With the economic expansion well underway, one big question remains: When will mortgage rates move toward 4% and higher?

I was very bullish on the economic recovery last year and bearish on the bond market; my peak forecast of the 10-year yield for 2021 was 1.94%. The question is, why are the bond market and mortgage rates still acting like the economy is in a low-growth phase with not much inflation?

After Sept. 30, 2020, mortgage rate pricing has gotten better compared to where it was during the COVID-19 crisis. Even though the 10-year yield has been going up since the lows of early August, mortgage rates have been going lower. Mortgage rates didn’t do much this last week with the hottest year-over-year growth print in both core and headline CPI  inflation in a long time.

In addition, Q1 GDP is running at 6.4%, and Q2 GDP is estimated to be between 8% and 10%. In theory, if you have a hot GDP and hot inflation data, then bond yields and mortgage rates should be much higher. Economic reflation is something I have been talking about on Twitter finance for a while. Due to the massive economic rebound we see post-COVID-19, we should expect hot short-term inflation data.

From the Bureau of Labor Statistics: 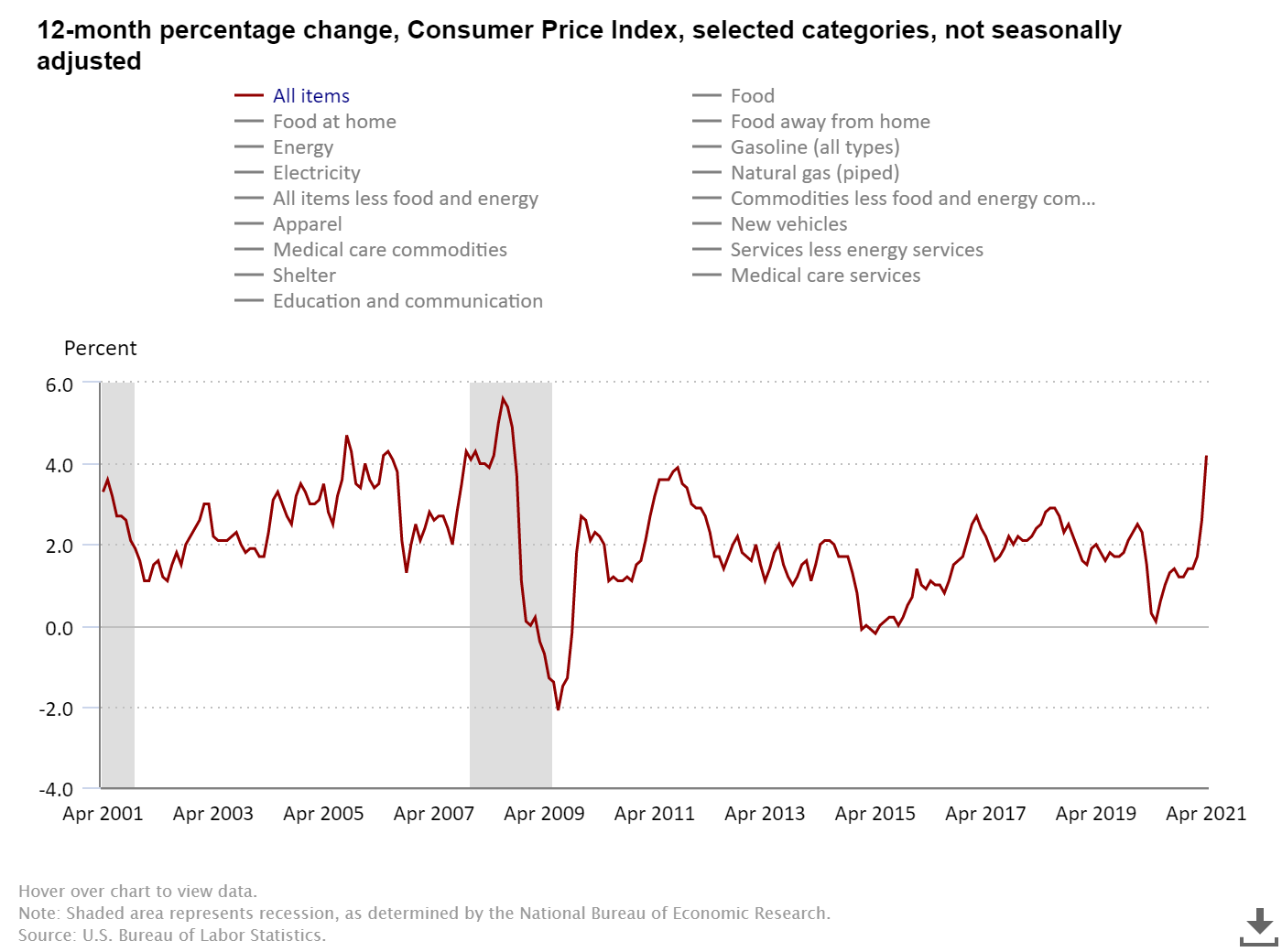 However, the inflation data should moderate as production levels catch up with the COVID-19 backlog. Also, the other way to deal with higher prices is that higher prices eventually impact demand. I capped my 10-year yield forecast at 1.94% for 2021. Rates and bond yields haven’t gone higher because the world economies have not recovered to the same extent as the U.S. Our edge against the world is that we have much better demographics for a mature wealthy economy, with both replacement workers and consumers.

Even so, we do not operate in a bubble. The U.S .economy is influenced by the health of other world economies, and our bond market and mortgage rates can be weighed down by them. 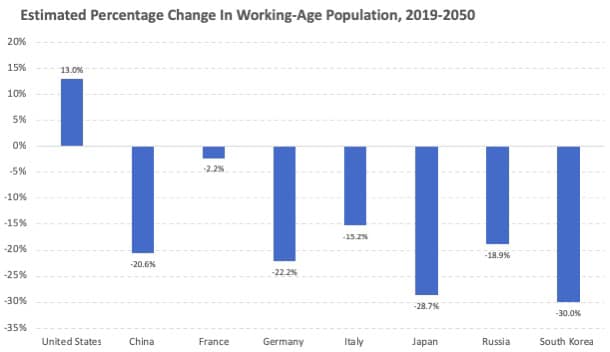 One sector of the U.S. economy that isn’t directly affected by other world economies because of our demographics is the housing market. In the years 2020-2024, the U.S. will have the most significant number of people ages 27 to 33 in our history, and the average age of a first-time homebuyer is 33 years old. At the same time, we currently have the lowest mortgage rates in history.

Thus, despite COVID-19, the demand for housing has been stable. This has not resulted in a credit boom. We do not see exceptional mortgage debt growth. But we do have a very healthy supply of replacement buyers each year. The major downside to this has been the too-hot home-price growth.

Before COVID, I wasn’t too concerned about breakaway home-price growth because the 10-year yield stayed in a channel between 1.60%-3% — which equates to about 3.5-4.75% mortgage rates. Those rates over 4% are high enough to keep home-price growth under control, especially past 4.5%.

I believed that 23% cumulative nominal home-price growth during the years 2020-2024 would be okay, but we will hit that number before 2021 is over if things continue the way they’ve been going. That’s too hot!

So, we have hotter-than-normal inflation data, and rates are still low, even with the rise of the 10-year yield. COVID-19 has kept global bond yields low in 2021, but for 2022, this no longer works as a legitimate reason. In the U.S., the peak rate of growth for a lot of economic data lines is already happening. We should expect the growth rate in manufacturing data and retail sales to cool because they’re doing very well and will need to moderate.

We are early in this economic expansion and the previous one was the longest in history. I don’t even want to bring up the word recession this early into the expansion and neither should you. With fiscal stimulus from an infrastructure plan ready to go for 2022 and excess savings, it will be interesting to see how much growth it will provide next year.

It’s too early to tell if we are creating a lower level range on the 10-year yield and whether mortgage rates might peak at a rate of 4.25%-4.5%. My take is that bond yields and mortgage rates should be higher, but taking into account the COVID-19 impact, I wouldn’t go above the critical level of 1.94% for 2021. However, 2022 should be a different story in theory.

I have considered 1.94% to be a critical level for the 10-year yield; since we inverted the yield curve in 2019 we never were able to break above that level since. So far, the 10-year has not breached that level, even with solid economic growth. We have had a four-decade run of mortgage rates going 2% + lower in each new economic cycle.

Mortgage rates got to 2.625%-2.75% during the COVID-19 crisis and were down to 3.25% at the low point in the previous expansion. We hadn’t had a stock market correction since the lows in March 2020, and the St. Louis Financial Stress Index has been stable at a low level for a long time. These two things can’t stay calm forever. I am keeping a close eye on both of these until the end of next year.

A stock market correction should drive rates lower, but the question we need to ask ourselves is that if we have created a new low-level range in the 10-year yield, then maybe we don’t see 5% mortgage rates in this expansion.

For me, the No. 1 thing I want to see in housing is for the rate of growth of pricing to cool off, which means more inventory and longer days on the market. I was looking for 3.75% and higher rates to do the trick in a meaningful way. Even just rising to 3.75% should be helpful. So far, no luck in that department.

It looks like we are at the end of the extreme low levels of inventory. But, we want to see total inventory levels go much higher than the levels we have now, not just a low-bar blip higher. It’s early in the year and we are about to reopen the economy with other countries making their push to get vaccination numbers higher. Personally, I believes bond yields and rates should be higher when the world economies are running at better capacity in 2022.

But what about demand this year? Good question.

Typically, I give an update on housing demand at this point in the year using the purchase application data as the gauge. In a “normal” cycle, I compare the current year to the previous for the period from the second week of January to the first week of May. After May, we expect total volumes in purchase applications to fall as they have every year but last year. Last year, as we all know, was an anomaly due to COVID-19.

For this year, we can expect to see a lot of negative year-over-year data in the second half of 2021 because we had a rebound in purchase applications in the second half of 2020. That rebound created unrealistically high comps, just like COVID-19 created an extreme low that has given us near 37% year over year on average the last eight weeks. On paper, 2021 looks like the best year in purchase applications during the heat months, showing, on average, 21% year-over-year growth. 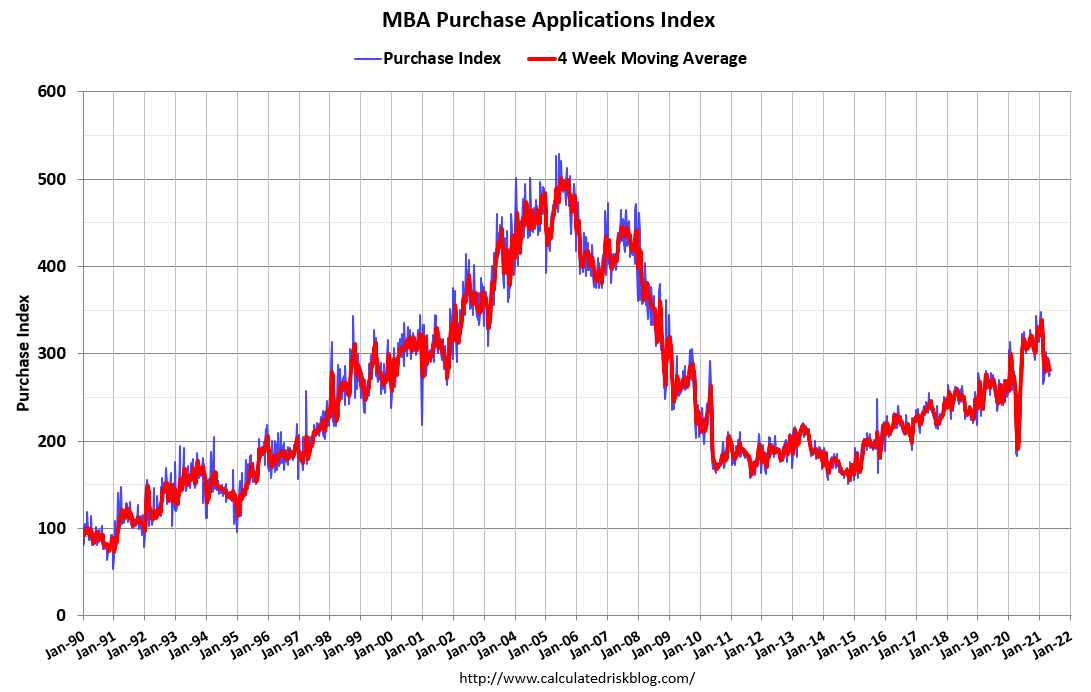 After I make some adjustments for the COVID-19 effect, purchase applications have mid single-digit numbers, which isn’t bad at all. It is still growth, but not the gangbusters of 21%. During the early part of 2021, we showed double-digit growth compared to the same months of 2020. These comps were hard to beat and we had about five weeks averaging near 16% year-over-year growth earlier this year.

I would attribute this to the make up demand from last year. As the market was rebounding, and if we had kept with the trend growth before COVID-19 hit, I was looking for existing home sales to end the year at 5,710,000 – 5,840,000. This is something I had written about last year but we ended the year at 5,640,000. So, give that extra push in growth to make up demand.

I believe that 3.75% and higher rates would cool the market as it has in the past, but it’s getting harder and harder to get rates to that level in 2021. In the meantime, I hope continuing price gains don’t do too much more damage this year. Inventory has bottomed out in certain spots of the U.S. — increases in inventory would also help cool price gains. Creating more days on the market would be the best thing to happen to this market, just like what we saw in 2013-2014 and 2018-2019.