One of the most unloved American economic success stories has been how spectacular American households with mortgage debt look today. Let’s take a look at the New York Federal Reserve’s Household Debt and Credit Report for the third quarter, released today.

The most important factor is that debt structures are vanilla.

Post-2010, lending standards in America became normal again, and while I still believe they’re very liberal, they’re sane. I can’t emphasize enough how critical this aspect is to the American economy. People who make the most money, excluding the 1% and 0.01%, usually have the most consumer debt because they’re homeowners.

What happened post-2010 is that exotic loan debt structures that don’t provide long-term fixed debt products left the system. This was very critical to not only the housing market but also the health of the U.S. economy. As you can see below, when you lend to the capacity to own the debt, you should never see a rise in foreclosures or bankruptcies unless a job loss recession happens on a massive scale. We can see a slow and steady positive downtrend in stressed financial data, unlike in the 2005-2008 period where people filed for bankruptcies and foreclosures without a job loss recession.

If there is one thing about consumer credit that I will put on top of the list, it’s this fact: dull, fixed low debt cost with rising wages is the sexiest economic firepower we have in America. Not only do we have better mortgage lending standards post-2010, but the 2005 Bankruptcy Reform laws also created better consumers. This one-two punch is great for America. If It weren’t for COVID-19, we would still be having the most prolonged economic and job expansion ever recorded in U.S history today. 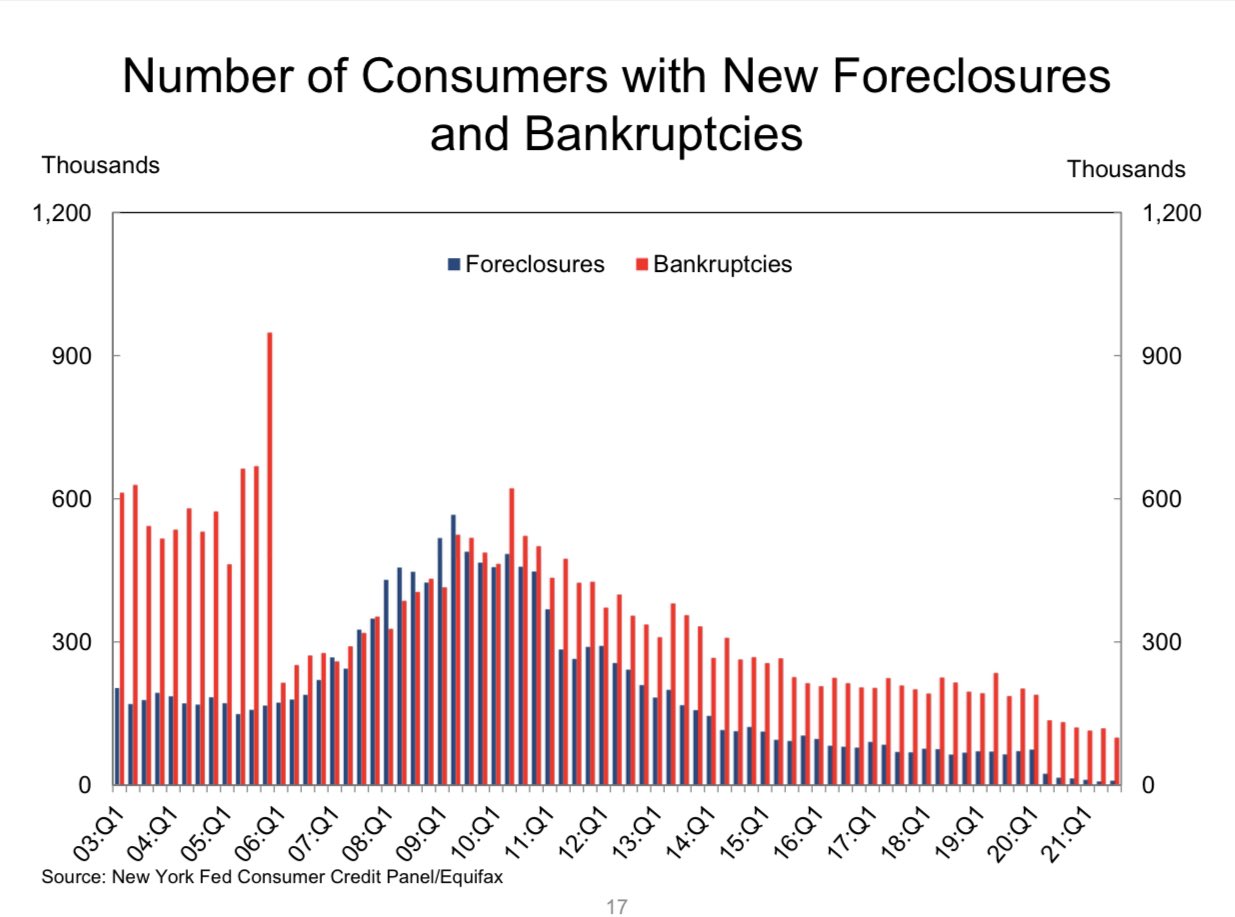 Mortgage debt never had boom after the bubble crash

Another aspect of consumer debt and mortgage debt that people don’t appreciate is that we never had a housing boom in credit or sales post-2010. Millions and millions of Americans buy homes every year as shelter cost, not an investment. When you don’t allow speculative debt products into the system, you can’t have an excess credit boom. Even during 2021, you can easily see we’ve never had a mortgage debt boom. 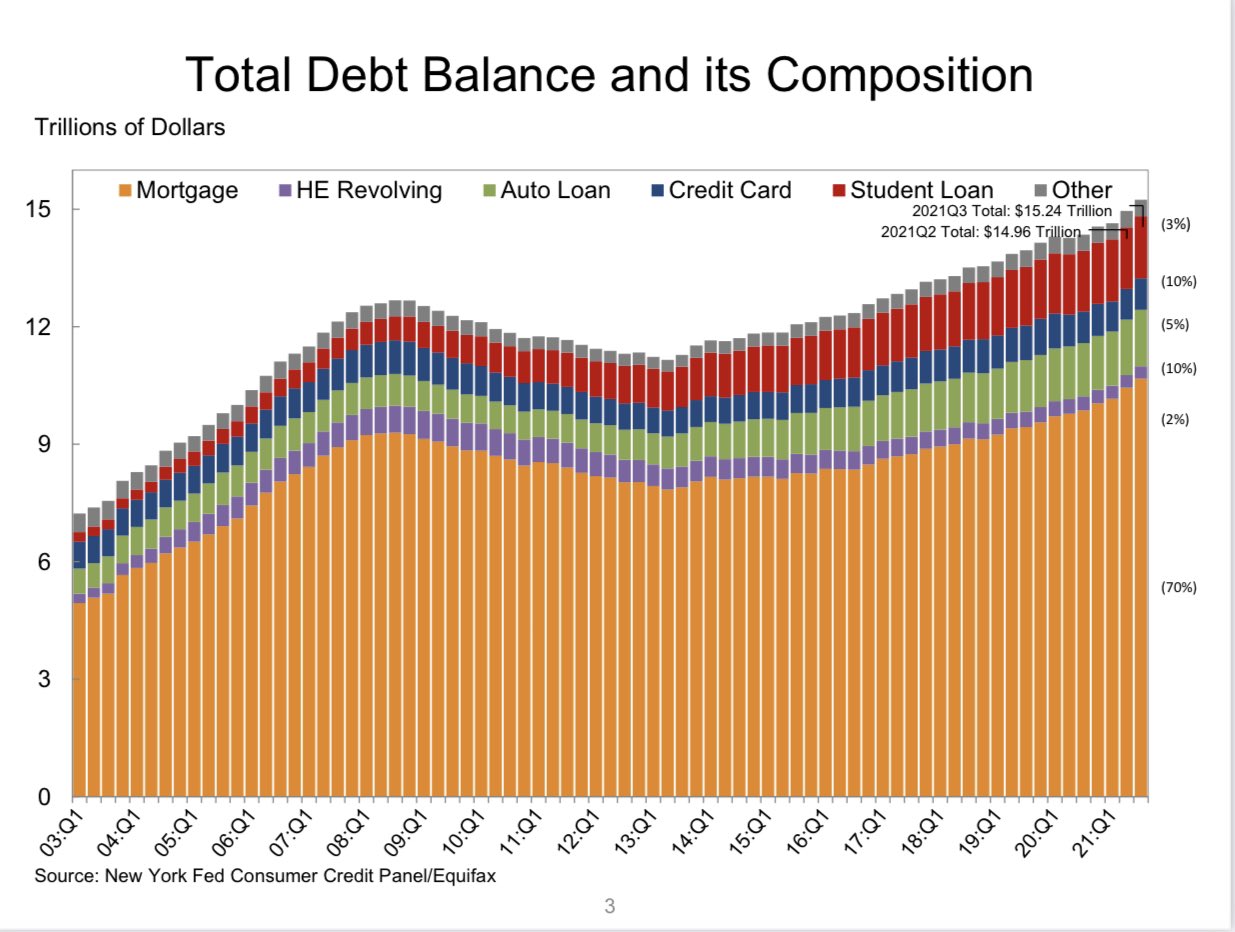 Purchase application data today from 2018-2021 looks different from what we saw from 2002-2005. Not to mention exotic loan ARM debt products, which ran between 33%-35% of loans given during the massive credit boom of those years but is now under 5%.

Americans have fixed low debt costs that have loan duration periods of 15-30 years with no exotic loan debt structure recast risk. While many people might argue with me and they think lending in America is tight, I disagree with that premise. Lending in America is outstanding again because we are lending to the capacity to own the debt. 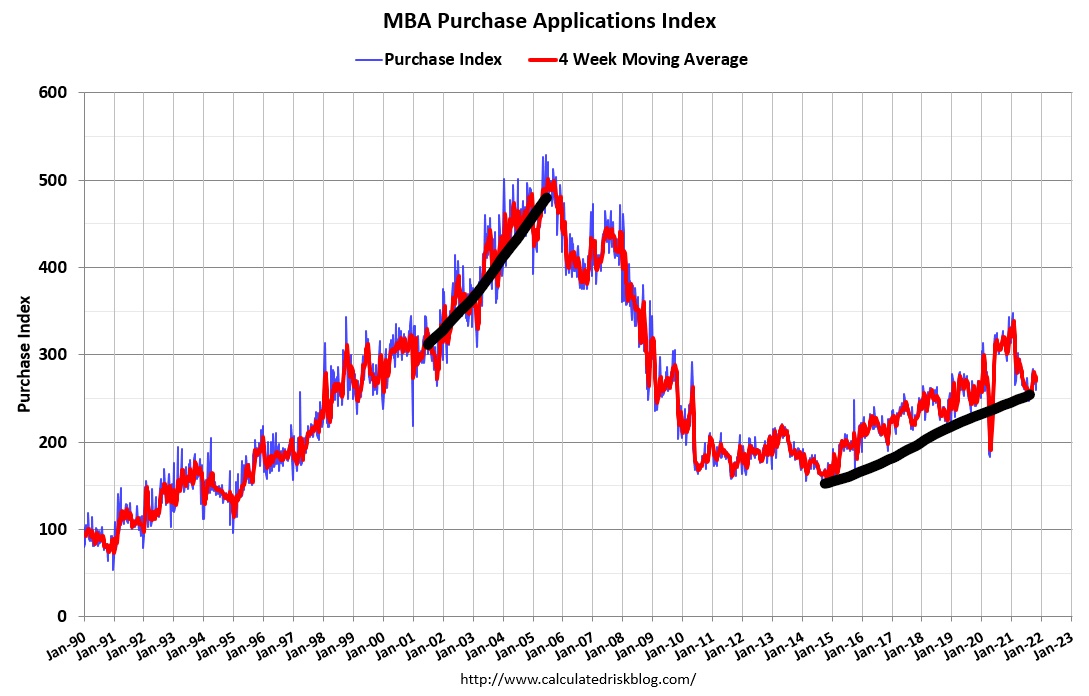 Recently on Twitter spaces, I had a lively debate with Kevin Erdmann of the Mercatus Center at George Mason University and Karl Smith on my thesis that tight residential lending America is one of the most significant false narrative discussions we will have in the 21st Century; you can listen to that debate here.

When you lend to the capacity to own the debt, the absolute risk in credit is what I call late-cycle lending. This is where banks give low downpayment loans to households right before a job loss recession occurs, and these homes don’t have enough selling equity to start with their families. In any case, the job loss recession ended last year and so far I see no actual red flags just yet in the economy. I recently went over that topic here.

Talk about flow; the one thing that beats my hair flow each day is how fantastic American household debt owners look today. Roughly 38% of all homes in America don’t have any mortgage debt, but the vast amount of housing stock with mortgages look as good as you can get on the data side. Since housing tenure is now over 10 years, just imagine all those times post-2010 that people took advantage of refinancing their homes while their wages grew over time.

Come on, people, you need to whistle at these charts; it’s a victory for the American economy today!

These homeowners have fixed low debt costs versus rising wages, which means they have excellent FICO scores, as you can see below. The sheer size of Americans with 760 plus FICO scores and a tiny fraction of those with sub-620 scores shows how we made American Lending Great Again. This isn’t something we should ever change, and I made it an oath of mine that if I genuinely believed we were setting up the country to fail on exotic loan debt structures again, I will be in Congress screaming how this needs to stop now. 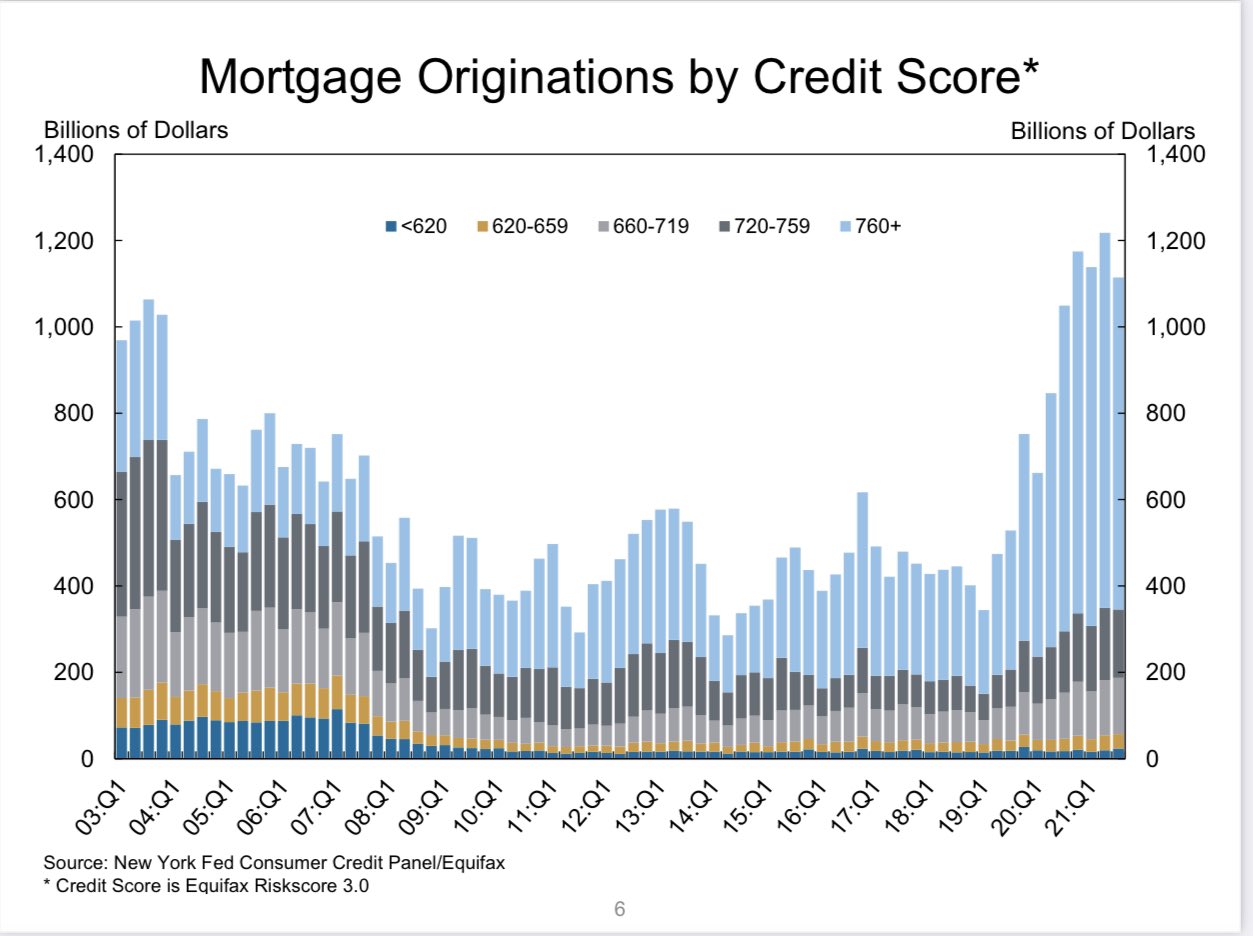 Whenever any report shows that people are pulling cash out of their homes, you see the troll camp armies come out in force, but you should ignore their typical “It’s 2008 all over again” campaign. Knowing the forbearance crash bros were going to do their song and dance, I wrote this article in March to let people know to ignore the dog-and-pony show.

Everything I said above about how consumer debt looks great applies to American households that cash out on their homes. Nothing about the debt structures today or the past few years resembles the madness we saw from 2003-2006. I know it’s hard for some people to let go of the past, but it’s time to move to another theme. A point that isn’t ever discussed is the reduction of HELOC balances and HELOC limits from the bubble years. Don’t forget this fact; it will make you look smart at your holiday parties. 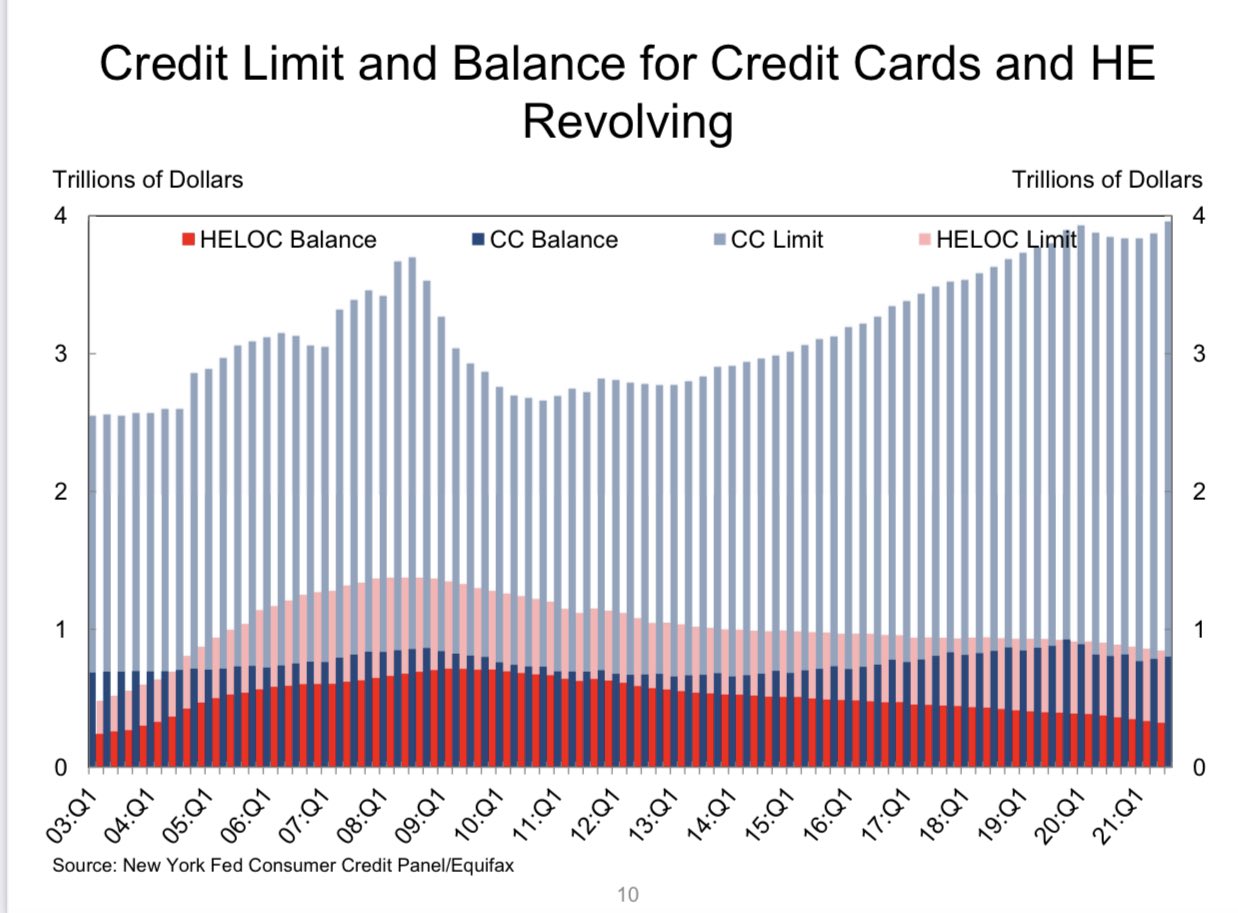 All in all, the theme here is that we made American mortgage lending great again, and the country benefited from it. We should always stay vigilant and make sure that lending stays very boring because boring is sexy when it comes to debt. You don’t want to deal with any recast exotic loan debt drama, folks — all it does is bring too much stress into your life. Thankfully, we never have gone back to that, and the economy has prospered for it.

This was a big reason why I knew the forbearance crash bros were going to fail epically. I mean, one data line in housing did crash; it was forbearance. As Black Knight reported, we went from a near 5 million loans in forbearance to on the verge of breaking under 1 million shortly. 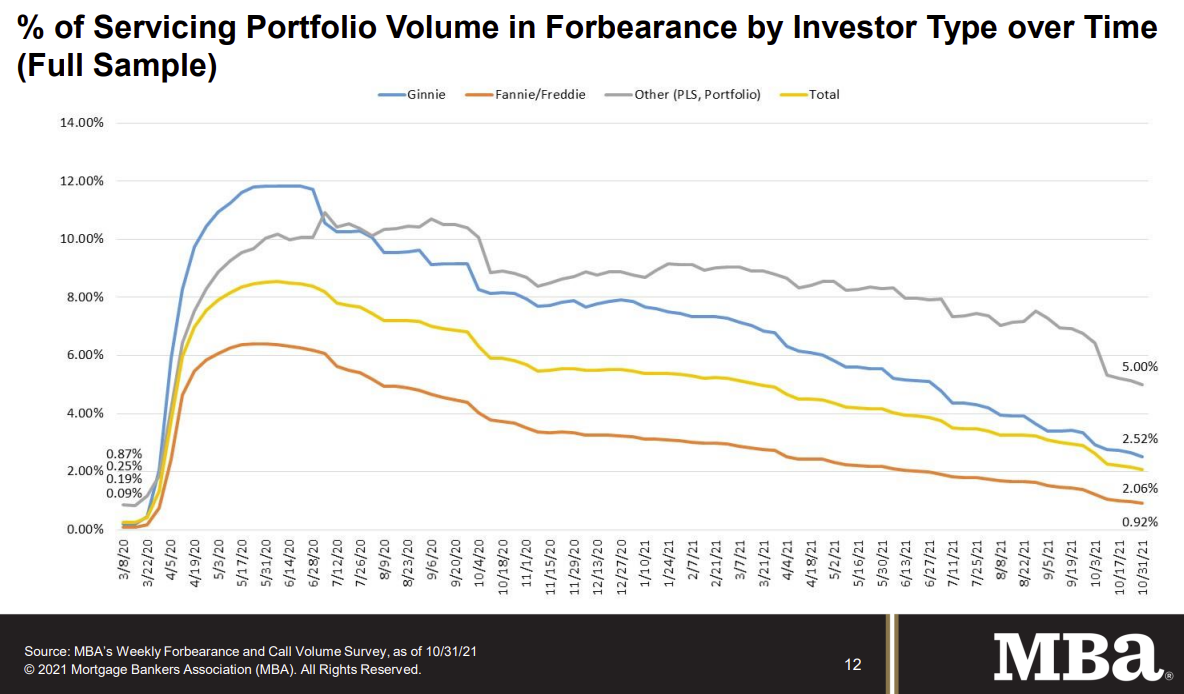 When you lend to the capacity to own the debt, you get the results above. Housing debt should always be very boring, just like the housing market. Because we made American lending great again, soon we should have a B&B housing market: boring and balanced.