One year ago this month, I coined the term forbearance crash bros, an updated name for the housing bubble boys who never got their housing crash in 2020 so they moved the collapse of housing to 2021. Many other articles were written in tribute to this wonderfully talented group of internet crash callers. As we are in September 2021, we can safely say the housing crash has been moved once again to next year. Let’s take a drive back down memory lane.

The National Bureau of Economic Research (NBER) declared that the COVID-19 economic recession in the U.S. ended in April 2020. The two-month COVID-19-caused recession represented both the sharpest and the shortest economic contraction in U.S. history. Despite the catastrophic and widespread collapse of economic activity the U.S. suffered, by April we were already showing signs of recovery. With the 10-year yield above 0.62 basis points, the St. Louis Stress Index began its recovery, spurring the creation of the America is back recovery model, which I wrote about on April 7, 2020.

But let’s not forget that hunkering down in that deep dark well of unknowns during the early days was a scary time — regardless of how much toilet paper and canned chili you were able to stockpile.

I get being scared in times of uncertainty, and for that reason, I have some sympathy for all those housing economic forecasters who predicted a crash. They are a sensitive lot who tend to frighten easily. We shouldn’t hold that against them – too much.

On the other hand, they got it so utterly wrong with their calls for a housing crash that when COVID-19 didn’t crash the market, they kicked the can toward next year. This was based on the idea that government-sponsored forbearance programs would lead to mass foreclosures once they ended. So far, that hasn’t happened either.

In honor of Labor Day, and the nearly 10 million job openings currently available, it seems appropriate to revisit what happened with the forbearance programs for distressed mortgage holders. Were these programs just another ill-advised government handout with yet-to-be-realized, unintended consequences, as my forbearance crash bros have predicted? Or, are these forbearance programs a genuinely good idea in a time of need?

You may remember that the extreme housing bears predicted that 10, 15, and possibly even 20 million mortgages would go into forbearance. This deluge of homeowners ditching their mortgage responsibilities was going to the tolling bell for the start of the next great depression in America. So what happened?

To address this question, let’s look at the current state of affairs. The nearly 5 million loans initially in forbearance collapsed to 1.71 million once employment numbers started to rebound. It seems like all those homeowners were not looking for an easy way out, but wanted to stay in their homes.

As far as the rest of the housing market, home sales have been at pre-cycle highs. Every existing home sales print has been higher in 2021 than the total levels of 2020 for the current home sales market. This means that demand is stable. But we knew this would be the case because from 2020 to 2024, the U.S. is enjoying the best demographics for home buying that we have ever had — at a time when mortgage rates are less than 4%.

So yes, the housing crash folks jumped the gun when they saw purchase application data collapsing. Housing data did sort-of, kind-of crash with the COVID-19 pause — but it was more of a freeze followed by a rapid thaw. Remember the childhood game Red Light, Green Light? Well, Covid called “red light” for about a minute, then got kicked off the playground, and it has been “green light” ever since. It was the forbearance data that crashed, not the housing market.

In retrospect, we can say that forbearance programs have been one of the most successful government-sponsored economic plans ever created to help American homeowners. It wasn’t greed or poor planning that put mortgage holders in jeopardy, it was a virus —a 100 nm particle that is 2000 times smaller than a dust mite. But for a while, that particle was calling the shots.

Since forbearance programs were such a success, why haven’t we used them before in times of economic crisis, one may ask? This question gets to the heart of why these programs helped to stabilize the market in 2020 but would need to be different for the housing bubble years.

It all comes back to debt structures!

We had a massive credit boom during the housing bubble years, which pushed sales and escalated home prices well above per-capita income. From 2002 to 2005, mortgage debt expanded and was comprised of a lot of exotic debt. Aside from the standard 30-year fixed loans that had typically made up most of the nation’s mortgage debt, we also added into the mix option ARM loans, 100% financing interest-only loans, non-traditional ARM products, and rampant cash-out refinances.

We had a four-year push in a significant credit expansion with exotic loan debt structure and massive speculation in housing. Today, we don’t have a credit boom in housing, although it may seem that way to those facing multiple-bid situations when trying to purchase. 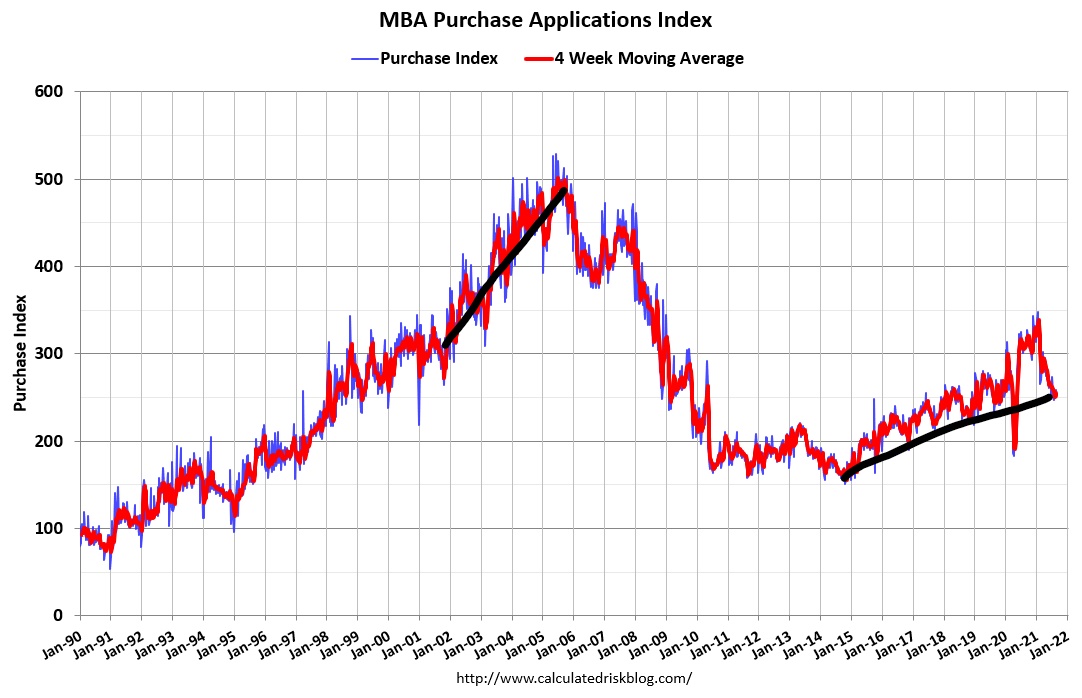 From 2010 to 2019, we had no growth in inflation-adjusted mortgage debt compared to the peak of the housing bubble years. 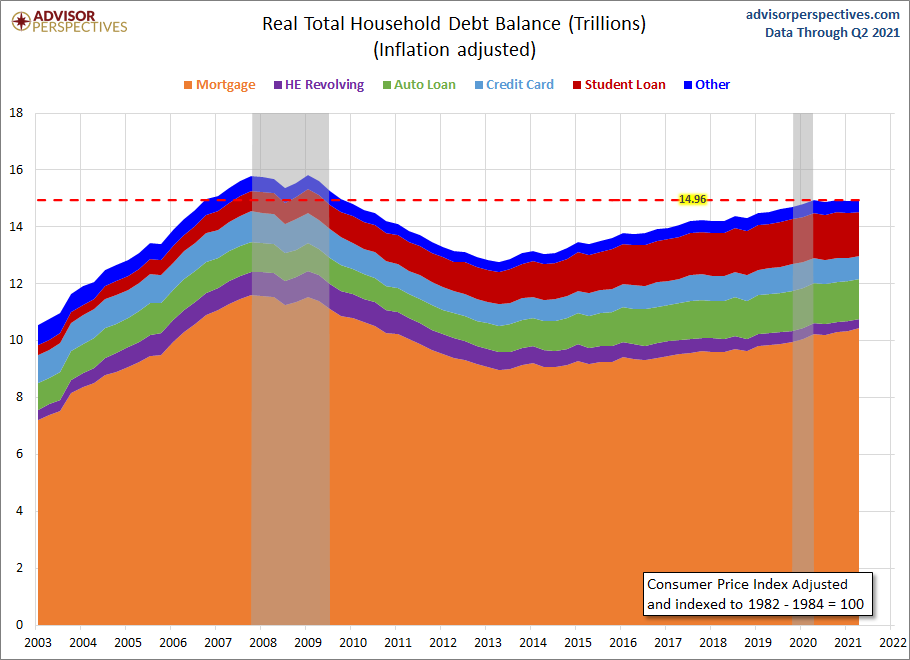 Millions of Americans bought homes each year, but the loans were traditional vanilla long-term fixed debt products. Over time, these homebuyers and owners refinanced their debt as their wages grew. These homeowners also tended to stay in their homes longer, building more equity as each year ticked by. Housing tenure grew, averaging over 10 years, which wasn’t the case from 1985 to 2007. FICO scores rose and debt payments as a percentage of household disposable incomes fell. 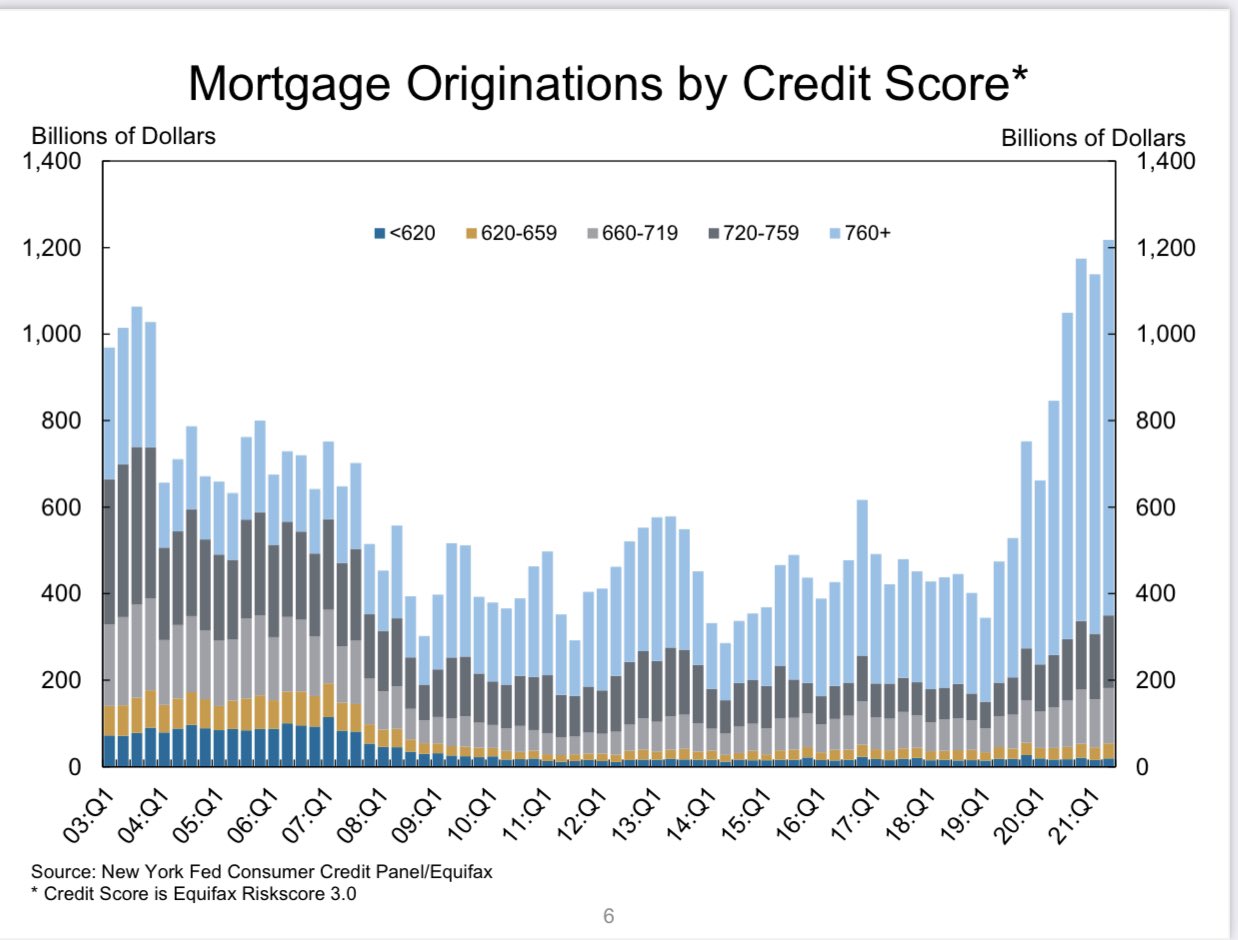 Mortgage payments versus rising wages look better as another wave of refinancing happened during COVID-19.

Because mortgage debt is the most significant portion of consumer debt in America, these households with mortgages have never looked better in U.S. history.

When the Covid crisis happened, a lot of folks assumed the housing market would somehow revert back to the 2008 crash mode. But the run-up to COVID-19 was completely different than the run-up to 2008. Our homeowner households in 2018, 2019, or the early months of 2020 before COVID-19 were not stretched to the max with exotic debt. They were in solid shape.

Then, in short order, housing demand came back. If a homeowner was truly distressed and needed to sell, there were plenty of buyers who were willing to bid over the asking price. During the housing bubble years before the recession, we had forced selling, with a rise of foreclosures and bankruptcies, rising inventory, and credit getting tighter. None of that is happening now.,

Suppose we look at foreclosures and bankruptcies from 2002-2008 and compare them to 2010 to 2020. Oh, what a difference a decade makes! When it comes to understanding the risks for housing, it is all about the credit profiles of the mortgage holders. 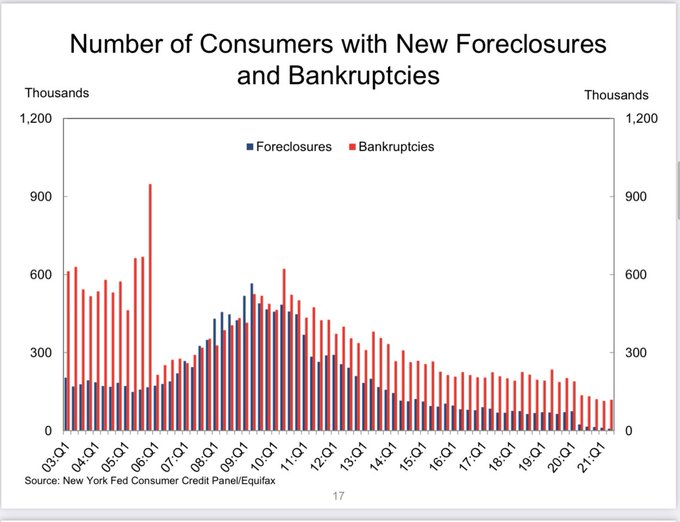 For those mortgage holders still in forbearance programs, there is a significant difference between forced selling when your home is underwater, mortgage rates are higher and there are unfavorable demographics, versus the current situation. It is a great time to sell and it will remain a great time to sell as inventory levels aren’t near 2006-2011 levels.

Granted, we still have a lot of work to do to get all the jobs back that we lost to COVID-19, but we are making good strides.

As a nation, we are still in the jobs recovery phase. Part of the unfairness of the COVID-19 crisis is that those who are still unemployed are more likely to be renters rather than homeowners.

Unemployment rates for persons 25 years and older by educational attainment: 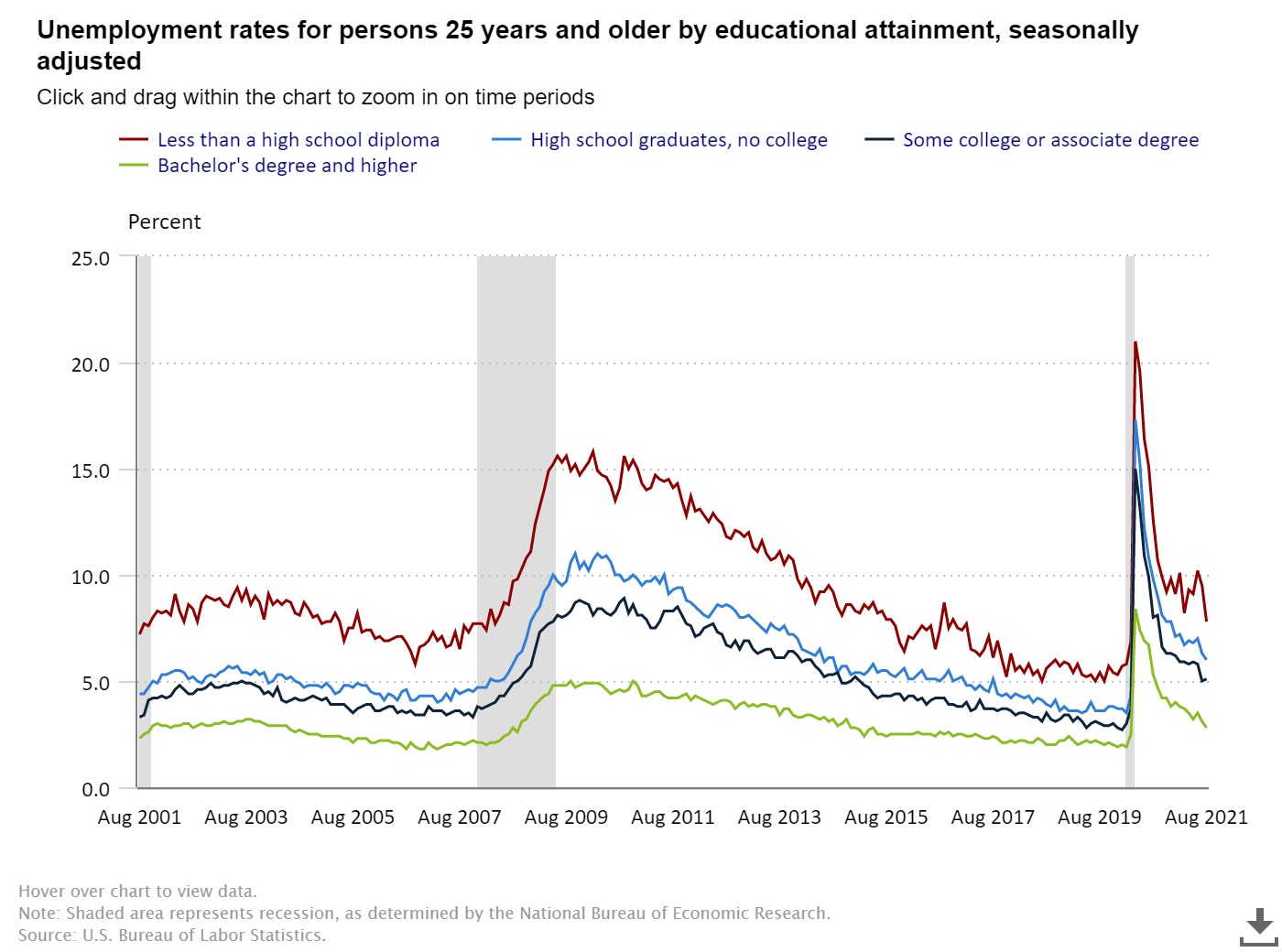 We now have over 10 million job openings nationwide. Compare this to 2008 to 2010, following the great financial crisis, when we had just over 2 million openings.

One likely outcome to the end of forbearance and the rent moratorium would be a rise in inventory. The single thing that could help the housing market now would be to see the seasonal rise in inventory remain rather than fade back in the fall and winter as it typically would. Inventory levels between 1.52 – 1.93 million will bring much-needed balance to the U.S. housing market. The current market is the most unhealthy market post-2010 because days on the market are still too low, even with the recent rise in inventory since February.

I believe price growth is on the verge of cooling only because the straight vertical price increase we have seen in the last months without retracement is rare. We should all be rooting for more inventory because we still have a massive demographic patch of Americans that need shelter.

By 2022, I anticipate that the number of loans in forbearance will be under 1 million and the GSEs’ loan delinquency levels will be under 1%. That’s a goal every America should be rooting for as a strong sign that we have moved past the Covid crisis. The COVID-19 forbearance programs were never going to match in numbers the 10 to 15 million distressed, credit leveraged households we had from 2006 to 2011. This is because we never had a credit boom from 2010 to 2020: our mortgage profiles were solid going into this crisis and our demographics are much better for home buying than they were in 2008 to 2019.

Despite COVID-19, credit never got tight in America, so people were still able to buy homes. As America started its recovery in April 2020, millions and millions of American homeowners were safe in their homes with fixed low debt costs. For the remaining, 1.71 million mortgage holders in forbearance, the motivation to get out of forbearance and back to paying their mortgage is growing each month as rent inflation picks up.

The National Association of Mortgage Brokers announced a series of roadshows in partnership with Freddie Mac and Rocket Pro TPO.