Back in April, when the COVID-19 data and unemployment numbers were at their worst, the housing bubble boys had a halfway legitimate 2020 housing market crash thesis. If unemployment rates had stayed between 20%-30%, the economic damage down to homeowners would have been epic. This could have led to a rapid increase in inventory on the market, which would have crashed home prices as demand collapsed.

That didn’t happen, of course.

Instead, the U.S. housing market has been the best-performing economic sector in the world during the pandemic. This alone should make you question those ridiculous bubble boy websites, the trolling Facebook friends, and those Youtube videos of the same ilk. (Those YouTube videos are especially egregious).

It is easy to go on Facebook, Twitter, or YouTube and say the current housing market is like 2008 all over again – but if you dig just a little bit deeper into the numbers, that thesis quickly falls apart.

Before we go into the data I believe it’s time to move the Housing Bubble Boys over to their new name: the Forbearance Housing Market Crash Bros.

There is one problem the forbearance housing market crash bros have now: jobs are coming back.

Only during the Great Depression of the 1930s was the employment rate more heartbreakingly bleak then it is now during the COVID-19 recession. Although methods of measurement may not have been as sophisticated then as they are now, the unemployment rate was estimated to have reached as high as 25%, with 15 million Americans unemployed in 1933.

The unemployment rate has also been inversely proportional to education level. Those with more education and in higher-paid positions have been less affected by job losses. The unemployment rate among those with less than a high school diploma is 12.6%, for those with a high school diploma it is 9.8%, for those with some college or an Associate’s degree it’s 8%, and for those with a Bachelor’s degree or higher, the rate stands at 5.3%.  From this, it is both intuitive and factual that the burden of job losses was shouldered more by workers with lower incomes. 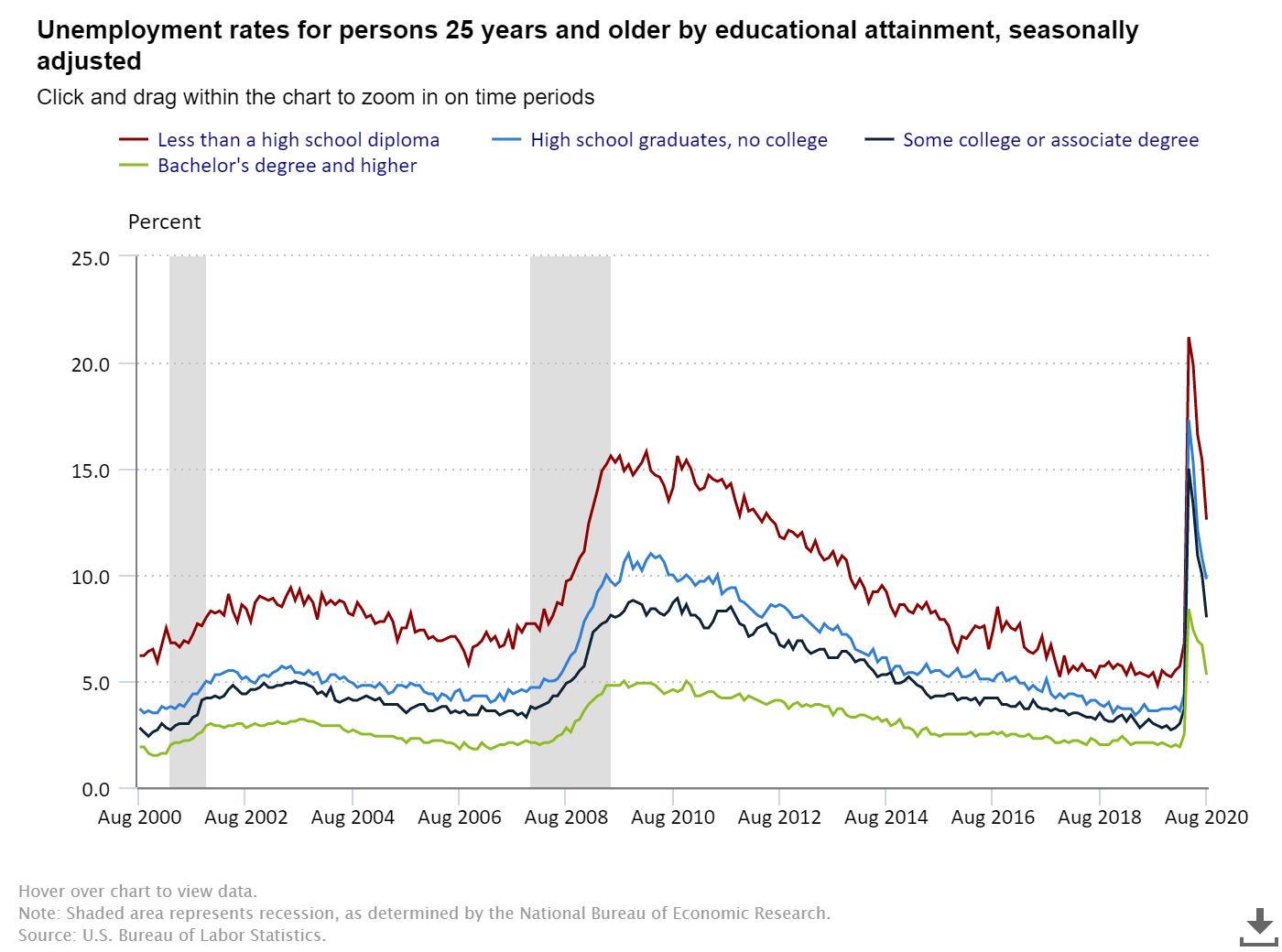 Because the unemployment crisis has been significantly worse for those with lower incomes, the economic consequences, too, have been considerably worse for renters compared to homeowners. Also, fiscal and monetary disaster relief along with forbearance are factors for why we should not expect a glut of foreclosures due to the high unemployment rate.

Remember, even with the high unemployment rate (which is back to single digits); we will have over 140 million Americans working and the existing home sales market needs 4 million new mortgage buyers a year to be stable.

To be sure, homeowners with mortgages did suffer job losses due to COVID-19. But we are still early in the job recovery process. As more Americans return to work, they are more likely to get off forbearance plans, though this may lag job gains by a few months. As long as job growth is positive and the U.S. government continues to financially and monetarily support the economy with disaster relief, it is doubtful the housing market will crash in 2021, even if the forbearance plans end, which is still a questionable outcome. Whoever wins the presidential race in 2020 might not want to see the forbearance plans expire if we are still far below the peak job numbers we had in February of 2020.

Since the peak, roughly 10.6 million jobs have been recovered. A healthy proportion of these job gains have been due to rehires for jobs that were lost, rather than newly created jobs – so this is the easier portion of the recovered employment. The more challenging work for the country is the creation of new jobs after we recover the remaining 11.5 million jobs needed to get back to the employment levels of February of 2020. Some of the jobs lost are not coming back so easily, as permanent job losses have increased to 3.4 million.

While we have had four months of job gains, the rate of growth is slowing. It’s impossible to have the U.S. economy and the world economies run like they did before COVID-19 while the virus is still active. Certain industries will be at a disadvantage versus the virus for many months to come while others do benefit from this crisis.

Sooner than later, we will earn the right to have more labor in the marketplace. Once the virus is under control of an effective vaccine, more labor will be needed as people can walk the earth freely again.

However, the most critical point I want to make here is that one of the biggest factors for the housing market crash thesis in 2020 was high unemployment and that is starting to fade. I urge my forbearance crash bros to be patient and wait until December of 2020. Then I can give you an actual model on how likely your 30%, 40% or 50% home-price crash thesis for 2021 will be.

Mortgage apps fell 7.1% from the previous week, following an increase in rates to the highest level since the pandemic onset, MBA says.