With a possible recession on the horizon, some believe that the real estate market will neither be the cause nor will the impact be as substantial as it was last time around, but that doesn't mean that housing will go unscathed.

According to Redfin, there are some metros that are more vulnerable than others to a housing downturn.

“Home prices are high right now, but they’re high because there’s not enough supply to meet demand, which means there’s not a bubble at risk of bursting,” said Redfin chief economist Daryl Fairweather. “Most of today’s financed homeowners have excellent credit and a cushion of home equity, making them unlikely to default on their mortgage even if their weekly grocery bill grows or their stock portfolio shrinks in the next recession.”

To ascertain which markets may be most at risk of a downturn in a recession, Redfin reviewed a number of factors (such as median home sale price-to-household income ratio; average loan-to-value ratio of homes sold in 2018; home price volatility, measured by the standard deviation of home prices year-to-year, and other factors) and assigned each market at risk score. The higher the risk score, the greater the risk that market will see a downturn in a recession.

The metro area at the most risk is Riverside, California. This West Coast metro has an overall score of 72.8%. Phoenix, Arizona follows with 69.8% and Miami at 69.5%.

Unfortunately, the areas that were hit the hardest by the Great Recession are more likely to get hit again this time around, Redfin said. Those areas include cities in Southern California, the Southwest and Florida, as these areas have home prices that are more volatile than other parts of the country.

“If the U.S. enters a recession in the next two years, it will likely be caused by the global trade war. U.S. industries that rely on exports, like the automotive industry and the agricultural industry, would be the most vulnerable and susceptible to layoffs,” Fairweather said.

Redfin found the Northeast and the Midwest to be the areas with the cities least at risk are located.

Providence, Rhode Island, although ranked No. 5, has the highest average home loan-to-value ratio of 70.6%.

The metro with the lowest risk of seeing a financial downturn is Rochester, New York. With an overall score of 30.4%, its fellow upstate neighbor, Buffalo, has a score of 31.9%, while Hartford, Connecticut has a score of 33.9%.

“Homeowners who are laid off may not be able to continue covering their monthly mortgage payment and may be forced to sell their homes,” Fairweather said. “And would-be homebuyers won’t feel so confident about making a big purchase when they don’t feel confident about their job security or their financial wellbeing. That could cause declines in home prices in markets whose economy depends on global trade, but home prices nationwide are likely to hold steady.” 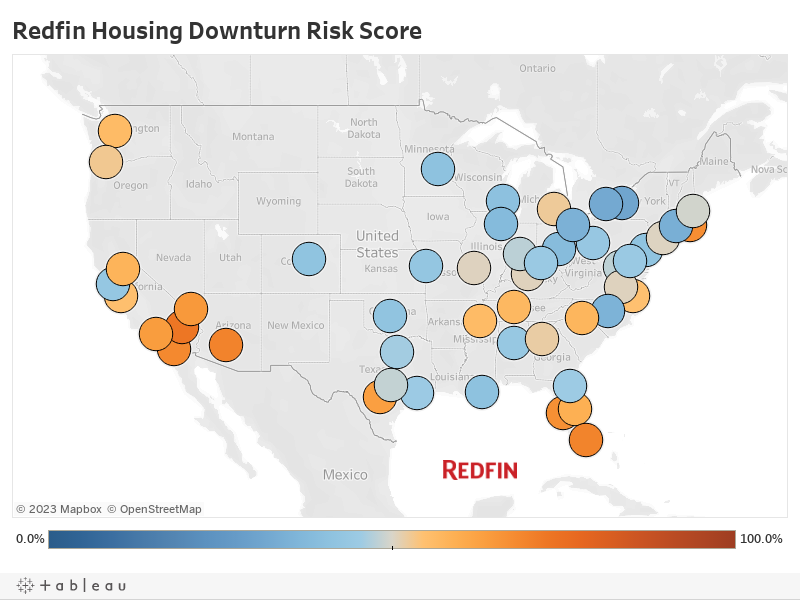