While apartment construction in Chicago has had its peaks and valleys, including falling to creating just 2,200 units annually between 2010 and 2012, Chicago’s annual apartment supply hit its highest level in 20 years during the second quarter of this year, according to new data from RealPage.

At the end of the second quarter, new supply volumes rose to 10,300, the highest volume of units Chicago has seen in 20 years. Record highs began to be set at the end of Q3 2016, at 6,000 units. Since then, Chicago’s market has seen a steady uptick.

The completion volumes continue to be driven by the urban development core, RealPage said.

Streeterville/River North is the No. 1 producer for apartments in Chicago, according to RealPage. In Q2, this submarket swelled by 40%. This submarket is also the most expensive, with monthly rents at $2,494 and annual rent growth a little more than the market average of 2.8%.

Throughout the economic cycle, Chicago has been constantly ranked as one of the highest producers.

Over 53,700 units have been built in Chicago since 2010, ranking the market No. 10 nationally for total cycle supply.

Streeterville/River North and The Loop both hovered around 14,000 units in this cycle. The next highest ranked was Lake County/Kenosha, at 3,526 units. 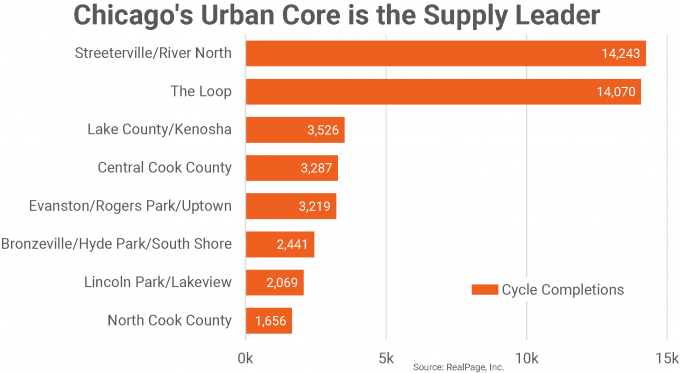