Remodeling activity across the nation has slowed in the last year, but some cities have bucked the trend and posted gains despite the nationwide housing slowdown.

According to the latest from housing data and analytics company BuildFax, remodeling activity increased in May in five of the top 10 metropolitan statistical areas – Philadelphia, Chicago, Los Angeles, Miami and Washington, D.C.

Philadelphia and Chicago saw the greatest gains year over year in remodeling activity, rising 15.2% and 5.06% respectively. Remodeling also grew a modest 1.57% in Los Angeles, 0.39% in Miami and 0.25% in Washington, D.C., according to BuildFax.

According to the report, Philadelphia stands out for resisting the national trend, posting gains and beating records for the number of houses sold from October to December 2018 when the rest of the country saw its housing activity decline. BuildFax said this could be attributed to increased domestic migration to the city or housing investments.

In Chicago and Los Angeles, where new construction activity has declined in the last year, we are likely seeing gains in remodeling because buyers are hesitant to enter the market and would rather reinvest in their current properties, BuildFax said.

Here is a map illustrating May’s remodeling activity in the top 10 major metros, courtesy of BuildFax: 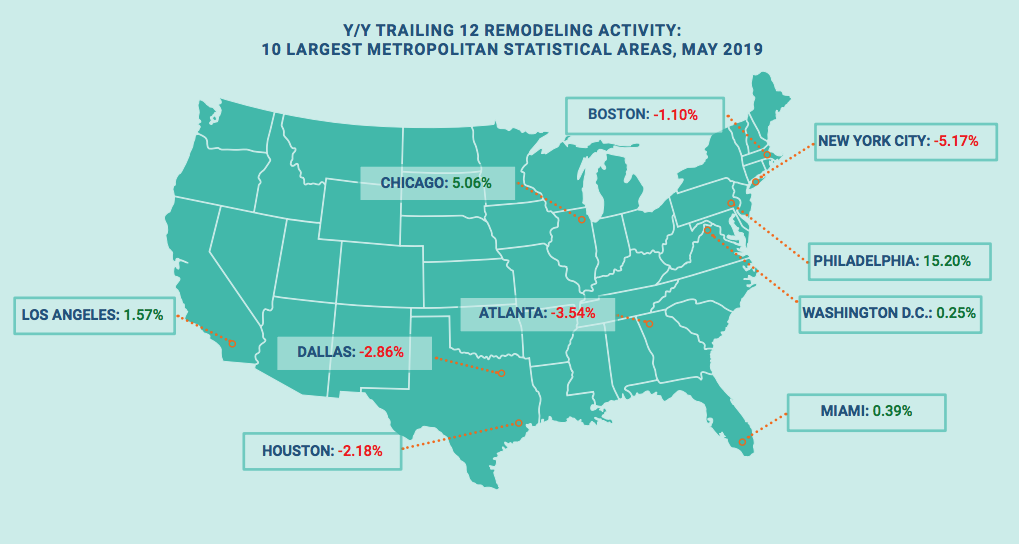 Abbe Will of Harvard’s Joint Center for Housing Studies said the residential remodeling market may be reaching a turning point after years of above-average growth.

“Nationwide slowdowns in house price gains, home sales activity, and building material sales are lowering our expectations for further increases in home improvement and repair spending in 2019,” Will said. “However, metro housing markets that have yet to fully recover from the 2009 economic downturn provide untapped potential for further growth, despite the broader deceleration we’re seeing nationally.”

But perhaps more telling is the fact that single-family housing authorizations have fallen 3.5% from last year, and the trailing three-month outlook – from March to May 2019 –decreased 4.76%, reflecting the sixth consecutive month of declining activity.

Single-family housing authorizations, much like housing starts, can be an early indicator of the economy’s health. With authorizations posting year-over-year declines, it’s clear that the nation is in a midst of a housing slump.

“The combination of declining mortgage rates, moderating home prices and peak home-buying season should help to buoy the housing market, but so far this hasn’t happened,” said BuildFax COO Jonathan Kanarek. “Continued declines in year-over-year maintenance and single-family housing authorizations further reinforce the ongoing housing slowdown. As we near six months of declining activity, the question remains, how long will this slump persist?”

Bond yields and mortgage rates have been falling since the weaker inflation data was released. We’re on the verge of rates dropping below 6%.