The pace of U.S. hiring slowed in March as employers fretted about a slowing economy and the goods-producing sector contracted.

Companies hired 129,000 employees, the smallest gain in 18 months, according to a report Wednesday from ADP and Moody's Analytics.

“The job market is weakening,” said Mark Zandi, chief economist of Moody’s Analytics. “Businesses are hiring cautiously as the economy is struggling with fading fiscal stimulus, the trade uncertainty, and the lagged impact of Fed tightening. If employment growth weakens much further, unemployment will begin to rise.”

Goods-producing jobs declined for the first time since the end of 2016. The construction industry shed 6,000 positions and manufacturing lost 2,000. The report measures the change in total non-farm private employment each month on a seasonally adjusted basis.

The biggest gains in March were in education, health care, and administrative services. The report also revised the number of private sector jobs added in February upward to 197,000 from 183,000.

Gross domestic product grew at a 2.2% annualized rate in the last three months of 2018, the Commerce Department said last week. Economist expect the pace slowed to 1.5% in the first quarter, the weakest in two years, according to a poll by Bloomberg.

The Federal Reserve last month cut its outlook for economic growth for the next two years and forecast no interest-rate hikes for 2019.

The ADP data comes ahead of the U.S. Labor Department's broader survey of non-farm payrolls on Friday, which measures both public and private-sector employment. 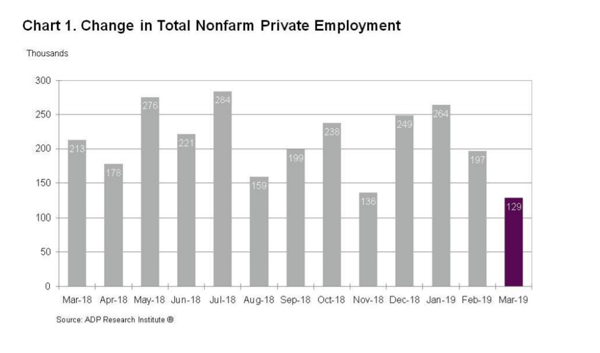