When it comes to the health of the economy, the housing market is the canary in the coal mine, providing clear and early clues of pending trouble. And that’s why analysts track its performance intently, looking at a multitude of indicators that might signal the looming recession some are forecasting.

Now, one critical clue from the housing market has emerged to suggest economic growth is likely to backslide, and that is a steady decline in single-family authorizations.

In essence: Construction activity appears to be slowing.

According to the latest data released by BuildFax, single-family housing authorizations fell for the third consecutive month in February, declining 4.24% from the previous month. This also represents a 5.75% decline year over year.

The data left BuildFax to conclude that, “without relief from this steady decline in single-family housing authorizations, an economic slowdown is likely forthcoming.”

But at the same time, spend for both maintenance and remodeling increased, which BuildFax attributed to recent spikes in construction labor costs.

Interestingly, some cities are defying national trends, posting increases in new construction and maintenance in February.

BuildFax said Chicago saw the greatest increases, with new construction up 60.15% and maintenance up 19.51%, which the report said could be a result of the city’s strategic five-year housing plan to solve affordability problems.

“It’s yet to be seen whether housing activity in these cities will eventually slow as it has on a national level or if these will be key metros to watch as the U.S. potentially heads towards an economic slowdown,” BuildFax wrote.

BuildFax CEO Holly Tachovsky said the performance of these indicators over the next several months will be key to determining the overall impact on the economy.

“There have been persistent declines across key housing indicators for four consecutive months. However, we anticipate some economic relief as we head into 2019’s spring home buying season,” Tachovsky said.

“Mortgage rates have reached recent lows leading to increased potential for home sales, which is oftentimes followed by a surge in remodeling activity,” she continued. “The performance of single-family housing authorizations, maintenance and remodeling activity through this next season will shed light on whether declines in the housing market will spread to the broader economy.”

Here is a map of new construction and maintenance activity in the 10 largest metros: 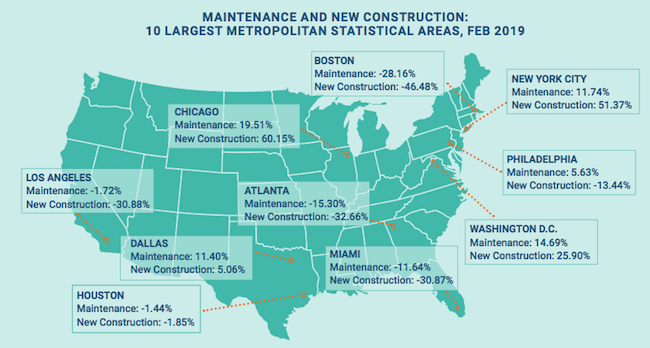