As the housing market continues to slow, it’s becoming more evident that the nation’s homebuyers are benefiting from the cool down.

In fact, according to a recent report from Redfin, the share of winning offers written by Redfin agents that included a sale contingency climbed to 7.1% in February.

February not only marks a five-month high, but the percentage is also more than two points higher than the same period in 2018.

This suggests home shoppers now have more buying power than they did in 2018.

Redfin agent Rheetu Pal Mahajan said this is because fewer buyers today are getting qualified to hold two mortgages simultaneously.

“They’re also concerned that they may not be able to sell their property easily so don’t want to take a chance," Mahajan continued. "On the sell side, listing agents are opening up to the idea."

Redfin notes the bump in sale contingencies is a sign that the market is moving closer to a balance between sellers and buyers.

Overall, this could mean not only are homebuyers facing less competition, but their agents are gaining more confidence in the market.

“This new balance of power is good for the housing market,” said Redfin Chief Economist Daryl Fairweather. “Some potential buyers were scared away last year when asked to waive an inspection or financing contingency. We may see more buyers come back now that the market is more in their favor.”

The image below highlights the share of Redfin’s sale contingencies: 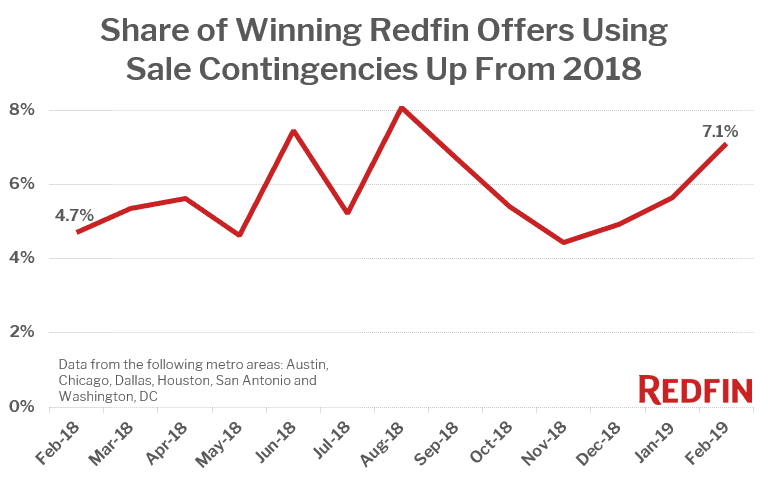