In December, the average home declined 0.8% in value since August 2018, equating to a loss of $2,440, according to the latest report from Black Knight.

December marked the 10th straight month of slowing home price appreciation, and in that month alone the average home lost $850 in value.

Black Knight estimates that home prices appreciated 4.6% in December, down from a high of 6.8% in February 2018. It predicts that January numbers will follow a similar trajectory.

Still, Black Knight points out that the rate of appreciation is still above the historical average.

“It’s important to keep in mind that annual growth is still outpacing the 25-year average of 3.9% – although the gap is closing quickly,” the report said, adding that the impact lower mortgage rates might have on home prices still remains to be seen.

While home prices are up year over year in all 50 states, a slowdown is glaringly apparent in California, where the annual rate of appreciation has fallen considerably from 10% in February 2018 to just 3% in December.

San Jose, Seattle and San Francisco are the metros that have seen the most drastic declines, Black Knight said, while Idaho and Nevada are reigning supreme with prices appreciating at 11.7% and 11%, respectively.

Here is a map illustrating the annual rate of home price appreciation across the country (click to enlarge): 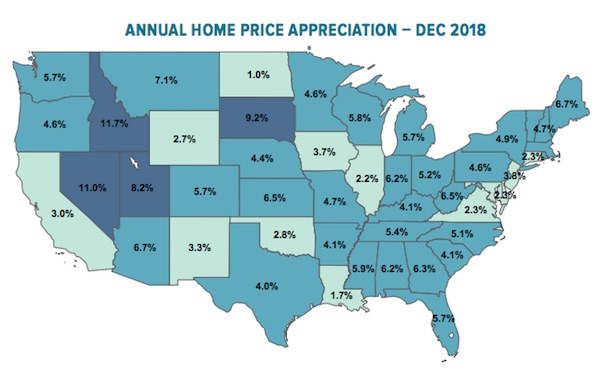