In the second half of 2018, the amount of homes selling above list price drastically retreated, according to new data from Zillow.

In December, only 19.4% of homes were sold above list price, marking a three-year low.

Furthermore, December was the seventh consecutive month to experience a rate drop.

“Both of these factors shifted in late 2018. Mortgage rates reached above 4.9% in November, the highest level since 2011, causing some buyers to be more conservative in their bidding,” Zillow writes. “The last months of 2018 also saw the first inventory gains in three years, alleviating some of the competitive pressure on buyers.”

“Among homes sold above list, the typical amount above list has remained above $6,000 for the last several years,” Zillow writes. “As of December, the median amount had dropped to $5,860, while the median discount for homes selling below list held steady.”

Zillow suggests this narrowing means buyers and sellers are syncing up on their price expectations. In fact, across the country, the share of homes that sold above list price has been moving between 15% and 25% since 2012.

That being said, Zillow makes note that national trends don’t always directly represent separate metropolitan data. This is because homes are selling above list price at higher frequencies in some metro areas.

“So while the seller’s market appears to be waning, it’s certainly not over, and this is not a result of weak demand,” Zillow writes. “Homes are more likely to sell at the listed price as a result of convergence in the market expectations of buyers and sellers.”

The image below highlights the metros that experienced increases in homes sold above list price: 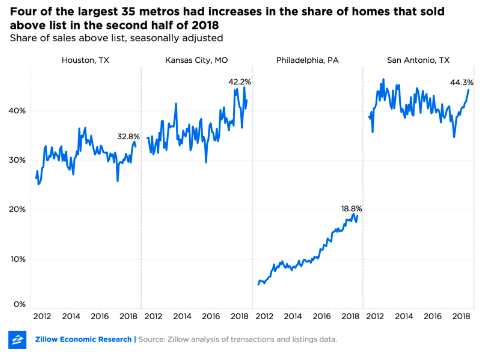