Although many Americans struggle to navigate the housing market's ups and downs, data suggests the path to homeownership for self-employed borrowers is especially difficult.

In a recently issued report, titled "The Continued Impact of the Housing Crisis on Self-Employed Households,” Urban Institute utilizes data from the American Community Survey to highlight the disparities self-employed borrowers face in comparison to salaried households.

“There is wide recognition that self-employed people find it more difficult to get approved for a mortgage than people who receive a regular paycheck,” Urban Institute writes. "The self-employed can be more difficult to underwrite in part because they, unlike salaried workers, experience greater income volatility and lack pay stubs or W-2 wage statements that make it easy for lenders to verify and document income.”

That being said, self-employed households statistically have higher median incomes than salaried households. However, they have also been slower at recovering from the recession. 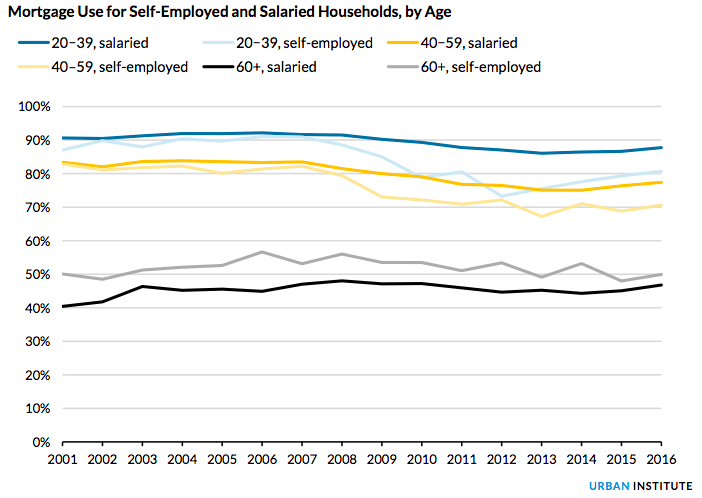 This is worrisome as calculations from the U.S. Census Bureau and First American, indicate that Millennials are now expected to purchase at least 10 million new homes over the next 10 years. These Millennials, who are often weighed down by student loan debt, will more than likely need mortgages to make their homeownership dreams a reality.

Unfortunately, when compared to every age group, Urban Institute states that self-employed households of prime homebuying age, are the ones whose likelihood of having a mortgage have fallen the most since the housing crisis.