The Federal Reserve elected to raise the federal funds rate three times so far in 2018, three times in 2017 and once in 2016, but Goldman Sachs says it still has five rate hikes to go.

An analysis by Goldman Sachs forecasts that the Fed will raise rates by 25 basis points five or more times before it’s done.

This year, most experts expect the Fed to raise rates one more time in December, bringing the total number of rate hikes to four for 2018. Many experts predicted this would be the case, including Capital Economics and the Mortgage Bankers Association.

The federal funds rate currently rests at 2.25%, and has been increasingly slowly over the past couple years as the Federal Open Markets Committee usually elects to raise rates by 25 basis points at a time.

In a note sent to clients, Goldman Sachs explained it expects job creation to reach its breakeven pace in early to mid 2020, and the unemployment rate will fall to just 3%, as the chart below shows. This breakeven pace would be 90,000 jobs per month, about half the rate of recent growth. 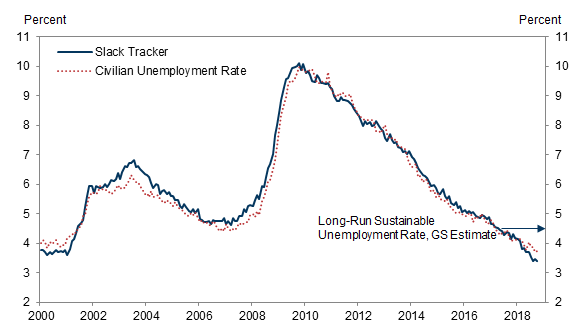 “The Fed is unlikely to conclude the hiking cycle unless it is reassured that the labor market overshoot doesn’t grow much further,” the note, authored by Goldman Sachs analysts Jan Hatzius, Alec Phillips and David Mericle, states. “Following the remarkable momentum in job growth, we update our estimate of the breakeven payroll pace that stabilizes the unemployment rate and estimate how long it will likely take before we get there.”

But the report concedes its forecast of five more rate hikes is tilted to the upside.

In fact, many economists are predicting an economic slowdown beginning as soon as 2019. Capital Economics even predicts the Fed will lower interest rates in 2020.