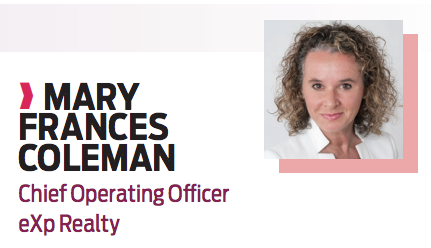 eXp, Coleman served as CEO and president of Realty Executives Phoenix and vice president of HomeSmart International.  eXp saw that she could make a bigger and positive impact, and she was promoted to COO shortly thereafter. Now, Coleman works closely with eXp founder Glenn Sanford to manage the company’s growth while maintaining the best agent-owner experience possible.

Coleman has since played a key role in several of the company’s accomplishments, helping to double the company’s agents in seven months to more than 10,000, and expanding to four new states. With her help, revenue increased 188% in 2017 to $156.1 million, up from $53.6 million in 2016.

Many of her largest contributions are behind the scenes, such as putting in place an operational excellence plan to make sure everyone in the entire company is thinking about how to build a sustainable competitive advantage through operations management. She is also actively working on, and seeing early success in, agent onboarding, transactions and commissions, policies and procedures and maximizing resources. Coleman also hired a number of key leaders to sustain and increase growth, including an executive director of education to build eXp Realty University’s education and training program, and a senior vice president of brokerage operations who is responsible for all brokerage operations, including compliance, risk management and state license laws.

At eXp Realty, Coleman quickly took on a key leadership role, providing immediate value by improving company operations. She organized the leadership team to come up with immediate and long-term goals around the ongoing sustainability of the company. As a result, the company is one team marching toward one main goal and working on operational excellence in defined initiatives.

Coleman speaks at numerous events empowering and supporting female executives in business, teaches continuing education across the U.S. for Realtor associations and attorneys and speaks at organizations on how to provide service as a leader. She was appointed to the Education Advisory committee for the State of Arizona Department of Real Estate, appointed chair for the Professional Standards Committee and created a company called the Organization of Service Professionals to teach business owners how to create a service plan with their business plan.

She is also on the board of directors for the Southwest Shakespeare Company and continues to support the arts by performing and volunteering. She helped implement a peer mediation and dispute resolution program for high school students through the Arizona Bar Association, training kids on resolving conflict through mediation instead of violence or bullying.

Whether you’re a broker or a real estate agent, having a deep knowledge of your market is impressive. Here’s how to get there: