New construction surged in March, however the increase did not carry over into the single-family sector, according to the latest report from the U.S. Census Bureau.

Privately owned housing starts increased to a seasonally adjusted annual rate of 1.32 million in March. This is up 1.9% from February’s 1.3 million in February and up a full 10.9% from 1.19 million starts in March 2017.

However, these increases did not transfer over to single-family housing starts, which decreased 3.7% from 900,000 in February to 867,000 in March, according to the report.

“Total housing starts are important for economic growth, but single-family starts are the key to replenishing our severely depleted housing inventory,” realtor.com Chief Economist Danielle Hale said. “In March, while the total number of starts grew to 1.32 million we saw single-family housing starts slip to 867,000, behind where we should be.”

“Last month’s single family starts are less than half of what we saw during the peak in early 2006 and roughly 30% below normal,” Hale said.

However, once again, these increases were all in the multifamily sector. Single-family authorizations decreased 5.5% from 889,000 in February to 840,000 authorizations in March.

“The change towards multi-family could be the initial signs that affordability is starting to impact the mix of construction,” LendingTree Chief Economist Tendayi Kapfidze said. “Multifamily units are at lower price points and include significant rental units.”

But some experts saw March’s report as good news.

“Results for housing starts and permits released this morning reflect a double dose of good news,” PwC Principal Scott Volling said. “First, the disappointing February numbers for starts were revised upward almost 5% from 1,236,000 to 1,295,000, while permits were also revised upward almost 2% from 1,298,000 to 1,321,000. The upward revisions bring February results closer to original expectations after a strong January.”

“Second, March results improved over February's revised numbers, with starts increasing 1.9% to 1,319,000 while permits grew 2.5% to 1,354,000,” Volling said. “Impressively, both starts and permits showed sizable gains when compared to March of last year, with starts higher by 10.9% and permits higher by 7.5%.”

And another expert explained that the housing market could soon see an increase in home inventory.

“Two important trends signal that some modest relief for the housing supply shortage is on the way,” said Mark Fleming, First American Financial Corp. chief economist. “The continued year-over-year growth in completions means more homes on the market in the short-term and the dramatic rise in construction employment this month indicates housing construction is likely to increase in the months ahead.”

The chart below from First American shows the correlation between housing starts and construction employment. 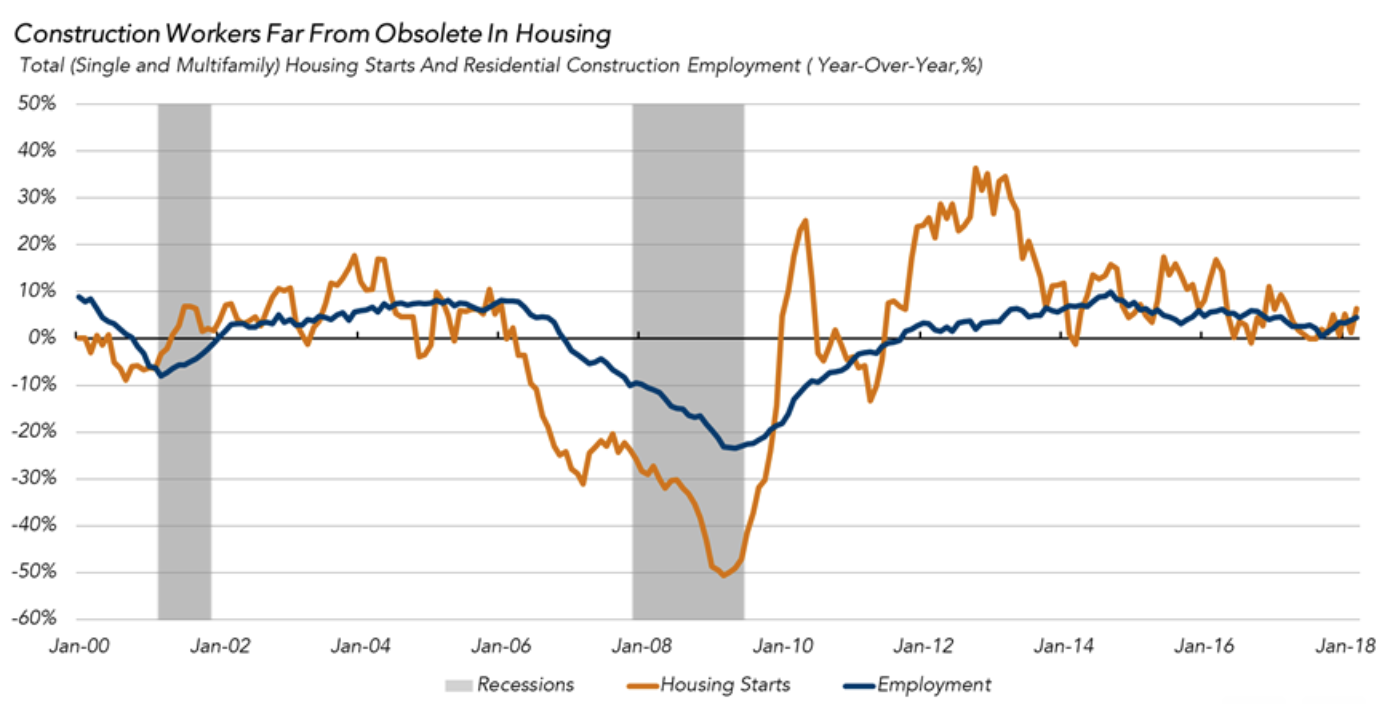