The U.S. Department of Housing and Urban Development announced it is awarding a record $28 billion to help nine states, Puerto Rico and the U.S. Virgin Islands recover from major disasters.

HUD explained it will address seriously damaged housing, businesses and infrastructure from major disasters that occurred since 2015.

The amount represents the largest single amount of disaster recovery assistance in HUD’s history and includes more than $12 billion for major disasters that occurred in 2017 and nearly $16 billion to support mitigation activities in areas that experienced major presidentially declared disasters since 2015.

Mitigation can broadly be described as actions taken to protect communities from the predictable damage from future events.

“It’s clear that a number of states and local communities are still struggling to recover from a variety of natural disasters that occurred in the past three years,” HUD Secretary Ben Carson said. “These grants will help rebuild communities impacted by past disasters and will also protect them from major disasters in the future.”

The chart below shows how the funds will be distributed, by both location and by the year the disaster occurred. 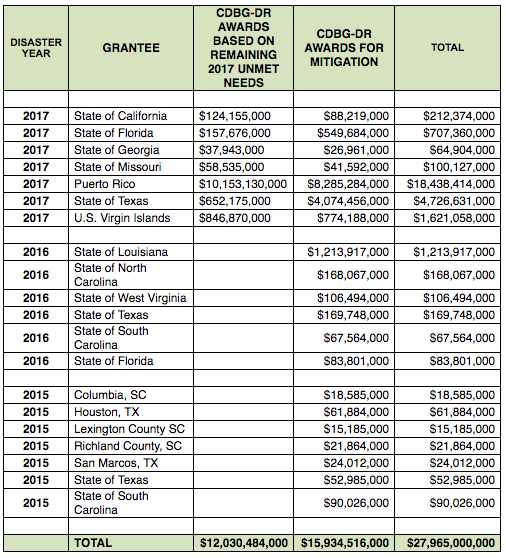 HousingWire looks at who were the top 15 mortgage lenders in America by number of loans and dollar volume in 2020. We also look at purchase vs refi.