Home prices increased in October, and experts are beginning to fear 2018 could lock many potential buyers out of the housing market, forcing them to rent, according to the latest report released by S&P Dow Jones Indices and CoreLogic.

Home prices increased 6.2% annually in October, up from September’s annual increase of 6.1%, according to the latest S&P CoreLogic Case-Shiller Indices report.

The chart below shows the National Home Price Index already surpassed its previous peak and continues to hit new highs, while the 10-City and 20-City Composites remain below their 2006 peak, but are quickly catching up. 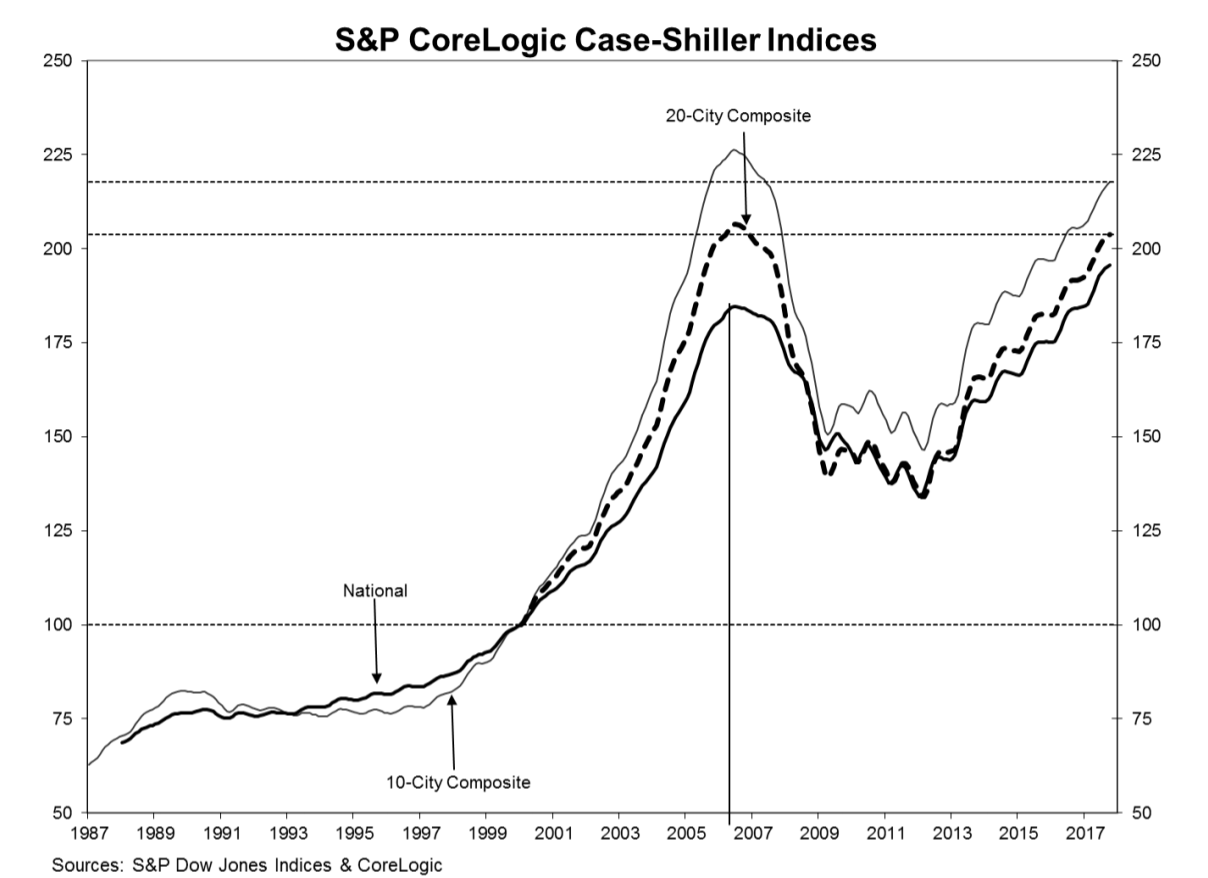 “Home prices continue their climb supported by low inventories and increasing sales,” said David Blitzer, at S&P Dow Jones Indices managing director and chairman of the Index Committee. “Nationally, home prices are up 6.2% in the 12 months to October, three times the rate of inflation.”

“Sales of existing homes dropped 6.1% from March through September; they have since rebounded 8.4% in November,” Blitzer said. “Inventories measured by months-supply of homes for sale dropped from the tight level of 4.2 months last summer to only 3.4 months in November.”

Before seasonal inflation, the National index, 10-City and 20-City Composites all posted a monthly gain of 0.2% in October. After seasonal adjustment, all three indices increased 0.7% during the month.

“Underlying the rising prices for both new and existing homes are low interest rates, low unemployment and continuing economic growth,” Blitzer said. “Some of these favorable factors may shift in 2018. The Fed is widely expected to raise the Fed funds rate three more times to reach 2% by the end of the New Year.”

“Since home prices are rising faster than wages, salaries, and inflation, some areas could see potential home buyers compelled to look at renting,” he said. “Data published by the Urban Institute suggests that in some West coast cities with rapidly rising home prices, renting is more attractive than buying.”

As home prices continue to increase, they push affordability lower, which remains at its lowest in 10 years in spite of recent improvements.

Despite increasing home prices, housing affordability improved in many markets the third quarter of 2017, but the national average remains at a decade-low, according to the Q3 2017 U.S. Home Affordability Index from ATTOM Data Solutions, a multi-sourced property database.

One expert explained the housing market is currently going strong, but it may not be able to continue at its current pace, saying it is questionable if the “good times” will last into 2018.

“The last few months of 2017 have clearly demonstrated the extent to which the housing market refuses to be knocked off its stride,” Zillow Senior Economist Aaron Terrazas said. “Sales of existing homes have risen strongly and unexpectedly, despite a severe and worsening shortage of homes actually available to buy. An economy that keeps adding jobs and wages that continue to grow both have consumers feeling confident.”

“The housing market’s resistance to these headwinds is a testament to the enduring value Americans place on homeownership,” Terrazas said. “Whether and how long the housing market can continue to defy gravity, and whether the good times last into 2018, remain open questions. But for now, the fundamentals driving the market today look unlikely to change any time soon.”