This years is shaping up to outpace expectations thanks to a resilience in refinance demand, especially when it comes to cash-out transactions.

According to Freddie Mac’s May Economic and Housing Research Outlook report, 2017 is performing so well that its increased its 2017 forecast for mortgage originations by just over $200 billion and added $100 billion to our 2018 forecast.

The year started out with a surprise uptick in refinance borrowers took cash out, increasing to 49% in the first quarter of 2017, which is up from 44% in the fourth quarter of 2016.

Freddie noted that this is the highest share since the fourth quarter of 2008.

However, it cautioned that the data is still below the peak of 89% in the third quarter of 2006.

The data doesn’t come as a shock though given that home prices have long been on the rise. The Federal Housing Finance Agency’s latest home price report showed that seasonally adjusted monthly index for March was up 0.6% from February.

But despite volume increasing in recent quarters, it is still below the peak of $84 billion in the second quarter of 2006.

Plus, continually low interest rates are majorly contributing the strength in the housing market. Mortgage rates for the 30-year fixed-rate mortgage reached as high as 4.3% in March.

Since then, rates have declined about a quarter of a percentage point to right around 4% where they have been holding in recent weeks. This won’t stick around forever though, as mortgage rates are likely to head higher later this year.

"Despite weak economic growth, housing got off to a good start in 2017 because low mortgage rates have given the spring homebuying season a pleasant surprise,” said Sean Becketti, chief economist with Freddie Mac.

“Mortgage rates started March just above 4% and have mostly drifted lower since then, even falling below 4%. With home sales, housing starts and home values up, 2017 is shaping up to be the best year for housing in over a decade,” said Becketti.

The chart below is an updated version on Freddie’s forecasts for the year, which includes real GDP, mortgage rates, housing starts and home sales. 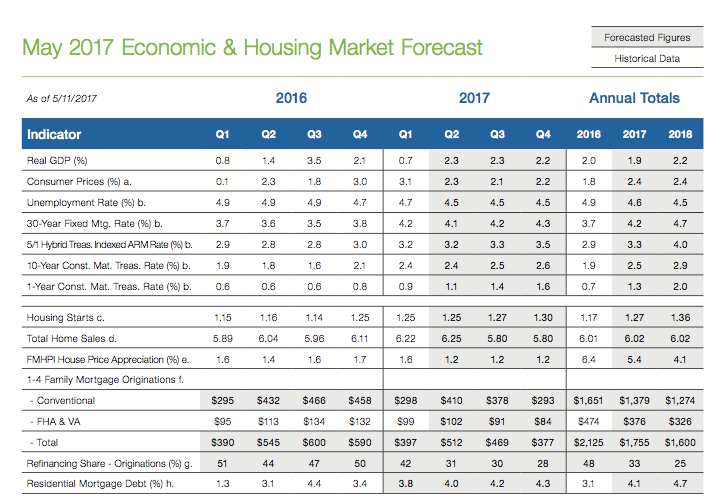