Nearly nine years later, this is where the two government-sponsored enterprises remain, with little meaningful effort over the years to change the status quo.

A handful of people under the current administration, including Treasury Secretary Steve Mnuchin, have all publically stated that GSE reform is a priority of this administration.

As the largest trade group in the mortgage finance space, the Mortgage Bankers Association released its white paper, “GSE Reform: Creating a Sustainable, More Vibrant Secondary Mortgage Market,” to stay in front of the conversation and fight for the best outcome for the industry.

The MBA’s “Task Force for a Future Secondary Mortgage Market,” which is made up of some of the top lenders and insurers in the industry, developed the white paper to offer a specific vision of the end-state of the GSEs, as well as transition steps to a post-GSE system.

The white paper also includes a discussion of the role of the secondary market in advancing an affordable housing strategy.

The 60-page white paper, found here, is a follow-up to the first-look paper the MBA released back in January, which gave a small preview of what they think GSE reform should look like.

During a call with the media on Thursday, David Stevens, MBA president and CEO, said that the MBA realized after looking at the efforts of Johnson-Crapo, Corker-Warner and the PATH act that legislators needed more guidance in the reform process.

The two Senate GSE reform plans – Corker-Warner and Johnson-Crapo – and the one House version, the PATH Act, are the three major plans out there on reforming the GSEs.  An overview of the three options is available here.

Stevens noted in the call though that nobody has written a distinct and specific pathway on how you get to that end-state of reform.

This white paper is designed to address that hole: the transition.

Stevens said, “This the most detailed paper that we think is out there on GSE reform. We think it can be used as a significant and important advisory document.”

It took the MBA more than a year to put the paper together, adding the timing of its release coincides well with the growing talk in Congress for reform.

Stevens added in a follow-up call that there are two ways to looks at reform. “You can stand on the sidelines or you can get in the game.”

He also strongly encouraged people to read the full white paper rather than assume they know what it says, reiterating that the task force that developed the paper represents a broad cross-section of the residential and multifamily real estate finance industries, including entities of varying sizes and business models.

The paper breaks down specific areas that reform should address. These are simply overviews of key principle. Check out the full paper for more information.

The chart below is a snapshot from the white paper and gives a quick view of keys factors in the MBA’s GSE reform plans, comparing how the GSEs operated before and after conservatorship. 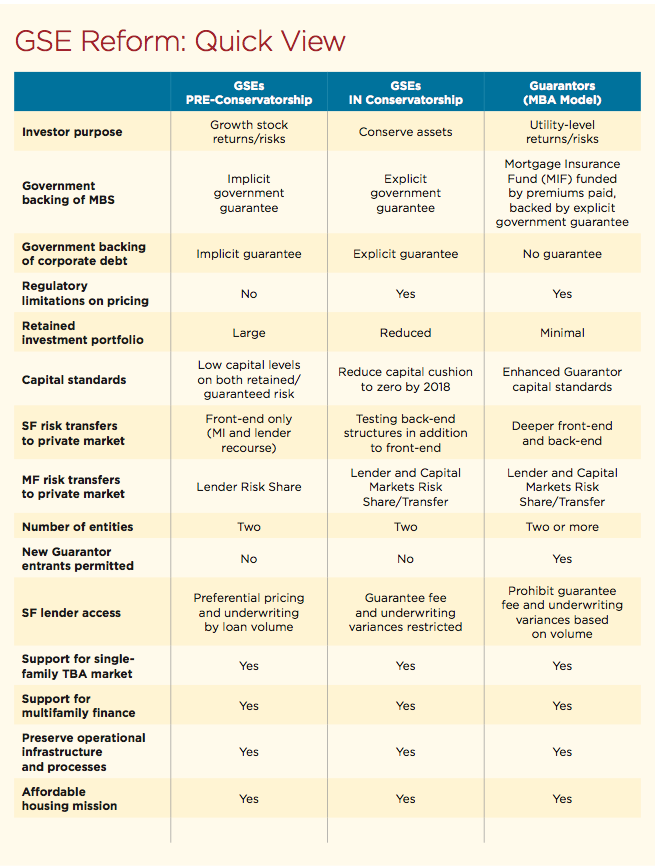 Another key item in the MBA’s GSE reform plans is its focus on affordable housing.

Stevens asked the question, “How do you make certain the new model would responsibly provide sustainable and affordable credit?”

This is an area that has not been fully resolved in past discussions.

The paper emphasizes that a viable plan for addressing affordable-housing needs is a political requirement for bipartisan GSE reform.

“This plan sets out three critical affordable-housing missions and then charges the future regulator with assessing market conditions and developing a plan to meet these missions,” the paper stated. “The plan would be implemented with measurable goals that are enforceable against the Guarantors. An affordable-housing fee, charged against  the new business purchases of the Guarantors, would play an important supplemental role.”

Rodrigo Lopez, 2017 MBA chairman and executive chairman of NorthMarq Capital, said the transition period could take between five to 10 years, and the timing is important since the current administration is already tackling GSE reform now.

Lopez said he expects Congress to start working on plans for GSE reform toward the end of this year or the early part of 2018.

The paper concludes, “Ultimately, GSE reform holds promise to create a more vibrant and sustainable housing finance system that can enhance the lives of millions of Americans and help stabilize the housing market for decades to come. The hard work of reform should proceed without delay.”