“How do we make real estate sexy like South By Southwest is,” Sean Dobson, chairman and CEO of Amherst Holdings, joked at his company’s session at the renowned conference in Austin.

The data and analytics company for the real estate industry is on an extremely short list of housing-affiliated companies attending the two-week conference, hosting a one-day event during it to bring housing into mainstream conversation.  And who else but HousingWire would be there to cover it all? No one, that's who.

Here's how it all went down:

South By Southwest is famous for bringing musicians, artists and entertainment groups to the capital of Texas, flooding the city for two weeks. To name drop a couple, the list includes The Chainsmokers and Hanson.

However, while entertainment runs the show at SXSW, Dobson pointed out that when it comes to where Americans spend their money, these “entertainment” companies only make up 5% of total spending. In comparison, housing makes up 25% of where most people spend their money.

Yet innovation is slow to adopt in housing, he stated, unlike in some other financial services.

Dobson noted that is this the first year for Amherst to attend SXSW (and HousingWire for that matter ;-). But for Amherst, the time is now to start moving discussions — typically been held within the housing industry — into a mainstream discussion among the world's most innovative thinkers and entrepreneurs.

Check back later for further coverage on the conference, including notes from former Department of Housing and Urban Development Secretary Julián Castro, who attended the conference as a panelist.

The picture below shows the panel that featured both Dobson and Castro. 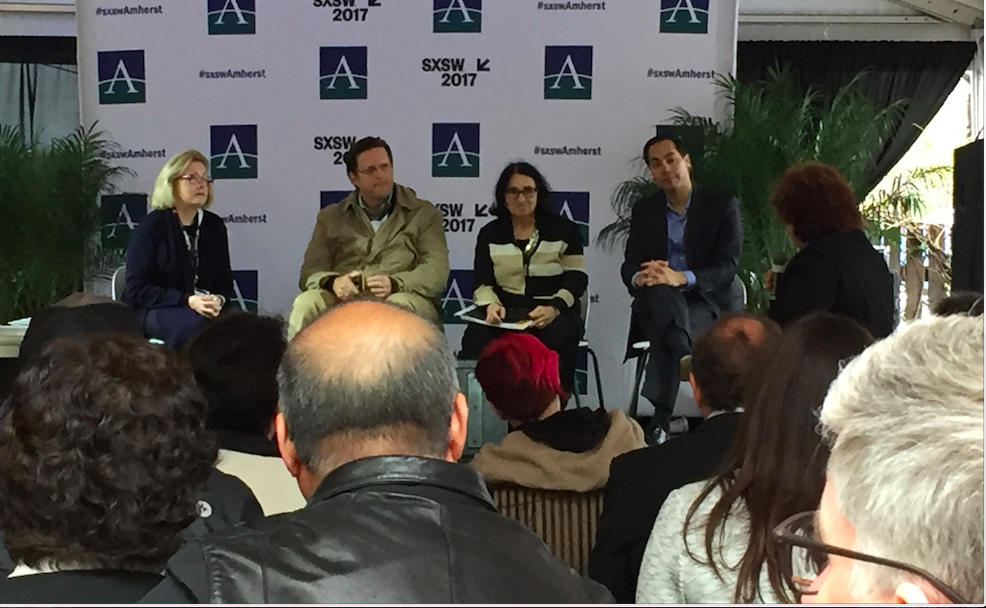 Regulation is the new buzzword under President Donald Trump as he has already announced a presidential memorandum and executive order to significantly reduce regulation.

However, not only is President Trump still within his first 100 days in office, but he is significantly behind his predecessors when it comes to having his team finalized.

Cabinet nominations are taking significantly longer than in the past. To put this in perspective, Michael Thompson, managing director of government with Goldman Sachs, recently stated that even with the nominations not yet closed, there are already more “no” votes on cabinet members compared to the eight years both former President George W. Bush and former President Barack Obama were in office.

The lack of authority in key positions and uncertainty is not only generating some confusion around regulation for the industry, but it’s also creating regulatory confusion in government.

Rep. Maxine Waters, D-Calif., ranking member of the Committee on Financial Services, along with 21 Democrats on the Committee, sent a letter to Federal Reserve Chair Janet Yellen, requesting that the Fed continue fulfilling all of its mandates under the law despite there not yet being a Vice Chair for Supervision yet.

This includes the ongoing review of existing rules that could help responsible community banks, and updating other regulations as may be appropriate.

The Democrats wrote the letter after House Financial Services Committee Chairman Rep. Jeb Hensarling, R-Texas, and other committee Republicans sent a letter to the Federal Reserve that urged them to stop all regulatory activity until a Vice Chair for Supervision has been nominated and confirmed.

To Democrats, the request would cause the Fed to neglect its responsibilities under the law.

We will closely monitor the Federal Reserve Board’s actions in the coming weeks and months to ensure that the duties Congress has tasked it with by law are fully and appropriately carried out.  The Federal Reserve Board must not wait to exercise its proper regulatory authority to impose the strictest standards on the largest, most complex banks that pose the greatest risk to our financial system while reducing any unnecessary compliance requirements for community banks throughout the country.

The Trump administration did manage to announce a handful of newly selected people to join Steven Mnuchin, head of the Department of the Treasury, on Friday.

People should hopefully know by Monday morning that daylight saving time was this Sunday. If not, it’s likely that you’re running late to work or some other appointment since clocks moved forward an hour.

But as people recover from the hour in sleep they lost, an article in Bloomberg by Ben Steverman in Bloomberg explained daylight saving time isn’t really all that great.

Besides having a precious hour of sleep hour, can you list what benefits there are to daylight saving time?

Here’s the article’s argument for why daylight saving time is becoming out of date.

The case for daylight saving time has been shaky for a while. The biannual time change was originally implemented to save energy. Yet dozens of studies around the world have found that changing the clocks has either minuscule or non-existent effects on energy use. After Indiana finally implemented daylight saving, something that didn't happen until 2006, residents actually used more electricity.

Daylight saving time isn’t just a benign relic of the 1970s energy crisis. The latest research suggests the time change can be harmful to our health and cost us money. The effects are most disruptive in the spring and fall, right after the time changes occur.

As an added bonus from the article, if people want to experience what life is like without daylight saving time, move to Hawaii or Arizona, the two states that do not participate.

HouseCanary and Google Cloud Platform Commercial Datasets collaborated together to help bring housing data and information to a broader audience.

Getting its start back in 2014, HouseCanary is a provider of real estate insights and predictive analytics and is designed to help people make better real estate decisions.

HouseCanary, thanks to the collaboration, will power residential real estate datasets for Google Cloud Platform.

“Making HouseCanary’s platform available in the cloud gives investors greater access to a vast amount of real estate data and analyses they can act on in real time,” said Jeremy Sicklick, CEO of HouseCanary.

“By joining the Google Cloud Technology Partner program, HouseCanary is expanding its services to help businesses of all sizes understand different real estate markets around the country and modernize how they make investment and lending decisions,” he continued.

Looking at this week’s schedule, Wednesday marks the much-anticipated Federal Open Market Committee meeting announcement. This is the second Federal Reserve meeting of the year, and according to industry experts, it’s extremely like the Fed will announce an interest rate hike.

Capital Economics Chief Economist Paul Ashworth recently stated that the February jobs report should’ve erased any lingering doubts that the Fed might not raise interest rates in the March meeting.

Outside of the Fed meeting, the industry can also look forward to the newest housing starts report this Thursday.

Here are the 2020 HousingWire Vanguards

This year’s Vanguards are filled with success stories – the executives that made it to the top, and now dominate the housing industry. Flip through to read their stories.