Student loan debt is playing its biggest role in the mortgage process yet, and it doesn’t look like it’s changing anytime soon. After all, many Millennials have yet to finish college, and the tail end of the generation is barely 18.

But while student debt has a bigger role, it’s not necessarily the worst thing to ever happen to housing.

Currently, new data from NeighborWorks America’s fourth annual housing survey found that nearly one-third (30%) of Americans know someone who has delayed the purchase of a home because of student loan debt, up from 28% in 2015 and just 24% in 2014.

The data also cited that more than half (53%) of potential home buyers with student loan debt said the debt was somewhat or very much an obstacle to buying a home, down slightly from 57% in 2015, but above the 49% rate in 2014.

This chart displays the data over the past three years. 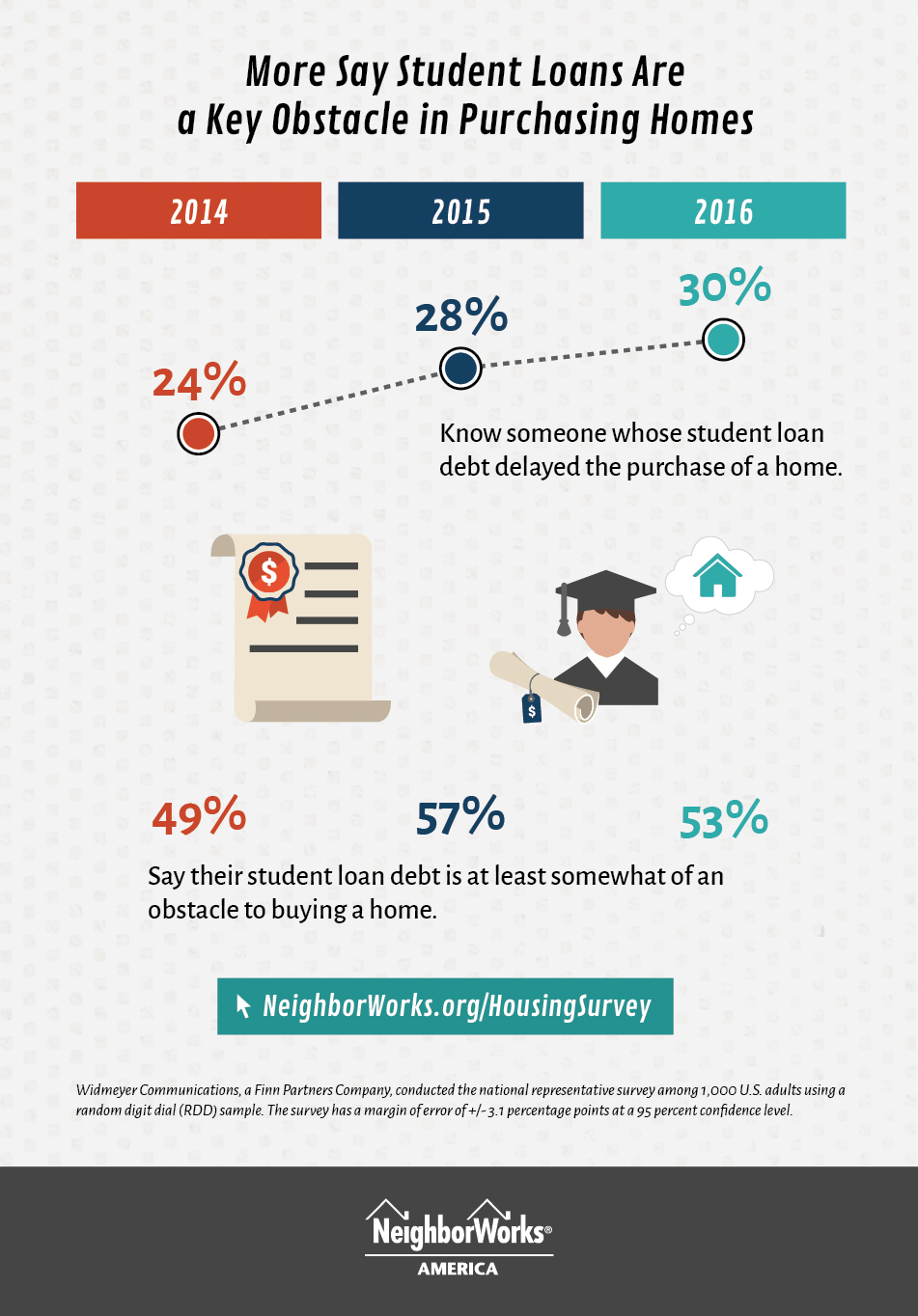 As a whole, to help put this perspective, borrowers are carrying the highest level of non-mortgage debt in a decade.

This is a significant increase in student debt, but according to other industry reports, isn’t the worst thing to happen to the housing economy.

Just because there is more student debt, it doesn’t mean all borrowers are stunted by it. Mark Fleming, the chief economist for First American Financial Corporation, recently cited in a piece on the current low homeownership rate that more than 40% of student loan borrowers owe less than $10,000.

Fleming’s piece explained why homeownership hit an all-time low, crossing student debt of the list. He also mentioned a recent study by the Federal Reserve Bank of Cleveland that determined:

The monthly debt burden for borrowers between the ages of 20 and 30 in the second quarter of 2015 was $351 a month. The research also points out that three quarters of all 20- to 30-year-old borrowers have student loan payments of $400 or less. If the extra earnings per month that comes with having a college degree ($750) is higher than borrowers’ student loan payments, then they are materially better off. College is still worth it and, if you finish, you will be better able to pay a mortgage than if you had no debt and no degree.

Experts at Goldman Sachs went far enough to say that Millennials don’t even need to move out of the basement for its upbeat forecast on the market to come true.

The bank predicts that the economy will add 1.2 million new households per year over the next few years, which does not require young adults moving out of their parents’ homes.

Interestingly enough, Goldman Sachs asserted that the share of 25-34 year olds living with parents has risen a bit further and this trend now looks secular and more likely to be permanent at this stage. However, Goldman Sachs’ 1.2 million trend household formation forecast relies on other factors, especially continuing population growth and ageing.

Although even if student loan debt isn’t road blocking everyone, it is a definite barrier to some Millennials.

The National Association of Realtor recently released a survey with similar findings as NeighborWorks America, nothing that about 50% of Millennials, and about two-thirds of Millennial non-homeowners who have student debt, are uncomfortable taking on a mortgage. What’s more, this group was less likely to believe they could even qualify for a mortgage.

“It’s becoming very evident from this survey and our research released last month that the financial and emotional impact of repaying student debt is contributing to a delay in purchasing a home for many would-be buyers,” NAR Chief Economist Lawrence Yun said.

For those Millennials that say it is blocking them from buying a home, here are a couple links that could help: "5 common down payment misconceptions" and "How to get a mortgage right now, even with bad credit."