Mortgage interest rates are nearing all-time record lows and mortgage applications are up dramatically, all thanks to the Brexit, but it looks like those figures may not lead to a huge jump in actual mortgages being taken out, because it’s still getting harder to get a mortgage.

The wet blanket news for prospective homebuyers comes courtesy of a new report from the Mortgage Bankers Association, which showed that mortgage credit availability fell during the month of June.

That marks the fourth straight month that credit availability decreased.

According to the MBA’s report, its Mortgage Credit Availability Index fell by 1.3% to 119.8 in June.

According to the MBA’s report, of the four component indices, the Conventional MCAI saw the greatest tightening (down 2.4%) over the month. The Conforming MCAI was down 1.8%, while the Jumbo MCAI fell 0.9%, and the Government MCAI decreased 0.3%.

Tight credit isn’t holding prospective borrowers back from applying for a mortgage though, as both the MBA and Zillow both reported sharp increases in mortgage applications, especially refinance applications, in the wake of Britain’s decision to leave the European Union.

The MBA’s own mortgage application report showed that refinance applications rose to an 18-month high for the week ending July 1, while Zillow reported a 132% increase in refinance mortgage requests through its mortgage marketplace in the week right after the Brexit.

Whether the increase in applications actually leads to more mortgages is yet to be seen, but the data doesn’t look terribly promising.

Click the image below to see the trend in mortgage credit availability, courtesy of the MBA's report. 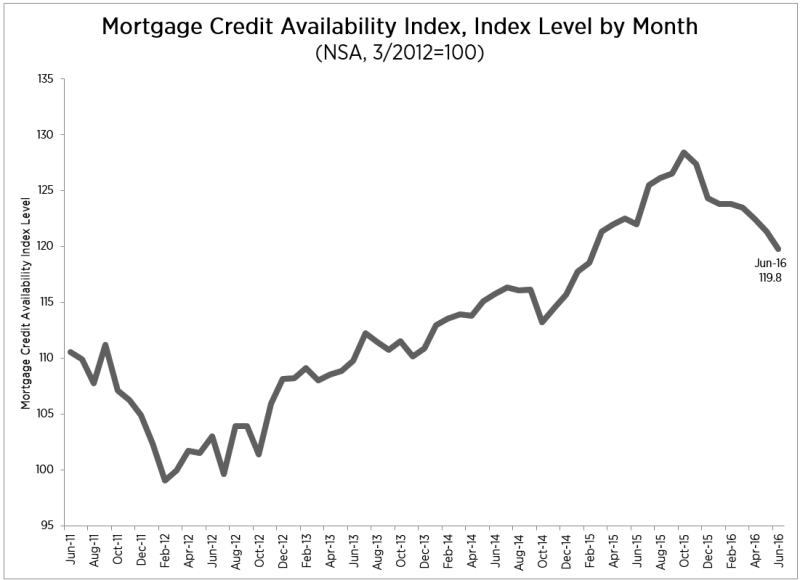