The spring housing market appears to be off to a good start as U.S. home prices continue to climb at a gradual rate after dropping unexpectedly in January, according to mortgage technology company FNC’s residential price index.

The index, which does not adjust for seasonality, recorded February home prices were up by 0.1%. On a year-over-year basis, prices continue to climb at a moderate pace, up 5.7% from a year ago. 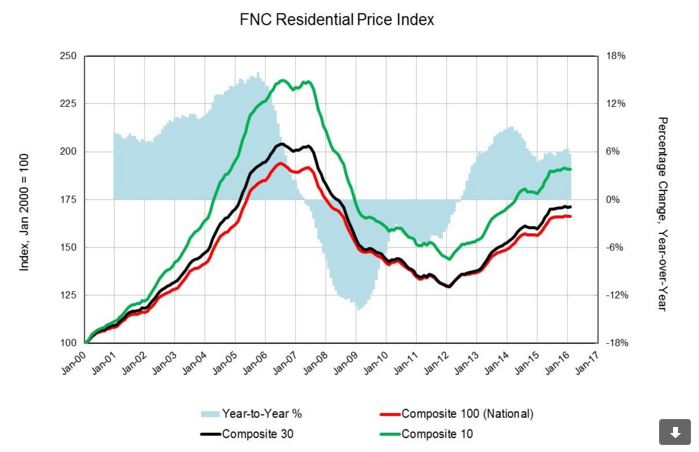 “Psychologically and economically, people prefer to buy homes when prices are rising than when they are falling, so a continued recovery of home prices is encouraging to both first-time and trade-up buyers,” stated Mayer.

The report states that as of February, foreclosed homes usually peak as banks tend to speed up disposal of REO and vacant homes in the winter. Properties rose up to 13.1%, a slight difference from 12.6% in January, but down from 14.5% a year ago.

Home prices were up in 16 markets led by Columbus and Tampa, Nashville, Houston and Miami.

Even though the west coast reported a severe inventory shortage, prices were down in San Diego, Los Angeles, and Sacramento. Prices did increase for San Francisco and Riverside, albeit only slightly.

While Nashville saw an annual growth rate at 9.9%, Boston however experienced one of the largest decelerations during the same period, down to 2.0% as of February 2016 from 10.4% a year ago. 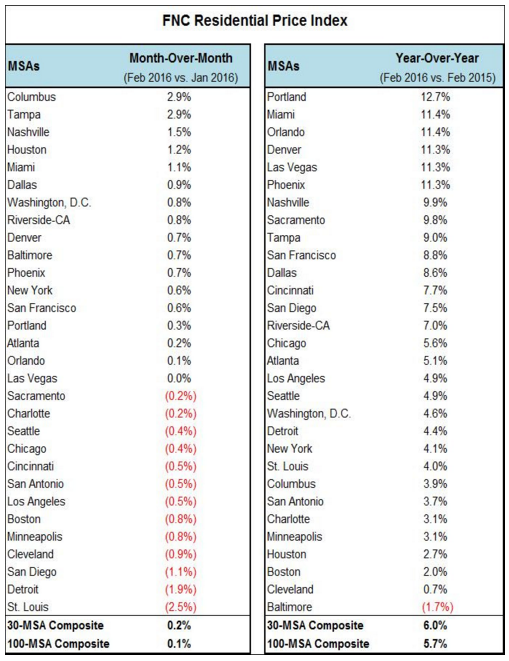