According to the recent Home Price Perception Index released by Quicken Loans, the average appraised values in March were 2.17% lower than what homeowners think their homes are valued.

The index revealed that the spread between the two values widened in March, compared to February’s appraisals which were 1.99% lower than what homeowners expected.

Appraised values remained higher in Western cities, while homeowner expectations in the Midwest showed appraisals at a much lower price than expected. 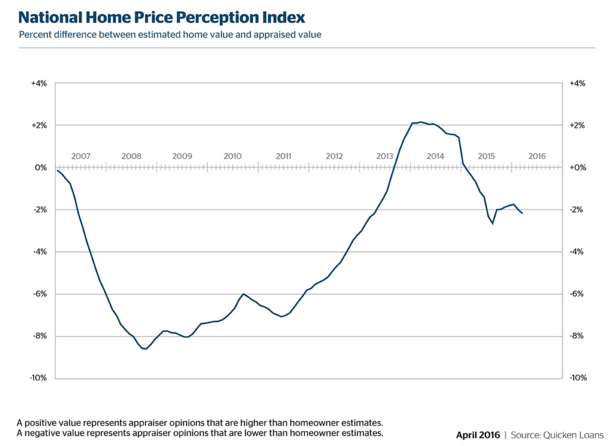 “The varying HPPI values across the country illustrates the importance of examining the market at the local level,” said Quicken Loans Chief Economist Bob Walters.

“If homeowners are eyeing that new home being built across town, they could be pleasantly surprised how much their home will sell for – or in some instances their equity may not take them as far as they think – depending on what area of the country they’re in,” added Walters.

San Jose, Denver, San Francisco, Dallas and Houston were the highest in appraiser value, while in Philadelphia, Baltimore, Chicago and Detroit values came in lower.

Per the home value index, home values rose 0.29% from February to March, and increased 4.77% compared to the previous March. While the West climbs to 1.52% in annual home value growth, the Midwest dips to 0.67%. 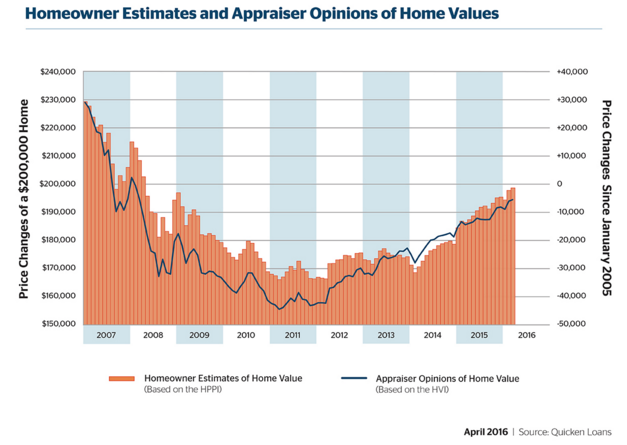 “It’s not always easy for homeowners to keep their finger on the pulse of their equity,” said Walters. “This data shows homes have continued to increase in value since the depths experienced after the last recession. Those increases mean far fewer Americans have negative equity in their homes. This increases their mobility and is a positive development for all segments of the housing market.”

Stacking the deck: Does choosing the right technology stack give your brokerage a competitive edge?

HousingWire spoke to three brokerages to learn about their tech stack, which products they consider indispensable and which have helped them streamline their operations and increase profitability.