The Federal Open Market Committee announced in its December meeting that it is officially raising the federal funds rate for the first time since June 2006.

In a statement released Wednesday by the Federal Reserve, the FOMC said that it will gradually raise the federal funds rate to a range of 0.25% to 0.50%.

“Given the economic outlook, and recognizing the time it takes for policy actions to affect future economic outcomes, the committee decided to raise the target range for the federal funds rate to 0.25% to 0.50%. The stance of monetary policy remains accommodative after this increase, thereby supporting further improvement in labor market conditions and a return to 2% inflation,” the FOMC said in a statement.

Moving forward, the FOMC said, “In determining the timing and size of future adjustments to the target range for the federal funds rate, the committee will assess realized and expected economic conditions relative to its objectives of maximum employment and 2% inflation.”

According to the economic projections of Federal Reserve Board members and Federal Reserve Bank presidents under their individual assessments of projected appropriate monetary policy, the federal funds rate is projected to grow from 0.4% in 2015 to 3.4% in 2018. 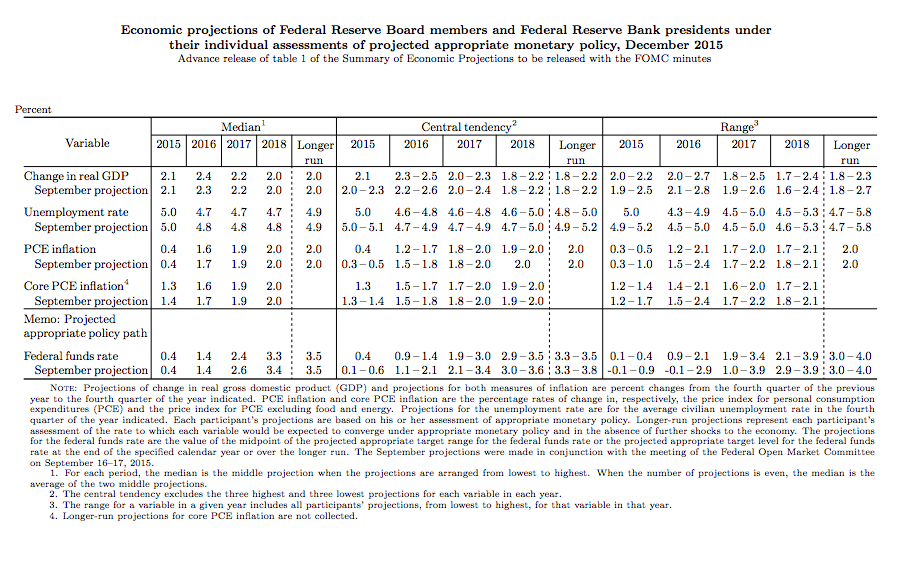 During the October meeting, the Federal Reserve said that it would not raise the federal funds rate at that time, citing the fact that the country’s economy still had not met the targets laid out by the FOMC.

However, since that meeting, Fed Chair Janet Yellen has said in a Congressional committee hearing on the U.S. economy that the current outlook and the flow of data since the central bank's last meeting in October are "consistent" with the rate hike criteria spelled out by U.S. policymakers.

And in November, in a speech before the House Financial Services Committee, Yellen formalized the possibility of a rate hike in December, telling the Committee that a rate increase in December was a “live possibility."