Servicers have denied an alarmingly high number of applications for the Home Affordable Mortgage Program, with only 30% of homeowners who applied for HAMP getting in, the latest quarterly report to congress by the Office of the Special Inspector General for the Troubled Asset Relief Program revealed.

This means that servicers turned down 70% of applications, proving that the program has struggled to draw in the number of homeowners envisioned by Treasury. 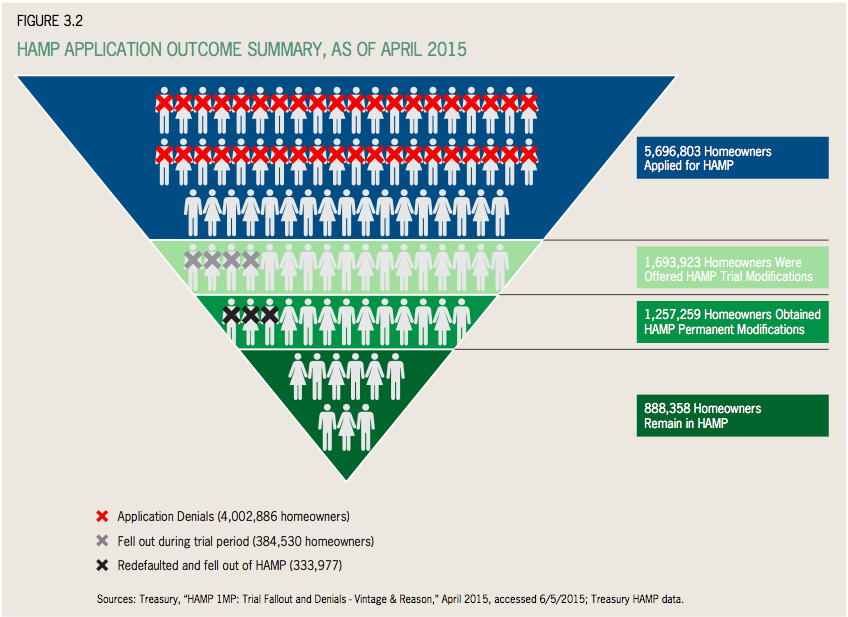 As of Dec. 1, 2009, Treasury began requiring servicers to report information on homeowners who submitted a HAMP application but were denied participation in the program. 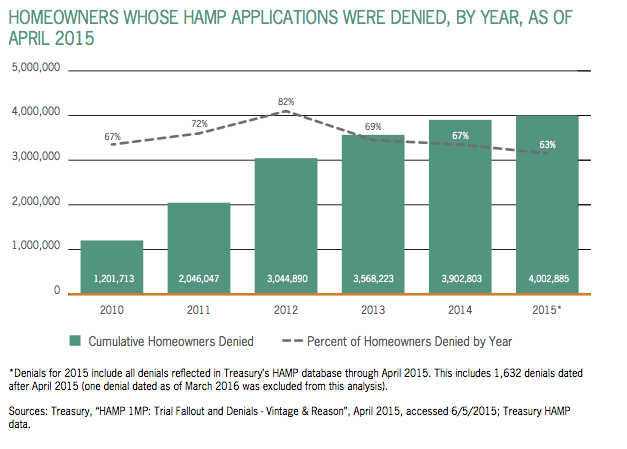 “According to Treasury’s data, 70% of homeowners who applied to lower their mortgage payment through HAMP have been denied assistance by their servicer—more than 80 percent denied by some of the largest servicers; that’s roughly four million homeowners, or, in fact, the number of families that Treasury initially estimated would be helped under HAMP,” Special Inspector General Christy Romero said.

“There is a massive lost opportunity for an emergency program designed to help homeowners through the crisis if only 20% to 30% of families seeking help from HAMP actually get into HAMP,” Romero added. 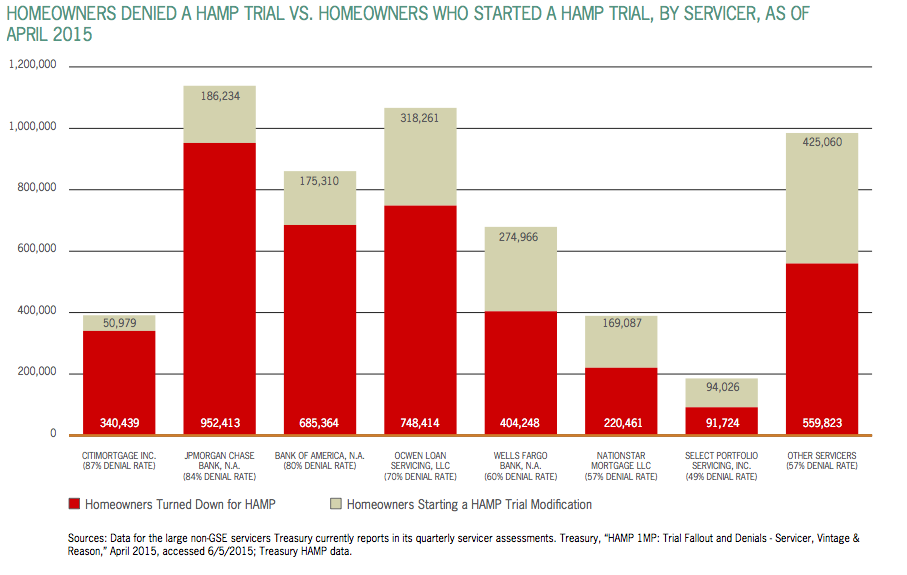 "The SIGTARP Report shows that Ocwen performs well relative to its peers with regard to HAMP denials, especially in light of the high number of distressed loans in our servicing portfolio. It is important to note that a significant number of borrowers who did not qualify for a HAMP modification did receive a proprietary modification from Ocwen. The HAMP program is an unprecedented taxpayer funded program and the standards are understandably high in order to ensure sustainable modifications. There have been a number of policy changes throughout the life of HAMP and adherence to the HAMP rules is one of our top priorities. In fact, in three of the last four quarters Ocwen has received the top performance rating and we continually strive to improve our metrics,” Ocwen said about the SIGTARP report.

The top reasons behind the denials included: 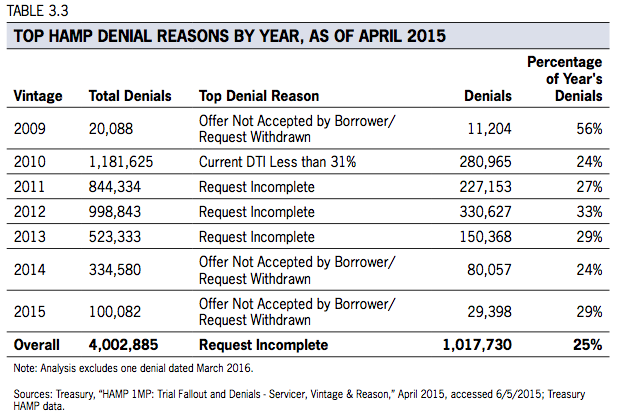 “Servicers reporting to Treasury attribute most denials to the same few categories, all of which relate to the fault of the homeowner or the homeowner falling outside of eligibility standards,” said Romero.

“Even if some people did not meet Treasury’s eligibility standards, SIGTARP has repeatedly pointed out, and Treasury has found in their reviews, known problems by the largest HAMP servicers that have plagued homeowners, for example, income calculation errors, lost paperwork, and improper denials.  Servicer reporting to Treasury that most HAMP denials related to the homeowner in light of known servicer misconduct raises concerns over the accuracy of servicer reports,” Romero continued.

When it comes to servicer issues, SIGTARP has reported on lengthy backlogs up to or even more than one year for some HAMP servicers.  Sometimes the homeowner turns in all required documentation, but the servicer loses it.

SIGTARP has also reported on problems with paperwork being delayed or lost when a servicer transfers the mortgage while the HAMP application is pending.

As a result of the fining, SIGTARP suggested Treasury can do the following to the help:

“Treasury closely monitors the number of HAMP denials and has made changes to the program to simplify documentation requirements and expand eligibility criteria to assist more homeowners.  In addition, Treasury has robust compliance procedures to test whether servicers are adhering to program requirements and we’ve publicly reported on these findings since 2011. In recent years, we have seen significant improvement in servicers’ compliance with program guidelines, including proper evaluation and denial decisions,” he continued.