Foreclosure activity, which includes default notices, scheduled auctions and bank repossessions, is on track to return to pre-crisis levels by the end of 2015, according to a new report from RealtyTrac.

RealtyTrac’s U.S. Foreclosure Market Report for February 2015 showed that there were foreclosure filings on 101,938 properties in the U.S. in February, which is a decrease of 4% from RealtyTrac’s revised January numbers and down 9%from a year ago to the lowest level since July 2006.

“Given that August 2006 was the peak of the housing bubble, this eight-and-a-half year low in foreclosure activity is a significant milestone and a sign that nationwide foreclosure activity is on track to return to historic norms this year — and is possibly even headed below historic norms given the skinny-jeans-tight lending standards over the past five years,” said Daren Blomquist, vice president at RealtyTrac.

According to RealtyTrac’s report, there were 48,079 properties that started the foreclosure process for the first time, which was down 5% from the revised January figures and down 7% from a year ago.

Click the image below to see some states where foreclosure activity is now below pre-crisis levels. 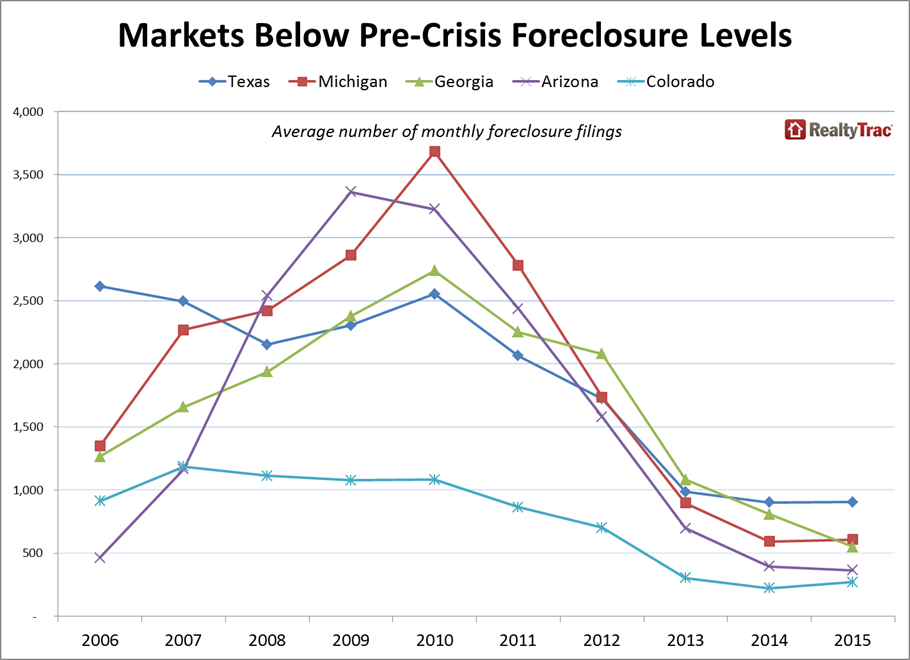 Nationally, there were 45,880 properties scheduled for a future foreclosure auction in February, down 13% from the revised January figures and down 4% from a year ago to the lowest level since July 2006.

February also marked the 27th straight month that REO inventory decreased on an annual basis. Nationally, lenders repossessed 24,305 properties via foreclosure in February, up 9% from the revised January total but down 20% from a year ago.

Maryland foreclosure activity decreased 1% compared to a year ago in February, but the state still posted the nation’s highest foreclosure rate: one in every 564 housing units with a foreclosure filing, according to RealtyTrac’s report.

Nevada foreclosure activity in February increased 12% from a year ago driven primarily by a spike in foreclosure starts, and the state’s foreclosure rate was second highest in the nation for the second month in a row. One in every 569 Nevada housing units had a foreclosure filing during the month.

Florida posted the nation’s third highest state foreclosure rate — one in every 570 housing units with a foreclosure filing — despite a 35% decrease in foreclosure activity from a year ago.