The spring homebuying season has typically been the ideal time for buyers to cash in on the increased demand for housing and get the most money for their home.

However, with the current low rate mortgage environment and increased home equity, this winter season seems to be an attractive time to sell.

Redfin examined 7 million homes listed from 2010 through 2014 to see how important is the season a home is in listed in.

The study look at how many of them went under contract within 30 days and how often they sold for more than their list price, two of the most common objectives a seller has when listing a home.

While spring did hold up as the best season to list a home, it was didn’t win by much.

“For the best chance of selling your home quickly and at a premium, your best bet is to list it in the spring: 39% of homes listed between March 21 and June 20 in the past five years went under contract within 30 days and 15% of them sold for more than list price,” the study found.

As for winter, 38%, just one percentage point less than spring, sold within 30 days, and 14% sold for more than list price.

Summer was next, with 36% of listings under contract within 30 days and 12% selling at a premium, leaving fall as the worst season to sell.

Thirty-four percent of homes listed in fall went under contract within 30 days and only 11% sold above list price.

“Just as buyer demand follows a seasonal pattern, so do home prices,” said Redfin Chief Economist Nela Richardson. “Over the past five years prices have increased by an average of 3% month over month in the spring and ticked down by about 1% each month during the fall. To get the best of both worlds, sellers need be informed on both local buyer demand and recent sale prices in their neighborhoods before deciding when to list their homes and for what price.”

However, the reported noted that there’s really not a huge advantage or disadvantage to listing in any season, as the numbers vary by just a few percentage points.

“The decision of when to list usually comes down to what’s best for the seller,” says Redfin agent Sam Khosh in Washington, D.C. “About half of the clients I’m working with at any given time are on a schedule dictated by a job relocation or their growing family, and not because they strategically chose a certain time of year based on expected demand.”

The data does change based on location. Here are two charts from Redfin that show how the data changed from place to place. 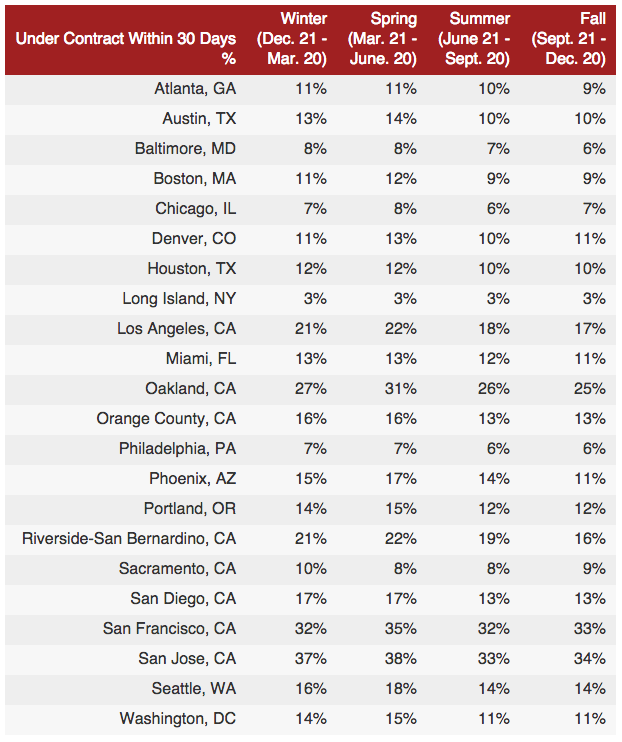 And this, second chart shows where homes are selling for more than the price listed. 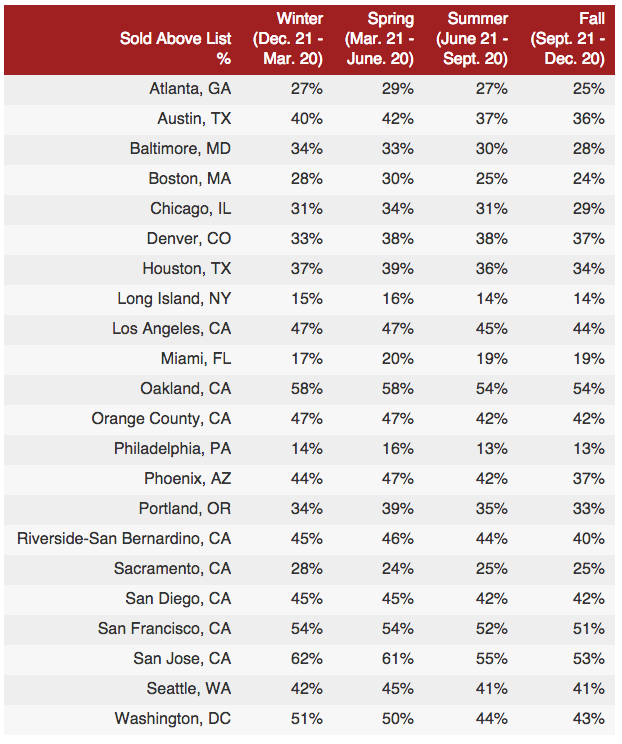 While on the other side, spring homebuying starts the latest in cooler weather markets like Seattle, Washington and Long Island, New York.