Lenders are quick to agree with Fannie Mae's Lender Sentiment Survey that the lending market is not only doing well, but should see a drastic growth as we enter into the spring home-buying season. 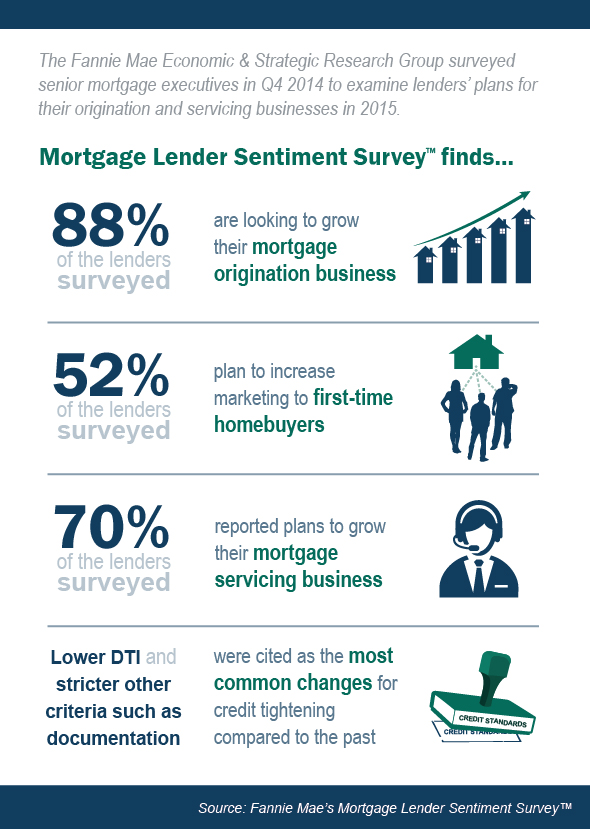 “In 2013, it was all about volume, and mortgages beefed up a lot through servicing and refinancing. In 2014, it was about purchases and which lenders would be in this long term. A lot of people did pretty well despite the doom and gloom going into 2014,” said Mat Ishbia, president and CEO at United Wholesale Mortgage.

“Now in 2015, the deck has cleared, and people have started to focus on how to grow their business. We expect this year to be our best year in terms of overall business and are really bullish on the market this year,” Ishbia continued.

On Monday, United announced the launch of its own loan origination system EASE, which will help drive that growth.

Chicago-based Guaranteed Rate firmly agreed with the Fannie survey, saying it plans on growing its origination and servicing businesses.

“The recent drop in rates has allowed our refinance origination to increase from 2014 levels, and our purchase business will continue to thrive as it did in 2014, when purchases made up the majority of our volume,” said Dan Gjeldum, senior vice president of mortgage lending with Guaranteed Rate.

"On top of this, Fannie’s 3% down program will help improve the first-time buyer’s ability to quality and obtain a mortgage than in years past,” Gjeldum said.

Some lenders, like United Fidelity Funding Corp., changed their business in 2014 to reflect the changes and growth coming.

“We are expecting a lot of growth this year,” said John Bell, principal of United Fidelity Funding Corp. Bell said they are excited for the extra demand from the FHA lowering the premiums and helping the first-time homebuyer.

In looking at the past couple of Mortgage Banker Association weekly mortgage application reports, the share of refinance applications surged, hitting the highest level since July 2013, showing added demand.