“The pool is on average four months seasoned, with a maximum age of nine months,” DBRS said in its report. “The payment histories on the loans are substantially clean. Except for 22 loans that had previous servicing transfer-related payment disruptions, no loan has had prior delinquencies since origination.”

According to DBRS’ report, 100% of the loans are fixed-rate, first-lien mortgages and none of the loans carry interest-only features. A composition like that poses the lowest default risk, given the stability in monthly payments, DBRS said.

The underlying borrowers also have substantial cash reserves and significant annual income. “For the entire pool, the WA primary borrower income exceeds $268,000 annually,” DBRS said. “For the entire pool, the WA liquid reserves for the loans are approximately $348,000, which is enough to cover over seven years of monthly mortgage payments. On average, 8.3% of the loans have liquid reserves higher than their current loan balance.”

Also of note in the deal is that approximately 45.2% of the borrowers have more than one mortgaged property.

Additionally, the CSMC Trust 2015-WIN1 has a “relatively moderate” geographic composition, DBRS said. California represents nearly 50% (49.4%) of the underlying loans, and the top three states represent 59.4%, with Florida ranking second with 5.7% and Massachusetts ranking third with 4.3%.

The originators for the mortgage pool are New Penn Financial (20.2%), Quicken Loans (19.3%), Caliber Home Loans (7.6%) and various other originators, each comprising less than 5%.

Click the image below to see DBRS’ presale ratings for the offering’s classes. 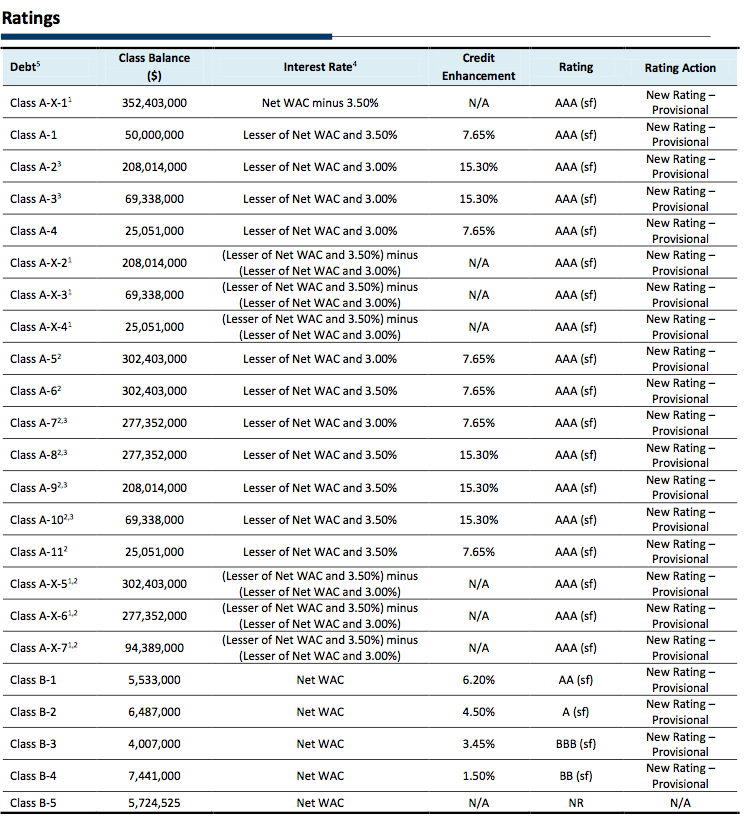 Refi Sugar High: How to balance your lending diet

The industry experts at TMS have compiled a list of proactive steps to take to ensure that your business will be prepared when the refi sugar high ends.