Not everyone in the industry is on board with the Federal Housing Finance Agency’s recent move to encourage lenders to issue mortgages with down payments as low as 3% due to concerns that it would lead to more defaults.

But based on a review of the performance of low-down-payments of Fannie Mae and Freddie Mac mortgages in recent years, the Urban Institute argues that these fears are not well founded.

"Now we can safely and responsibility do these loans…we reduced the layering of risk," Mayopoulos said at the time.

However, the GSEs purchased similar loans before.

Prior to late 2013, Fannie guaranteed loans with down payments between 3% and 5%.

By looking at these past loans, Urban Institute is able to better gauge how likely it is that borrowers with similar loans will default going forward. 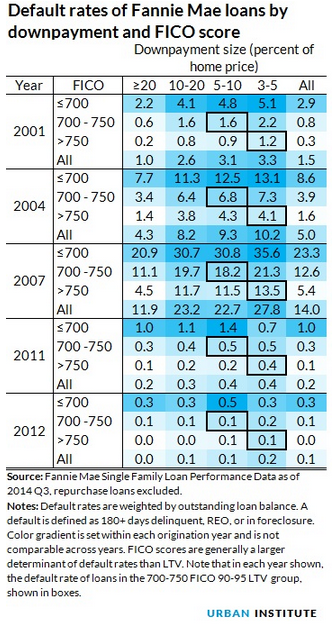 “Of loans that originated in 2011 with a down payment between 3-5%, only 0.4% of borrowers have defaulted. For loans with slightly larger down payments—between 5-10 percent—the default rate was exactly the same,” the Urban Institute said.  “The story is similar for loans made in 2012, with 0.2% in the 3-5% down-payment group defaulting, versus 0.1% of loans in the 5-10% down-payment group.”

Instead, default rates are more likely to hinge on a borrower’s credit history.

“Those who have criticized low-down payment lending as excessively risky should know that if the past is a guide, only a narrow group of borrowers will receive these loans, and the overall impact on default rates is likely to be negligible,” the Urban Institute said in its report. “If executed carefully, this constitutes a small step forward in opening the credit box.”