As we close out 2022, it’s time to reflect on a historic year for the housing market, which was even crazier than the COVID-19 year of 2020. There are similarities and significant differences between the housing recession we’ve seen this year versus 2008, and looking at specific factors in both timeframes gives us an idea of what to expect in 2023.

First, we must define what we mean by recession. Our general economy is not yet in a recession, but housing has been in one since the summer. For me, it’s straightforward: it’s when we see these four things happen in any sector of our economy:

1. Sales fall. Housing demand has fallen noticeably this year.
2. Production falls. Housing permits and starts are falling now, even with the backlog of homes in the system.
3. Jobs are being lost. The housing sector — especially real estate and mortgage — has seen significant layoffs, while the general economy will create more than 4 million jobs in 2022.
4. Incomes go down. With less transaction volume, general incomes in the housing sector are falling.

A few months ago, I was asked to go on CNBC and talk about why I call this a housing recession and why this year reminds me a lot of 2018, but much worse on the four items above.

It is crazy to think we are seeing these four things happen in the housing market considering that even in March of this year we were seeing bidding wars accelerate before mortgage rates rose. That is how fast things changed — a by-product of a sector where the prices of homes were getting out of control after 2020.

Then we had the biggest mortgage rate shock in recent history and yet even with that, we will have over 5 million total home sales this year. Sometimes this discussion gets off the rails because people tell me home prices are up in 2022 so housing can’t be in a recession.

That is precisely the wrong way to look at housing economics: higher home prices have nothing to do with housing being in a recession, as I showed above. Housing went into recession in 2006 and prices weren’t collapsing that year either.

Let’s look at the recessionary factors we see now versus 2008.

However, what isn’t identical is that we have not had a massive sales boom like we saw from 2002-2005. We only had one year of growth in the purchase application data from 2020-2021. The COVID-19 pause and rebound meant that the end of the year in 2020 was artificially high, so I can make the case that we had decent two years of growth, but that’s all. This is significantly different than the period from 2002-2005 when credit expansion was booming. 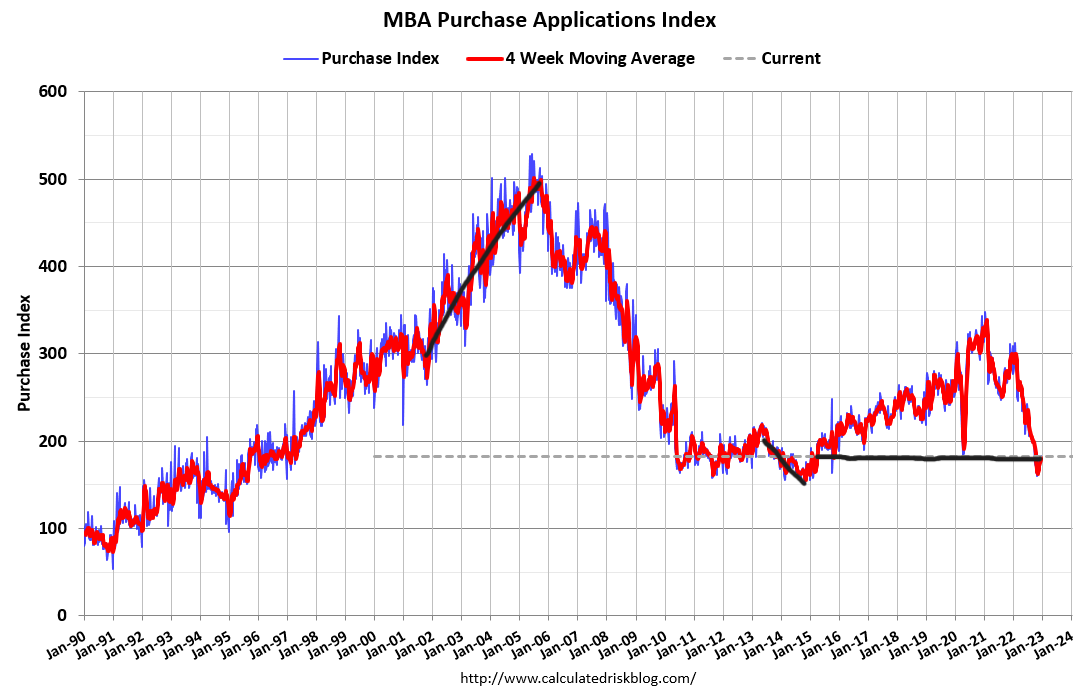 Existing home sales has seen a waterfall dive in demand, but this has happened in less than a year. During the housing bubble years, home sales peaked in 2005 and it took two years to get back to the sales levels we are trending at today. As we can see below, we had times in the previous expansion when rates rose and sales trends headed to under 5 million. Now, with one more report left in the year, we might break under 4 million. 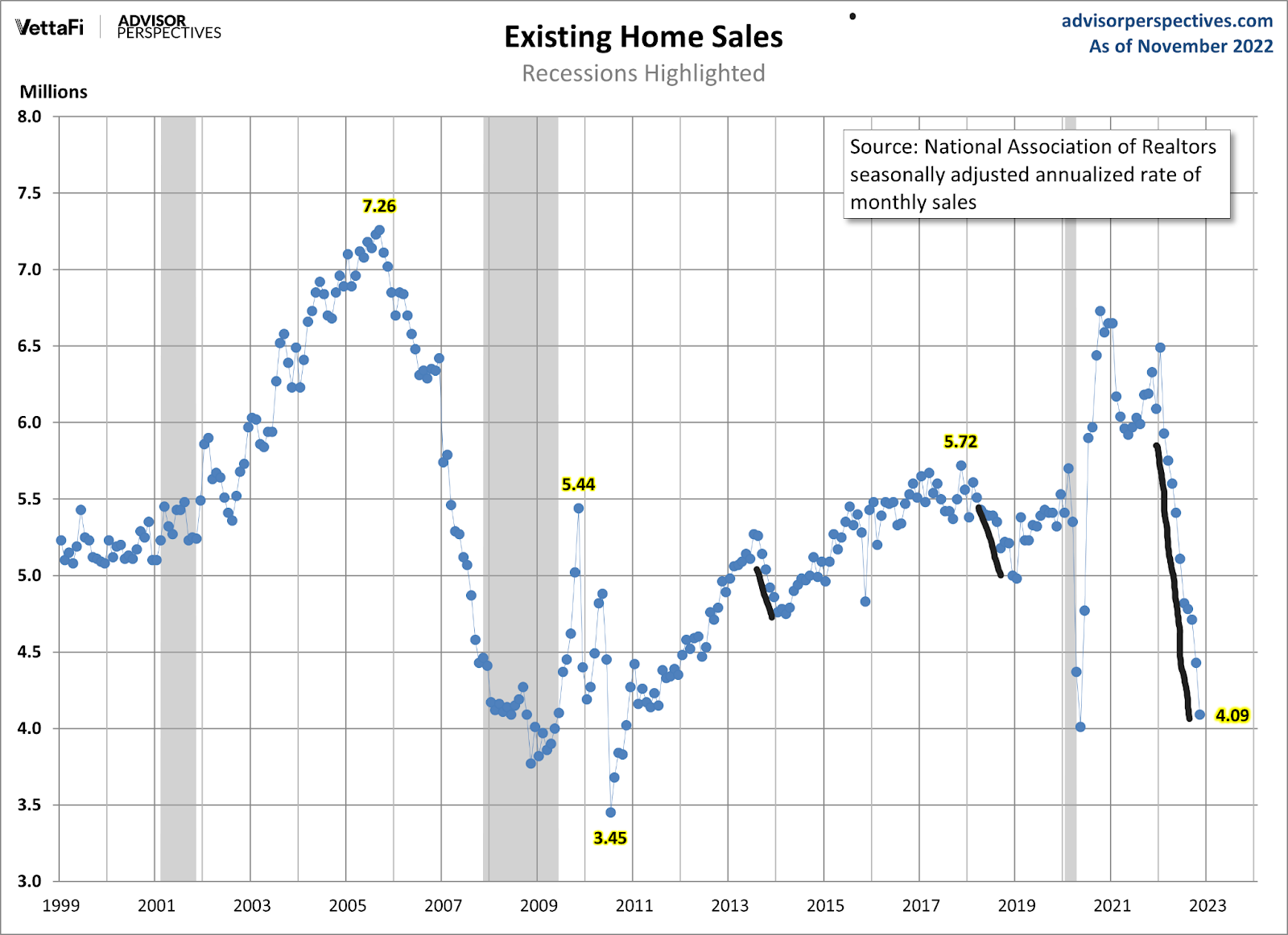 Outside of COVID-19, we have yet to see pending home sales hit levels that low level this century. Part of the issue is that mortgage rates moved up so fast that many sellers quit this year as well. 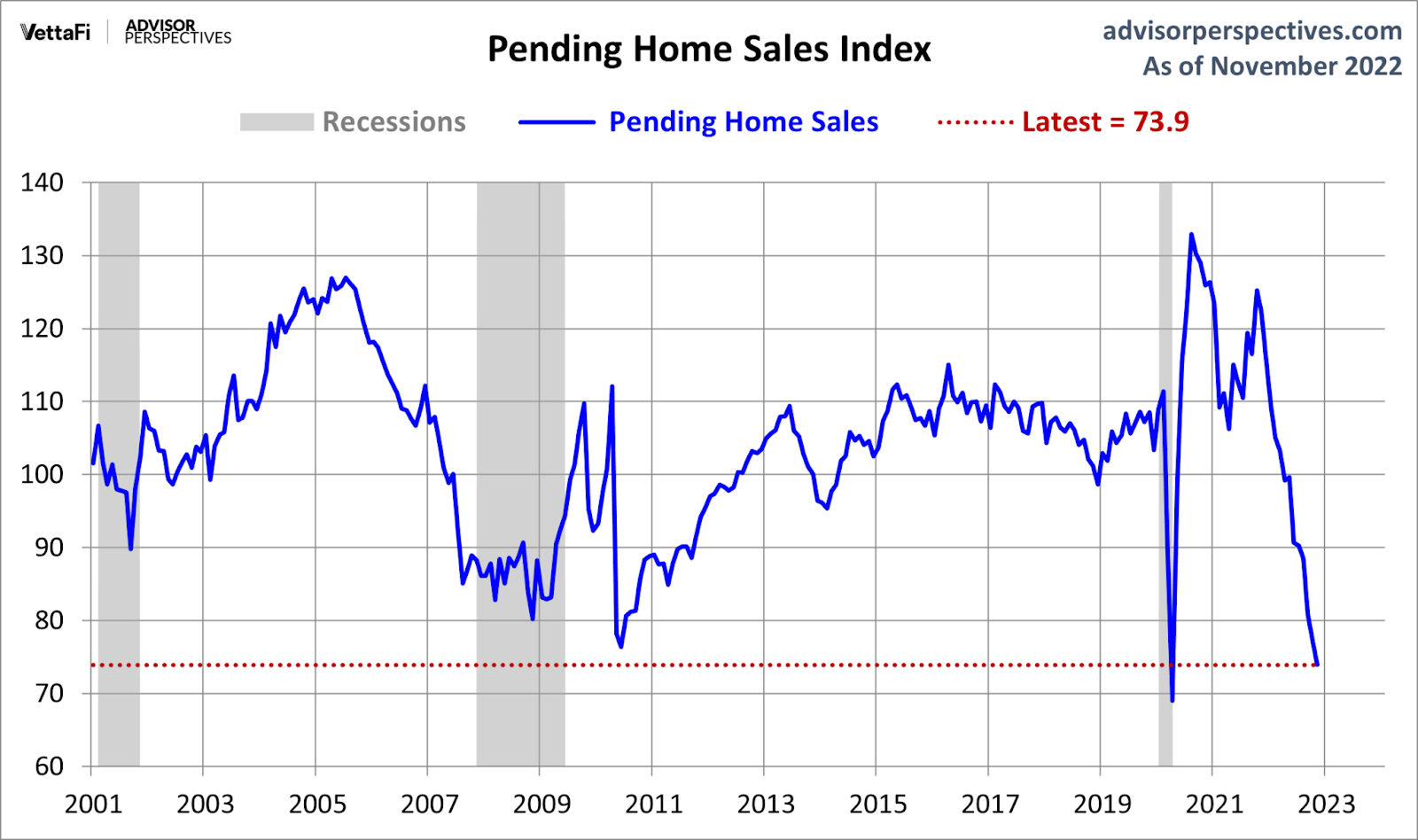 Key thing to remember: A traditional seller is also usually a buyer . This common-sense reality has been lost in the discussion of housing market economics for a long time because people kept pushing the false narrative of supply spikes — which means people would sell their homes to be homeless. In fact, when traditional primary resident homeowners list their homes, they typically buy another home.

When mortgage rates spiked up as much as they did this year, it wasn’t financially appealing to some sellers to purchase their homes at rates of 6.25%-7.37%. This has led to many people not listing their homes to sell and facilitated a more considerable decline in home sales than we would traditionally see. This now goes into a subject matter that is a striking difference between 2022 versus 2008: Inventory and Credit.

This aspect of the housing market is where we see the biggest divergence between 2008 and today. Total housing inventory today — using the NAR data — stands at 1.14 million. We have a good probability over the next two existing home sales reports to break under 1 million total active listings, which would mean that we will start 2023 with the secon-lowest level listings ever in history.

As I have explained, this started in the year 2000, when total active listings grew from 2 million to 2.5 million in 2005. Except we had many years of a credit sales boom on debt structures that weren’t sustainable. So, when housing peaked in 2005, we had a flood of inventory from home sellers who couldn’t buy a home, and that flood allowed the list to spike to over 4 million in 2007.

As you can see below, today — a few days away from 2023 —with existing home sales trending at 2007 sales levels, it is strikingly different.

The housing economy is built on housing construction, and the recession that started in June meant housing permits were going to fall, which they have. The issue is that when housing was in a recession in 2007, we had a massive spike in supply. That isn’t the case now and housing permits have legs to keep going lower as long as mortgage rates stay high.

One saving grace is right now is that the builders still have a massive backlog of homes to build, especially two-unit rental units that amount to nearly 1 million added supply coming online next year. This is a big plus in fighting inflation.

The good news for 2023 is that we still have supply coming, and we all should be rooting for housing completion data to improve next year. As you can see from the chart below of housing completion data, sales are falling, but completions have gone nowhere for some time now. This is because we didn’t have the credit sales boom from 2020-2022 that we saw from 2002-2005.

The most significant difference between the recession today and 2008 is housing credit. In 2008, the rise of foreclosures and bankruptcy were waving red flags before the job-loss recession even happened. Today, it’s the complete opposite story: the 2005 bankruptcy reform laws and the 2010 Qualified Mortgage laws laid the foundation for the best housing credit profiles recorded in U.S. history.

From 2005 to 2008, we saw a rise in foreclosures, all before the job-loss recession happened. That isn’t what residential housing credit risk is supposed to look like. 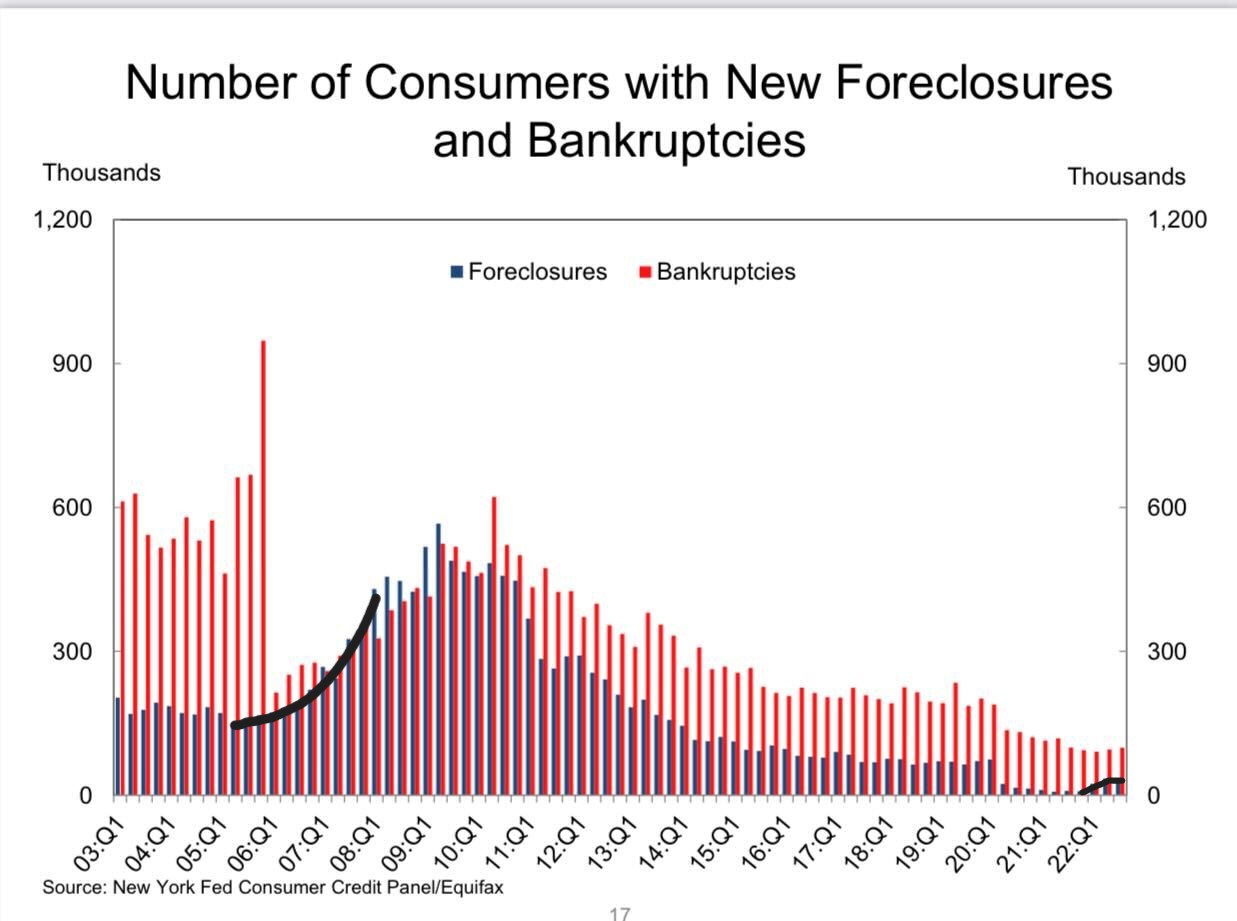 We now have real credit risk, as prices are falling from the peak in some areas; late-cycle lending risk is always traditional. People who buy homes late in an expansion and lose their jobs with no selling equity will likely lead to a foreclosure, most likely those with FHA loans. This means that the scale of defaults when the next job-loss recession happens will be small compared to 2008.

A foreclosure takes a lot of time, traditionally nine to 12 months. As we can see, once the recession started in 2008, the 90 days late + foreclosure data line took off. However, this all actually began in 2005 with the rise of new foreclosure and bankruptcy data heading toward the recession of 2008. 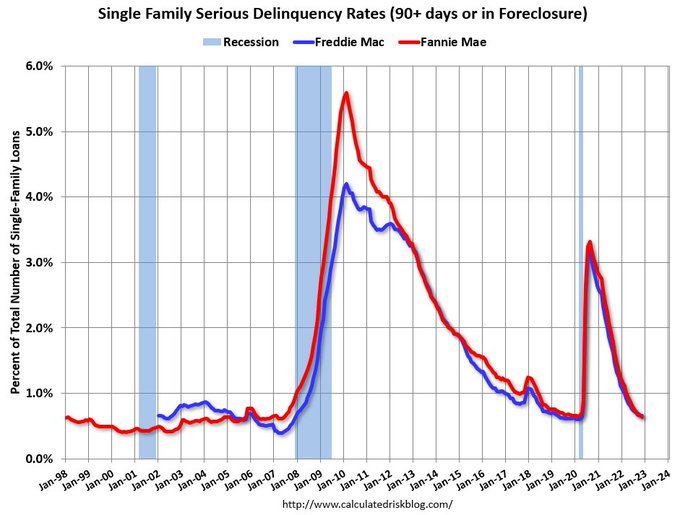 The housing reforms made housing credit boring again, and boring is sexy! Housing is the cost of the shelter to your capacity to own the debt. So, someone buys a home, their debt payment is fixed, and their wages rise every year, making their cost of shelter go down while their income grows. This has created one of the most impressive data lines for homeowners.

Mortgage debt service payments as a percent of disposable personal income have collapsed as people stayed in their homes longer and longer. With three refinancing waves since 2010, their housing debt cost versus their total wages fell. As you can see below, there is a massive difference at the end of 2022 versus 2008.

FICO score trends have been steady for 12 years. Now, we have seen people speculate that the recent rise in FICO scores for owners is credit score inflation, but the trends have stayed the same for a long time. It’s just the fact that, as a country, we originated a lot more loans during COVID-19 due to the massive wave of refinancing. People assume that was credit score inflation but in reality, the trend stayed the same.

As you can see in the chart below, the credit quality is much better now and we have no more exotic loan debt structures in the system post-2010. 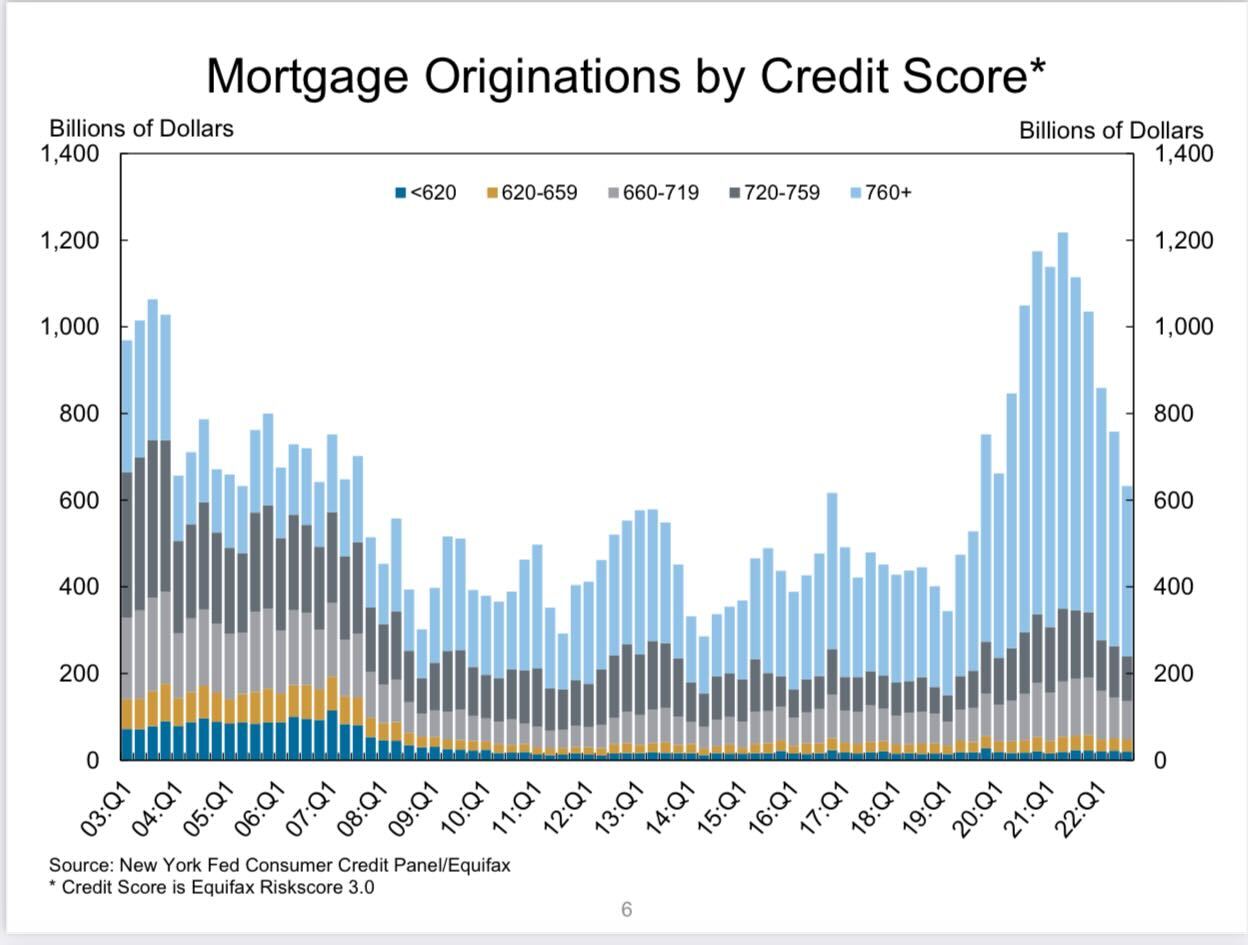 On top of homeowners’ credit looking excellent, we have a lot of nested equity, and over 40% of homes in America don’t have a mortgage. So, on the credit and debt side of the equation, the housing market looks a lot different in this recession.

Housing debt adjusting to inflation isn’t even above the housing bubble peak. This is a by-product of having the weakest housing recovery in the previous expansion. I wrote about this before we got into the critical timeframe of 2020-2024, and we weren’t in a housing bubble in 2019 as so many people claimed.

What I’ve showed here can explain why some data look the same, and some look very different. This time around we have taken a much more aggressive hit in existing home sales in a faster amount of time. We didn’t see similar inventory spikes as we did from 2005 to 2008, nor has the housing credit market crashed.

However, we are in the early stages of housing permits getting hit, and many housing jobs were lost in 2022 due to the decline in demand for homes. The question now is, what about 2023?

Next week I will be providing my 2023 forecast, which will be written in a way I have never done before because the chaos in today’s housing market data is truly savagely unhealthy, while some of the core foundations of housing are very well intact. Happy New Year’s!