In fact, new data from the New York Fed shows that the mortgage business rebounded big-time in the second quarter of 2019, with originations rising to their highest level since the third quarter of 2017.

According to New York Fed data, mortgage originations, which include mortgage refinances, increased by $130 billion over last quarter’s total of $344 billion to $474 billion, the highest volume seen since the third quarter of 2017.

The common denominator between the second quarter of this year and the third quarter of 2017: interest rates below 4%.

According to data from Freddie Mac, the second half of 2017 was the last time mortgage rates were as comfortably below 4% as they were in the second quarter of this year.

As shown in the chart below, mortgage rates were well below 4% during the third and fourth quarter of 2017, before climbing back above 4% for all of 2018, peaking at nearly 5% in November 2018. 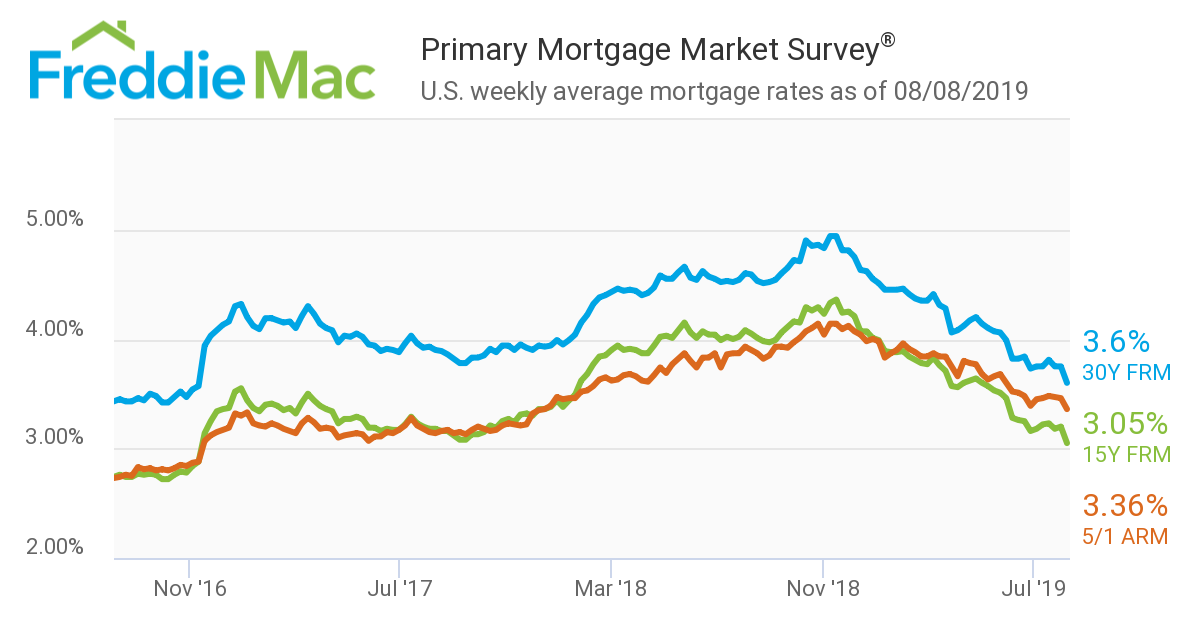 Since then, mortgage rates have dropped significantly, falling well back below 4% during the second quarter and continuing to fall in recent weeks to levels not seen since 2016.

The significant rise in mortgage originations in the second quarter also reverses the recent trend of subpar performances for the mortgage business.

Mortgage originations, which the Fed measures as appearances of new mortgage balances on consumer credit reports and includes refinanced mortgages, came in at $445 billion in the third quarter of last year.

Then, originations fell to $401 billion in the fourth quarter. They fell again in the first quarter to $344 billion, before bouncing back in the second quarter all the way to $474 billion.

According to the Fed report, mortgage underwriting “remained tight” in the second quarter, with only 10% of mortgages being originated to borrowers with credit scores under 651. The report showed that the median originating score of 759 was unchanged from the previous quarter.

With the rise in mortgage originations, overall mortgage debt rose to highest level since the third quarter of 2008.

According to the New York Fed report, mortgage balances, which are the largest component of household debt, increased by $162 billion in the second quarter to $9.4 trillion, surpassing the high of $9.3 trillion in the third quarter of 2008.

And as mortgage debt increased, so did the overall debt load for U.S. households.

The Fed’s report, which is pulled from a nationally representative sample of individual- and household-level debt and credit records drawn from anonymized Equifax credit data, shows that the total household debt increased by $192 billion to $13.86 trillion in the second quarter of 2019.

The second quarter of 2019 was the 20th consecutive quarter with an increase in overall debt, and the total is now $1.2 trillion higher, in nominal terms, than the previous peak of $12.68 trillion in the third quarter of 2008, the Fed said in its report. 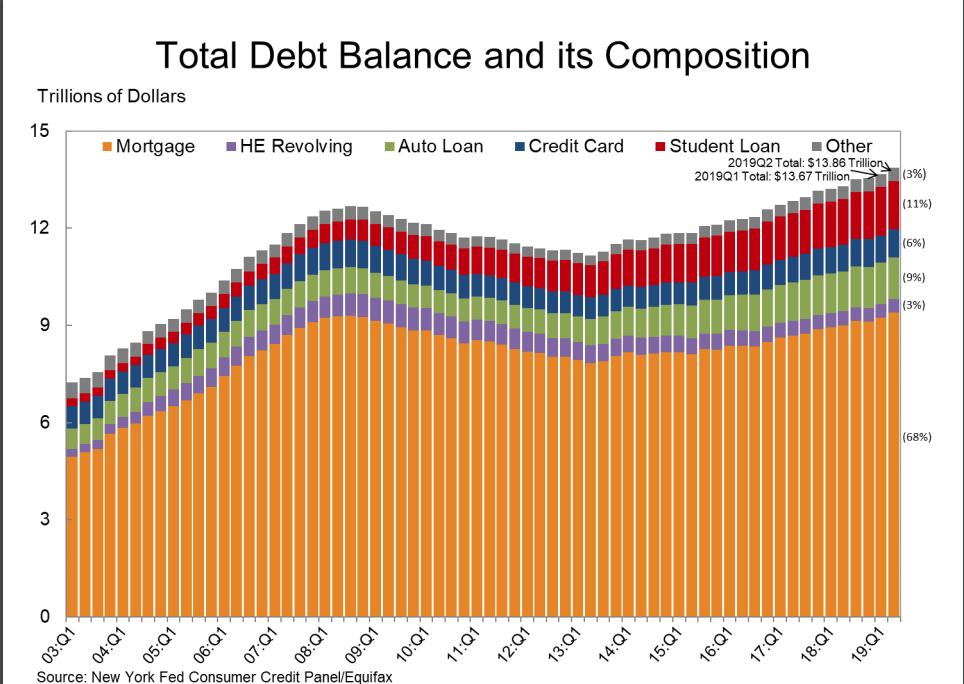 (Click to enlarge. Image courtesy of the New York Fed)

Despite mortgage debt being on the rise, there doesn’t appear to be any trouble brewing in mortgage performance, as the Fed report shows that mortgage delinquencies continue to improve, with 0.9% of mortgage balances showing as 90 or more days delinquent, down from 1% in the previous quarter.

The same is not true for other forms of debt though, notably credit card debt.

“While nominal mortgage balances are now slightly above the previous peak seen in the third quarter of 2008, mortgage delinquencies and the average credit profile of mortgage borrowers have continued to improve,” said Wilbert van der Klaauw, senior vice president at the New York Fed. “The data suggest a more nuanced picture for other forms of household debt, with credit card delinquency rates continuing to rise.”