The Federal Reserve Bank of New York described U.S. home sales as “soft,” “anemic,” and “lackluster” in a Monday report.

The report pointed to June’s existing home sales level, which was 1.7% below a year ago, as part of the reason for its conclusion: “Home sales remain lackluster.”

Still, all is not lost.

“Favorable labor market conditions and a substantial decline in mortgage interest rates continue to act as positive forces,” the report said. “Inadequate inventories in affordable price ranges continue to be a drag on sales and to fuel home price increases.”

The report noted the sluggish pace of home building. While there was some improvement in June, single-family housing starts over the past 12 months were flat with the year-earlier period, the economists said.

“With mortgage interest rates now down roughly 100 basis points since the beginning of the year, we expect to see some improvement in single-family starts in the months ahead,” the report said.

Other economic indicators were more positive: Inflation remains below the Fed’s target, the jobs market has been strong, consumer spending rose in the second quarter, and bank stocks performed in line with the broader market.

Overall, the implied path of the Federal funds rate is downward, the report said. That’s Fed-speak for saying: The Fed’s benchmark rate likely will be cut again this year.

The Fed reduced its benchmark rate by a quarter percentage point last month in a bid to keep the longest economic expansion in U.S. history from petering out. It was the first reduction since the financial crisis more than a decade ago. 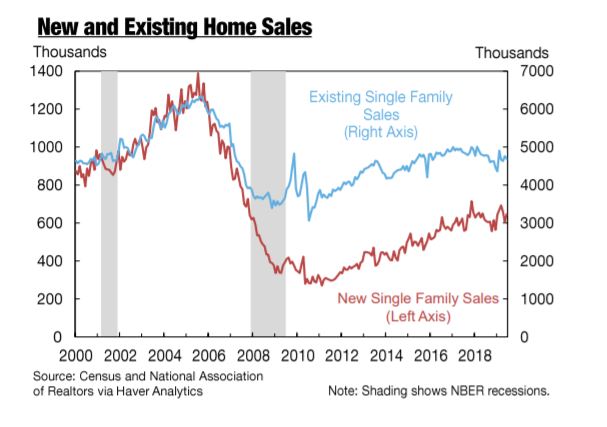