Why is now the time for lenders to modernize their appraisal processes
Two HW Annual sessions that can help you navigate a recession
Fraud, risk, quality, oh my: The hazards to watch for in gaining purchase market share
Courtney Thompson: managing servicing through difficult market cycles

Although rent prices rose in April, RentCafé indicates two-thirds of America’s cities are renting for less than the national average.

According to the company’s Apartment Market Report, the national average rent in April totaled $1,436. Not only is this a 3% increase from the previous month, but it is also $42 higher than the same period in 2018.

Notably, RentCafé’s data shows that 36% of the country’s largest 253 cities now have rents that exceed the national average. However, a staggering 64% of rents still fall below this average.

So, where are these decreases mainly happening? Well, according to RentCafe’s data, rents are predominately falling in the South and Midwest.

This is particularly so for small cities in Texas, which continue to boast the smallest average rents nationwide.

On the other end of the spectrum, the company reports that California takes the lead as the most expensive rental mart — once again.

“A thriving business climate, good weather, and proximity to top-tier educational institutions are just some of the reasons for the Golden State’s unceasing popularity,” RentCafé writes. “Rent in Oakland, CA reached $2,812, followed by the $2,008 average in Long Beach, CA, the second-highest among mid-sized U.S. cities.”

The image below shows annual rent changes in small cities across the country: 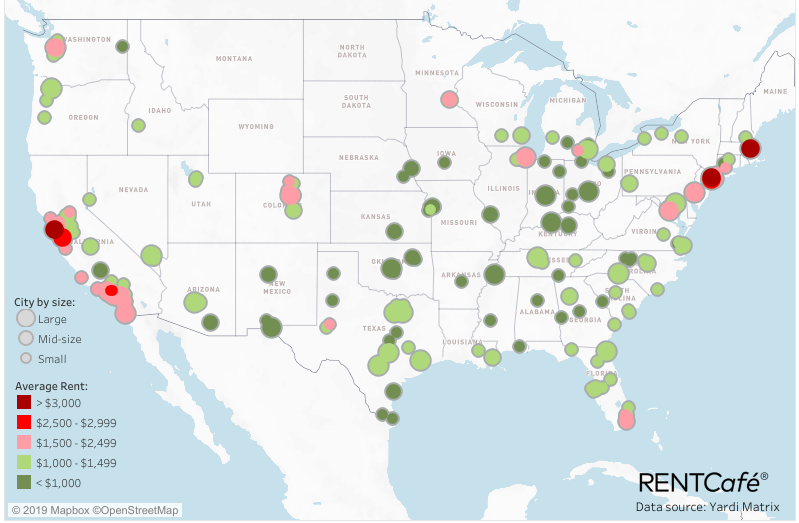 Ginnie Mae is not budging on its proposal to put a 250% risk weight on gross mortgage servicing rights for nonbanks.