The housing market is tipping in favor of buyers, with a significant percentage of homes on the market selling for less than their original listing price.

This is according to real estate startup Knock, which reveals which markets have the highest percentage of homes that will sell below asking in its second quarter Deals Forecast.

Homebuyers are increasingly likely to score a deal, Knock says, forecasting that 75% of current listings will sell below their original listing price in Q2, and pinpointing the average number of days on the market as 25 and the average price reduction at 3.3% below asking.

The best deals, it reveals, can be found in the South.

Among the top 10 cities that had the greatest percentage of houses sell for less than asking, seven were located in the South.

Florida took the lead, with four cities in the sunshine state making the list, including Miami, which nabbed the No. 1 spot for both the size and the frequency of price reductions.

Here is a chart from Knock predicting the cities that will see the greatest percentage of price reductions in Q2: 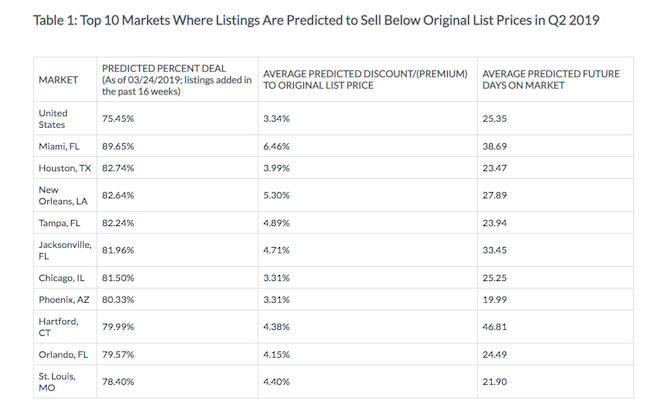