Despite recent technological advancements in the mortgage industry, servicers continue to fall behind in an already lagging industry.

The latest survey from J.D. Power shows Americans are not impressed. Mortgage servicer satisfaction remained flat from last year and even the year before, according to J.D. Power’s 2018 Primary Mortgage Servicer Satisfaction Study.

“The mortgage industry has made bold investments in new technology but servicing still has a long way to go,” said Craig Martin, J.D. Power senior director of mortgage practice. “With only 20% of mortgage customers utilizing mobile technology, which is 2% below 2016, availability and adoption of these services has been slow in coming. Customer expectations are increasing, often influenced by their day-to-day experiences, but servicing is not keeping up.”

“Servicers not only have to decipher the services that provide the most value to existing and new customers, but they also must solve how best to engage customers,” Martin said. “Doing so will translate into higher levels of adoption and usage to deliver cost savings and improved experience. There is a lot of room for improvement.”

SunTrust moved up several spots from its ranking of 10 last year, up to fifth in 2018. Unsurprisingly, this year the bank upped its technology department with its new digital mortgage platform.

Regions Mortgage, while still in the top five, actually fell from its ranking of second last year. It has, however, continued to invest in its mortgage tech platform, and announced earlier this year its new investment in Lender Price, a fintech mortgage and consumer digital lending technology platform provider.

Huntington held its No. 3 position from last year, but increased its score from 795 in 2017. Huntington was also recognized this year for its excellence in working with small and middle-market businesses, showing its dedication to reaching optimal consumer satisfaction.

This bank rose significantly from its position as No. 14 in 2017. This ranking is much closer to its place as fourth back in 2016, when the bank scored 808. However, despite its comeback to the No. 2 spot, it could not overtake the veteran No. 1 best mortgage servicer.

To absolutely no one’s surprise, and for the fifth year in a row, Quicken Loans took the spot as best servicer. The company advertises its product, Rocket Mortgage, emphasizing the ease with which consumers can walk through and understand the mortgage process. 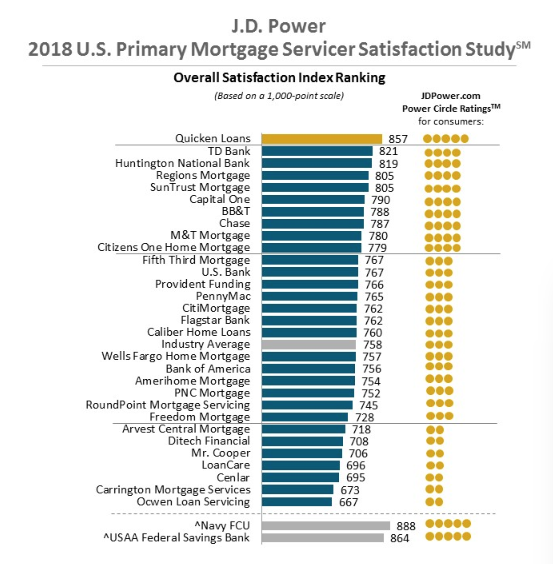 Is it worth it for lenders to reopen physical offices?

What are the mortgage industry’s plans when it comes to re-entry? Many in the industry believe that increased digitization of the industry lends itself well to remote work.