Are cities finally fed up with Airbnb’s decimation of local housing? It’s starting to appear that way, as two major cities have voted to limit or restrict short-term rentals, becoming the latest metros to do so.

Last Wednesday, the New York City Council voted unanimously to significantly restrict Airbnb and other online home rental services. The council passed a bill that seeks to prevent landlords and tenants from illegally renting out apartments for a few days at a time to tourists, a trend that the city says has aggravated the housing crisis by making short-term rentals more profitable than long-term leases.

According to a New York Times article, Airbnb and other home rental services, like HomeAway, would be required to provide the addresses and names of hosts to the city’s Office of Special Enforcement each month, and to specify whether rentals are for a whole apartment or just a room.

New York City is Airbnb’s largest domestic market, but under state law, it is illegal in most buildings for an apartment to be rented out for less than 30 days unless the permanent tenant is residing in the apartment at the same time. The new disclosure requirements would make it much easier for the city to enforce the state law and could lead to many of the 50,000 units rented through Airbnb in the city coming off the market. After similar rules went into effect in San Francisco, listings fell by half.

“The vacancy rate in New York City is very low,” the Council speaker, Corey Johnson, said before the vote. “We’re in an affordable housing crisis. We’re in a homelessness crisis. And Airbnb will not give us this data.”

According to the NYT’s reporting, home rental companies will face fines of up to $1,500 for each listing they fail to disclose, down from the $25,000 originally proposed.

A New York City Hall spokeswoman told the paper that the new restrictions have the support of Mayor Bill de Blasio, who has prioritized affordable housing in the city, and he is expected to sign the bill into law.

On the other side of the country, in San Diego, the city council recently voted to outlaw vacation rentals in secondary homes, restricting Airbnb and other short-term rentals to primary residences only.

An article from the San Diego Union-Tribune explains that the action will curtail investor activity in the short-term rental market while also barring residents and out-of-towners from hosting short-term stays in multiple properties other than their residences.

One exception was made for San Diegans who have additional units on the same property as their residence, as in a duplex. In those instances only, a resident would be able to get a license for a second vacation rental. While not part of Monday’s action, council members said they would like to revisit the issue of granny flats, which under current rules, could not be used for vacation rentals.

The crackdown on Airbnb-style rentals has the potential to affect as many as 80 percent of the city’s more than 11,000 vacation rentals, estimated Elyse Lowe, the mayor’s director of land use and economic development policy.

Airbnb responded to the vote, releasing a statement to the paper:

“Today’s vote by the San Diego City Council is an affront to thousands of responsible, hard-working San Diegans and will result in millions of dollars in lost tax revenue for the City. San Diego has been a vacation rental destination for nearly 100 years and today’s vote all but ensures activity will be forced underground and guests will choose alternative destinations.”

The bureau’s newly created Office of Innovation, which was created after a dramatic reorganization of the agency, will be led by Paul Watkins, a former lawyer with the Arizona attorney general’s office who set up the FinTech Regulatory Sandbox, a program meant to encourage companies to bounce ideas off state officials.

According to the bureau’s press release, the new Office of Innovation will “focus on encouraging consumer-friendly innovation, which is now a key priority for the Bureau.” The CFPB also announced the work that was previously done under Project Catalyst will be transitioned to this new office.

“The Bureau intends to fulfill its statutory mandate to promote competition, innovation, and consumer access within financial services. To achieve this goal, the new office will focus on creating policies to facilitate innovation, engaging with entrepreneurs and regulators, and reviewing outdated or unnecessary regulations,” a statement from the CFPB said.

In an interview with the Wall Street Journal, Mulvaney said the new office will be looking at different financial tech based on blockchain, private and cryptocurrencies, and microlending.

Mr. Mulvaney in an interview said he expects the bureau’s new innovation office to look closely at cryptocurrencies, other financial technologies based on blockchain, private currencies and microlending, or lending by individuals rather than institutions. The office also could help companies explore alternatives to traditional credit-scoring methods, such as considering rent and mobile-phone payments, consumer shopping behavior and social-media activity in credit decisions.

“You can make a strong argument…that new technology actually offers new and innovative ways to protect consumers,” said Mr. Mulvaney, a former Republican lawmaker and longtime critic of the CFPB. “You are moving light years beyond the complaint hotline to where you can really see things happening in real time,” he added, referring to the bureau’s public consumer complaint portal. The database is popular with consumers but not with financial companies, which say it spreads unverified negative information about them.

The ratings agency reported that while many mortgage loans continue to be modified, the modification rate has dropped considerably during the past six years. The modifications for Prime, Subprime, Alt-A, and Neg Am loan types can be seen in the graphs below: 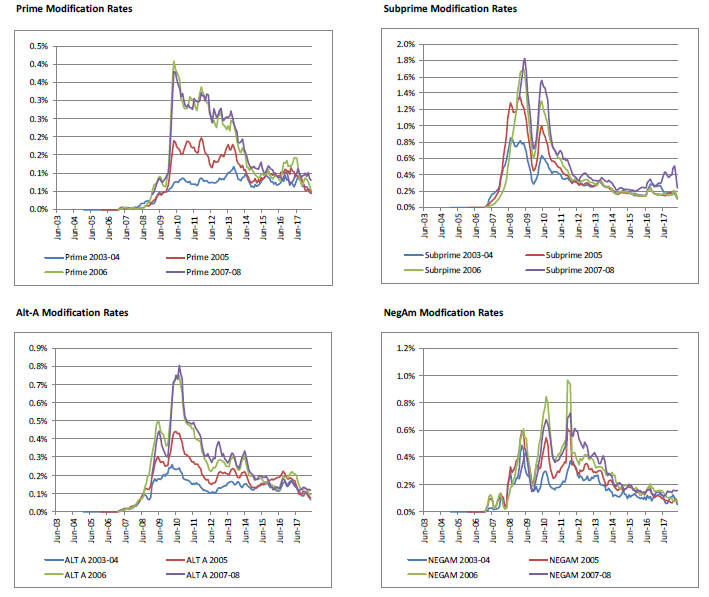 S&P’s report also increased its growth rate forecast for the second quarter to 3.9%, citing healthy economic data for the U.S. economy in May. This is an increase of 50 basis points above its March forecast.

S&P’s economists also said that the economic statistics have increased its confidence in its Fed forecast, the rating agency says it is continuing to expect four Fed rate hikes for 2018 and three in 2019.

But what about housing inventory? S&P said that housing starts are up from last year and the U.S. housing market is continuing its recovery.

Have a good week everyone!