As expected, the Federal Reserve elected to hold off on an interest rate hike in September, however it announced it will soon begin selling off its $4.5 trillion portfolio of bonds.

“In October, the Committee will initiate the balance sheet normalization program described in the June 2017 Addendum to the Committee's Policy Normalization Principles and Plans,” the Federal Reserve announced in a statement.

Click here to read the FOMC’s full plan for quantitative un-easing, which includes the reduction of $4 billion per month in mortgage-backed securities. The pace of MBS sales would then increase by $4 billion each quarter up to a maximum of $20 billion per month.

Here is the plan for the monthly caps, according to the Federal Reserve Bank of New York: 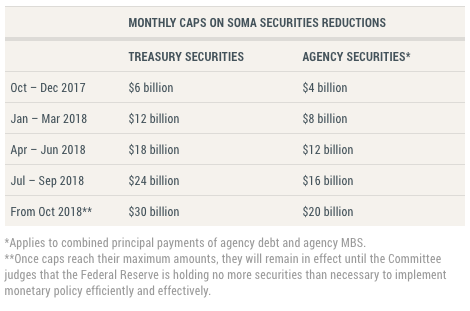 Like the most recent July meeting, the committee voted to keep the federal funds rate at its current range between 1% and 1.25%.

From the FOMC statement:

The committee explained it will continue to monitor labor market conditions, indicators of inflation pressures and inflation expectations and readings on financial and international developments to determine economic health, and that it continues to plan for a gradual increase in the federal funds rate.

A recent CNBC survey indicated the market continues to anticipate a third rate hike this year in December. This is counter to this article that states the Fed is not likely to raise rates based on inflation and growth concerns.