Housing starts took a turn for the worse in May as they decreased from the month and year before, according to the latest joint report released from the U.S. Census Bureau and the U.S. Department of Housing and Urban Development.

Privately-owned housing starts decreased to a seasonally adjusted annual rate of 1.092 million. This is a drop of 5.5% from the revised April estimate of 1.156 million and 2.4% from the May 2016 estimate of 1.119 million. 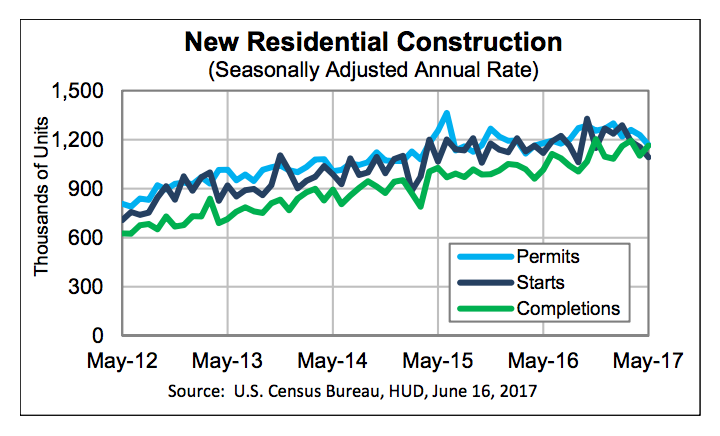 Privately owned housing units authorized by building permits showed the slowdown is not likely to reverse anytime soon as it dropped 4.9% from April’s revised 1.228 million permits and 0.8% from May 2016’s 1.178 million permits to 1.168 in May.

For the single-family sector, the rate dropped 1.9% from April to 779,000 authorizations.

However, privately owned housing completions saw an increase in May to a seasonally adjusted annual rate of 1.164 million. This is up 5.6% from the revised April estimate of 1.102 million and 14.6% from last year’s 1.016 million.

And single-family housing completions were no exception, coming in 4.9% above the previous month at 817,000 completions.

The seasonally adjusted Purchase Index rose 7.9% from the previous week, while the Refinance Index decreased 3.1% in the same period.