Mortgages might be the second most-complained-about product by consumers, but it is the largest consumer financial market in the world, coming in at a value of more than $10 trillion.

As of the start of this year, the CFPB handled approximately 1,080,700 consumer complaints across all products nationwide; approximately 260,500 of those were mortgage-related complaints.

“Today’s snapshot shows that consumers continue to report running into issues when making payments on their mortgages or when trying to overcome obstacles to keep themselves in their homes,” said CFPB Director Richard Cordray.

Of all the mortgage-related complaints filed, more than 80% of them had to do with issues consumers run into when they were making payments, or when they were unable to pay their mortgage.

And as a result, Cordray noted that the bureau will continue to work to ensure that mortgage servicers give consumers the timely and effective assistance they deserve.

This first chart shows the types of mortgage complaints reported by consumers.

The CFPB broke down the reasons behind the consumers complaints related to mortgage servicing, which deals with the paying the loan, and cited top explanations they received. Here’s only example:

Consumers having difficulty making their mortgage payments reported their encounter with servicers while trying to negotiate loss mitigation assistance on their loans. Consumers stated their efforts to obtain assistance went unresolved as servicers were slow to respond, made repeated requests for documents that had already been submitted, and provided denial reasons that were ambiguous.

Looking at different companies, the bureau stated that the top 24 most-complained-about companies for mortgage received about 80% of all mortgage complaints The bureau noted that company size and/or market share should be taken into context.

Here’s a table of the most-complained-about companies for mortgages. 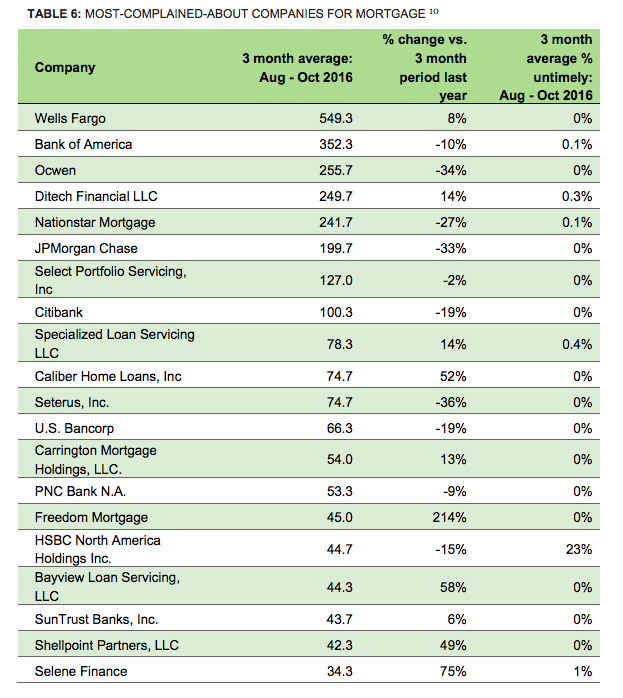