When HousingWire sat down late last year with Nationstar Mortgage CEO Jay Bray to discuss the company’s transformation into Mr. Cooper, Bray said the rebrand is much more than just a new name for the company.

According to Bray, the transformation into Mr. Cooper, which the company originally said would happen in the first half of 2016, is taking longer than first expected because the company is not just rebranding, it’s also reinventing everything that it does.

When HousingWire spoke to Bray in December, he said that the company plans to transition to Mr. Cooper in the first half of 2017.

Now, it appears that the transition is officially underway, as some of Nationstar’s customers recently began receiving letters notifying them that the company will become Mr. Cooper “later this year.”

HousingWire obtained a copy of the letter from a Nationstar customer who we’ll refer to as a “friend of HousingWire.”

A full copy of the letter is below, with the tipster’s personal information removed to protect their privacy. 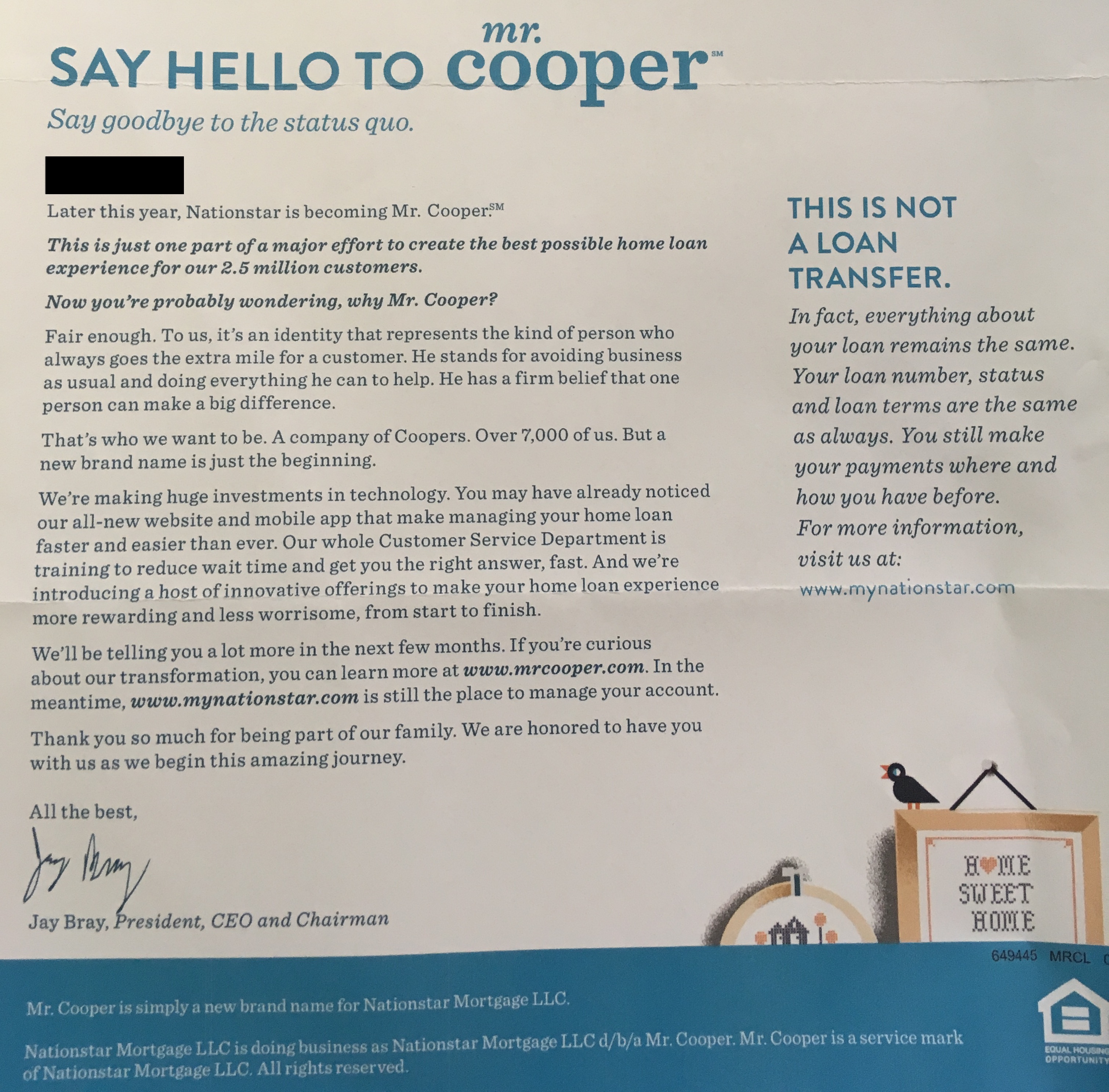 A spokesperson for Nationstar confirmed the letter’s authenticity, and said that the letters are part of a “pilot program,” which is meant to serve as a test run for the full rollout of Mr. Cooper.

According to the spokesperson, the letters were sent to a “small number” of Nationstar’s 2.7 million customers.

The spokesperson also said Nationstar is “committed” to completing the move to Mr. Cooper in 2017.

“Nationstar has made great progress on our journey to become Mr. Cooper and, while we’ve not determined an official launch date yet, we are committed to completing the transformation in 2017,” Nationstar’s spokesperson said. “We have announced the launch to a small number of our customers as a pilot and will use their valued feedback to ensure the full transition to Mr. Cooper happens in the most responsible and customer friendly way possible.”

The letter, which is signed by Bray, begins: “Say hello to Mr. Cooper. Say goodbye to the status quo,” adding “later this year, Nationstar is becoming Mr. Cooper.”

The letter goes on to discuss the company’s reasons for transforming Mr. Cooper and tells the borrower what to expect from the transition.

The letter notes, in large, capital letters, that the change to Mr. Cooper is “NOT A LOAN TRANSFER.”

For borrowers, everything will stay the same, but they will soon begin receiving communication from Mr. Cooper, the letter states.

The letter also answers the same question that many in the mortgage business asked when they first learned that Nationstar planned to rebrand as Mr. Cooper: Why?

“To us, it’s an identity that represents the kind of person who always goes the extra mile for a customer,” the letter continues. He stands for avoiding business as usual and doing everything he can to help. He has a firm belief that one person can make a big difference.”

The letter continues: “That’s who we want to be. A company of Coopers. Over 7,000 of us. But a new brand name is just the beginning.”

The letter goes on to discuss the behind-the-scenes changes that Nationstar has undertaken over the last few years, some of which were shared with HousingWire in December.

The letter touts Nationstar’s new website and mobile app, which launched in December. At the time, Bray told HousingWire that the website had been in development for two years.

The letter also states that Nationstar’s entire customer service department is training to “reduce wait time and get you the right answer, fast.”

The letter also states that the company plans to introduce a “host of innovative offerings to make your home loan experience more rewarding and less worrisome, from start to finish.”

More information will be coming “in the next few months,” the letter continues.

The letter then directs borrowers to visit MrCooper.com for more information, which recently re-launched as a landing page for the borrowers who received the letter.

Nationstar first launched MrCooper.com in July 2016, before pulling the website down after HousingWire reported its existence.

The new MrCooper.com appears to be substantially similar to the July 2016 version.

The website features a series of branding messages, identifying what the company’s goals are for Mr. Cooper, and a video that relays a similar message.

“It’s more than a name change. It’s a change to the way we work with our customers,” the website states. “From new purchases and refinancing to servicing of existing loans. We’re keeping things simple. Focusing on the solution. Putting customers first. All with one single-minded goal: To keep the dream of home ownership alive.”

As with the July 2016 version, MrCooper.com has a video discussing the company’s new brand in more detail. The video appears to be the same one that was on the previous version of the site, recapped in detail here.

One main difference is the addition of a “Frequently Asked Questions” page, which contains more information for customers about the change.

But as Bray told HousingWire and tells his customers, Mr. Cooper is about much more than a name change.

“Thank you so much for being part of our family,” the letter concludes. “We are honored to have you with us as we begin this amazing journey.”

A journey that is now taking a huge step forward.