While mortgage rates remain at the lowest level this year, that could start to change, as the timing looms closer for when the Federal Reserve will raise interest rates again, Freddie Mac’s most recent Primary Mortgage Market Survey said.

“Although there was minimal change in rates this week, the hawkish tone of Wednesday’s Fed minutes release had an immediate impact on Treasury yields, and could possibly shake up next week’s survey results,” said Sean Becketti, chief economist with Freddie Mac.

An article in The Wall Street Journal by Kate Davidson and Jon Hilsenrath reported on Wednesday that the Federal Open Market Committee meeting minutes sent skeptical investors a sharp warning Wednesday that an interest-rate increase is still in play for June’s policy meeting if the economy keeps improving.

Until a few days ago, traders in futures markets saw almost no possibility the Fed would move short-term interest rates up at midyear. However, a batch of strong economic data, recent comments by Fed officials and a new release by the central bank on the deliberations at its last policy meeting have changed that perception.

Just as many predicted, the Federal Open Market Committee elected to hold steady and not increase federal funds rate in its most recent meeting. 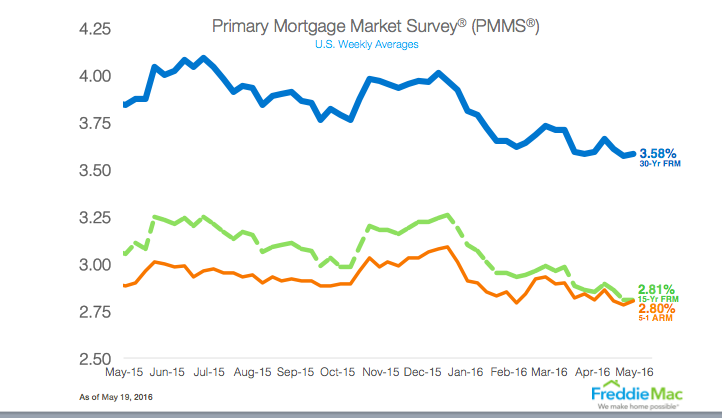 The 5-year Treasury-indexed hybrid adjustable-rate mortgage averaged 2.80% this week, slightly up from last week when it averaged 2.78%. A year ago, the 5-year ARM averaged 2.88%.