The California housing market remains stifled by a shortage of homes for sale and low housing affordability.

Statewide, pending home sales in California dropped in January on a year-over-year basis for the first time since August 2014, the California Association Of Realtors reported.

On a monthly basis, CAR said California pending home sales rose from December, primarily due to seasonal factors, with the PHSI increasing 21.1% from an index of 79 in December to 95.6 in January.

The housing market as a whole can’t seem to get past the inventory shortage that keeps penetrating into all crevasses of the industry. And while this won’t change this year, there may be hope for next year as builders start to play catch-up, a Fitch Ratings report recently said.

Broken up, pending sales also were lower on a year-over-year basis in all areas, with all regions recording double-digit, month-to-month increases in pending sales.

This chart shows year-to-year changes in pending sales by county/region. 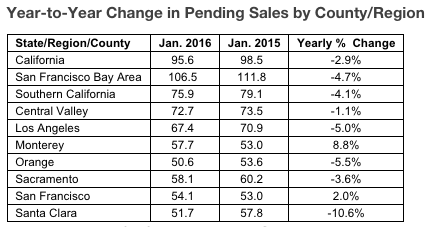 In January, CAR reported that California existing single-family home sales totaled 383,670 on a seasonally adjusted annualized rate. This is down 5.4% from December 2015 and up 8.8% from January 2015.