Monday Morning Cup of Coffee takes a look at news coming across HousingWire’s weekend desk, with more coverage to come on bigger issues.

When will the Federal Housing Finance Agency Conservatorship Scorecard be released and what will be in it? Glad you asked.

“We expect the FHFA Conservatorship Scorecard to be released between mid-December and mid-January but there is growing chatter that an early December release is possible,” he says in a client note.

He expects the following coverage in the scorecard:

1. An increase in the risk-sharing dollar targets for Fannie Mae and Freddie Mac from their current levels of $150B and $120B, respectively;

2. An explicit goal for up-front risk-sharing transactions which should provide an opportunity for a deeper PMI pilot; and

3. An expansion of the loan categories considered exempt under the $30B per GSE multifamily lending cap.

Which leads to the next question, will the Federal Housing Administration lower its premiums?

“There has been an uptick in client interest regarding the upcoming FHA actuarial report, the potential for another FHA pricing change, and the resulting impact on private mortgage insurer market share,” he says. “We expect the mid-November FHA actuarial report will show that the health of its flagship fund – the MMIF – continues to improve which will set the stage for a push by both industry and consumer groups to once again alter FHA pricing.

He said he doesn’t believe that the FHA will lower its annual MIP as the 50bps reduction in January 2015 was proportionally significant and helped facilitate the recent market share shift. Secondly his sense is that if the FHA does decide to lower its pricing it will likely focus on its UFMIP.

“As a matter of context, when the FHA proposed its HAWK program last year it offered a 50bps UFMIP and 25bps annual MIP reduction for borrowers who entered counseling programs,” he says. “Therefore, for those anticipating a FHA pricing change, our view is that a 25-50bps cut of the UFMIP is the most to expect. Third, while the FHA could reverse its 2013 cancelability decision our view remains that the policy cost/benefit equation for doing so makes a change unlikely.”

Although the mid-November actuarial report is likely to show a healthy MMIF, political and market share dynamics lead his team to believe there is only a 20% likelihood of another pricing change at FHA in 2016.

We talk a lot about household formation as key driver in home sales, but there’s an issue few focus on in the macro-sense — how stronger traditional family structures translate into not just more home sales, but more prosperous economies.

The American Enterprise Institute looked at the issue and their conclusion is strong families translate into more prosperous state economies.

“Economics has its roots in the Greek word oikonomia, which means the ‘management of the household.’ Yet economists across the ideological spectrum have paid little attention to the links between household family structure and the macroeconomic outcomes of nations, states, and societies,” their report says. “This is a major oversight because, as this report shows, shifts in marriage and family structure are important factors in states’ economic performance, including their economic growth, economic mobility, child poverty, and median family income.

Standard & Poor's Ratings Services has said that in the seven years since the Great Recession began, a number of key economic factors have reverted from their short-term extremes, but one telling trend for the nation's economy that hasn't yet reverted to its historic norm is the homeownership rate.

Home prices are rebounding, unemployment is declining and optimism is rising–at least among economists — that the U.S. economy may finally be strong enough to withstand a rate hike from the Federal Reserve.

But when considering the rising renter population and tougher mortgage qualifying requirements over recent years, "it's not surprising that the homeownership rate dropped to a 50-year low of 63.4% in first-quarter 2015," said Standard & Poor's credit analyst Jeremy Schneider.

To the extent that prices continue to increase at a faster pace than wages, they say they see one or more of the following shifts in the mortgage market:

The Mortgage Bankers Association is projecting that home purchase originations will increase in 2016 as the US housing market continues on its path towards more typical levels of housing turnover based on steadily rising demand and improvements in the supply of homes for sale and under construction. 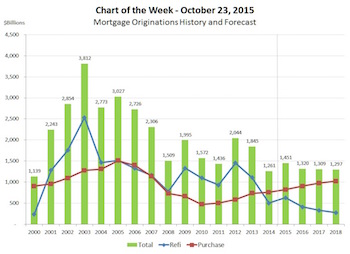 “Despite bumps in the road from energy and export sectors, the job market is near full employment, with other measures of employment under-utilization continuing to improve,” Fisher and Kan say. “We are forecasting that strong household formation, improving wages and a more liquid housing market will drive home sales and purchase originations in the coming years.”

Looking to the week ahead, Monday will see the report on new home sales for September.

New home sales can move wildly, as they did in August and July with gains of 5.7% and 5.4%, but that won’t make up for the expected 0.6% decline that analysts forecast.

Supply has been very low, at 4.7 months in September, but prices have been showing very little life with the median up only in the mid single digits.

On Tuesday the home price report for August from S&P Case Shiller drops. Data have been soft and more of the same is expected for August. The report is expected to only see a 0.1% gain, if at all.

Prices for existing homes haven't shown much reaction to the very low levels of supply on the market, as sellers, despite the strength in sales, are still giving concessions.

Thursday we get to see how much economic growth is slowing, with the first report on third quarter GDP. Even the best estimates right now come in around a mere 1.7% growth in the first estimate for the third quarter. Wide slowing is expected though residential investment, in a reflection of housing strength, is expected to be a plus.

Also on Thursday,  pending home sales for September is scheduled for report by the National Association of Realtors.

Pending home sales are expected to bounce back from August's 1.4% decline with a 1% gain in September. Sales of existing homes, boosted by low mortgage rates and moderate prices, have been strong this year though they did slow during the summer.

No banks closed the week ending October 23, according to the FDIC.