Though mortgage delinquencies rose about 2.5% month-over-month in August, the national delinquency rate saw the largest year-over-year decline since May 2011, down 18.2%, according to the latest report from Black Knight Financial Services.

In raw numbers, that amounts to about 42,000 newly delinquent borrowers in August, but total non-current inventory — everything 30 or more days past due or in foreclosure — is still down by 766,000 since last year.

The monthly prepayment rate, historically a good indicator of refinance activity, continued its decline, falling 15% from July, but still up about 11.5% from last summer.

Due to an increase in repeat foreclosures, those who had been in active foreclosure, then shifted back out to either current or simply delinquent status, but who have now returned into foreclosure, Black Knight saw approximately 80,500 foreclosure starts in August, a nearly 7% increase from the month before.

At 696,000, the number of borrowers in active foreclosure is the lowest it’s been since November 2007.

Every one of the 50 states saw improvement in its non-current inventory over the past six months, from Wyoming's 0.7% improvement (which had a low non-current population to begin with) all the way to Florida's nearly 18% reduction. 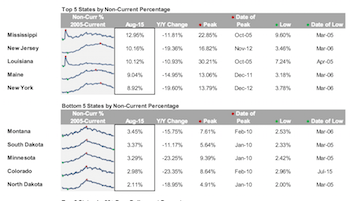 Mississippi still leads the nation in both total non-current inventory and the highest share of seriously delinquent loans (90+ days past due, but not yet in foreclosure), although even that state has seen significant year-over-year improvement.