Comments from Kevin Watters, CEO of Chase Mortgage Banking, earlier this week that the Federal Housing Administration’s loan requirements look an awful lot like subprime lending incited quite the debate on social media over what exactly is subprime lending.

In an interview with CNBC on Monday, Watters said, "FHA requirements are down to a 520 FICO (credit score) and you only have to put 3.5% down; that's subprime lending, and we're not in the subprime lending business."

The statement caught the attention of social media because the two appear to be paired together. Even though 3.5% down mortgages are available and mortgages for a 520 FICO score are available, the two are not offered together, a fact which Watters is keenly aware. It sparked a debate, to be sure. Watters' comments earned plaudits as well as some crass criticism.

According to the FHA, this is not an accurate representation of FHA’s credit requirements.  Borrowers with FICO scores between 500-579 are required to contribute a 10% down payment.

Watters made the comments in light of the U.S. Department of Housing and Urban Development’s revision to its previously announced proposal to change the FHA loan level and lender certifications that each lender must adhere to. JPMorgan did not provide a comment at time of publication; we'll update when they do.

The previous proposal eliminated the requirement that lenders approved by the FHA certify on each loan application that they are not, or have not recently been, subject to certain charges or penalties.

The new proposal from HUD reinstates that stipulation, but made it part of the annual lender certification instead of the loan level certification, as it was prior to the first round of proposed changes.

Nick Timiraos, national economics correspondent with The Wall Street Journal, pointed out the issue on Tuesday.

CEO of JPM's mortgage unit gets this wrong. FHA requires a 10% down payment below a 580 FICO http://t.co/EEXVWpZonU pic.twitter.com/XtR7etoVw6

@NickTimiraos they should require 30%. In any event, that shouldn't negate the main point that Watters is making here.

For what it's worth, the comparison to the subprime generated a lot of uproar on HousingWire’s Facbook, noting that the FHA loans are in no way similar to the NINJA loans. 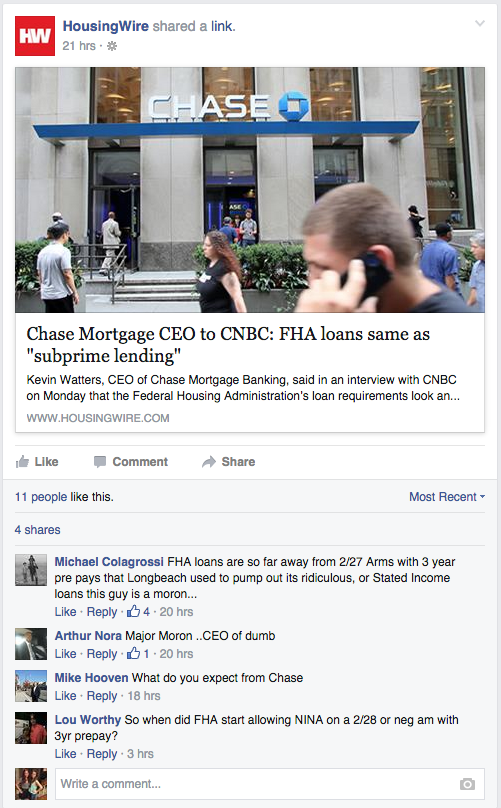 Meanwhile, commenters on an earlier HousingWire article strongly agreed with his stance on subprime lending. 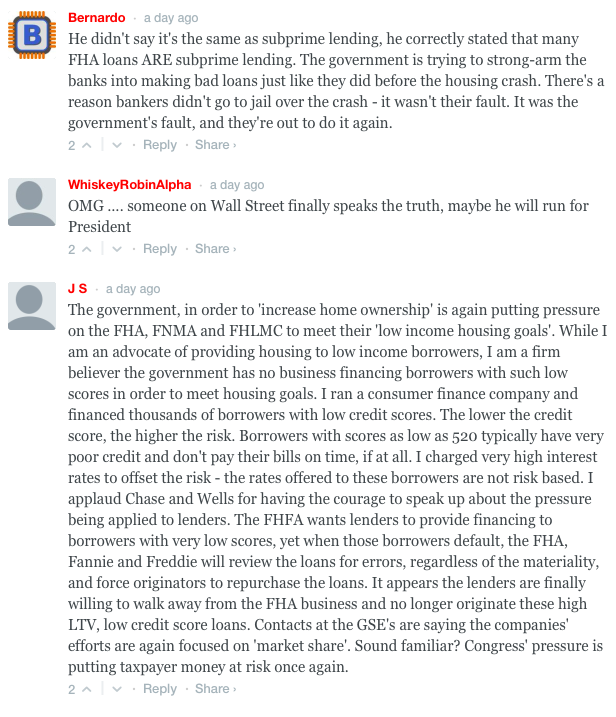 JPMorgan Chase (JPM) named Watters as taking over as CEO of mortgage banking at Chase. HousingWire profiled Watters in the March 2013 issue.