A new report from CoreLogic (CLGX) identifies 14 of the top 100 markets in the U.S. as currently overvalued, double the number as of the end of the first quarter 2015.

The analysis expects the national housing market to remain within the normal range (+/- 10%) of the long-term sustainable level through 2017, with most of the top 100 markets at value. 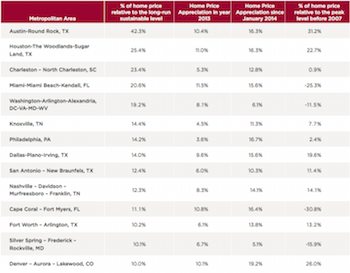 "Home prices in five Texas markets are well above their historical peak levels partly due to strong job growth and to the absence of the severe boom-bust housing cycle that was seen elsewhere," CoreLogic reported. "Between 2006 and 2014, an oil and gas boom had fueled job and population growth in some markets, pushing home prices well above their sustainable levels in these markets.

"Since last year, geopolitical events have shifted in favor of excess oil supply, possibly exerting further downward pressure on oil prices in the next few years and impacting some of these Texas markets. The areas that have become overvalued since last quarter are: Cape Coral, Fla., two Tennessee markets, Knoxville and Nashville – Davidson – Murfreesboro – Franklin, philadelphia, Silver Spring–Frederick–rockville metro in Maryland and Denver–aurora–Lakewood in Colorado. as home prices have risen significantly since 2013, homes have become less affordable, and therefore, home prices less sustainable," the reports says. 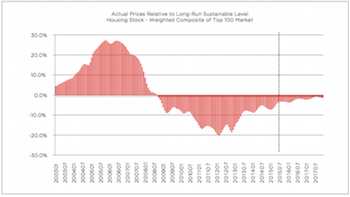