In August of 2015, 84% of purchase mortgage applications in Mortgage Bankers Association’s Weekly Application Survey were for loans less than $417,000, the conforming loan limit in many geographies.

Compared to August a year ago, the number of applications for mortgages greater than $417,000 grew by 37%, they note. 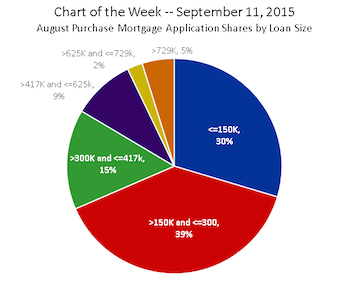 Growth in applications for the smallest loan sizes was slow to appear in 2015 but continued on a slight positive trend in August, growing 3% relative to a year ago.

“We expect further normalization of housing demand next year,” they say.